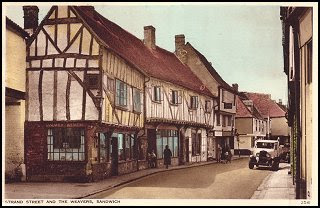 A hand-coloured postcard showing a decidedly ancient lorry is my offering for today. The caption reads "Strand Street and The Weavers, Sandwich".

Which probably means the shops and cottages were originally weavers' cottages from the times when cottage industry was the main source of income for many of England's population.

A sign painted over the window at the near end of the row says "Sandwich Weavers" and that sent my (admittedly weird) sense of humour off on a tangent!

I've only been to Sandwich once. It was during a holiday in 1999 when we stayed for a week in Hastings and toured around the Cinque Ports and the south eastern corner of Britain. 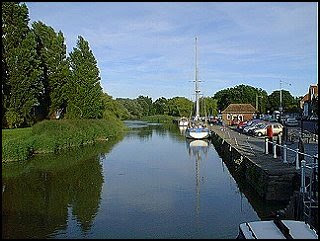 There's a lot of England's history to be found in that part of the country and some lovely countryside too. One of my websites is devoted to that holiday if you want to see what we got up to.

This is one of the few photos of Sandwich that I took and it gives a totally different view and impression of the place. I took it from an old toll bridge that was a controlled way into the town. The gatehouse still exists with a list of tolls for various forms of conveyance.
Posted by John Burke at 08:08