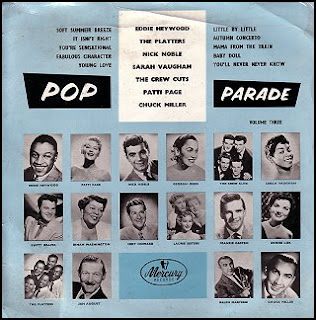 Whenever I'm in Keswick I invariably go to have a browse through the old records at my favourite antique store.

This time I came away with half a dozen 78rpm records and this old 10" early LP. "LP" stood for Long Player; in an era when records had been just a single song per side for 40 years, having a record that delivered 5 tracks on each side was a novelty and the name summed it up.

Later LPs were standardised at 12" and could fit 20 minutes of music per side.

This example is the Pop Parade volume 3 an early compilation album. The artistes seem to be all American. They rejoice in names like Rusty Draper, Nick Noble and Jan August (who wears a suit and tie and sports a moustache). There are some well-known names there too - The Platters, Dinah Washington, The Crew Cuts and Patti Page.

Well, to be honest, they are all shown on the front cover. Sixteen artistes are shown. There are only ten tracks on the album though and they are delivered by only seven of the artistes shown!

The record itself looks in excellent condition and I'm looking forward to having a listen. So far I've only looked fondly at it...
Posted by John Burke at 07:44