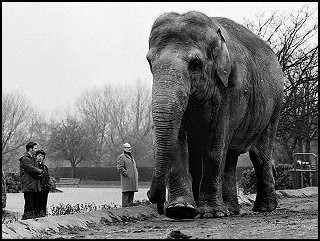 Desperately casting about for something to say...

I see from the archives that 17 years ago on the 4th March we took our daughter Gillian to Chester Zoo. She was 4 at the time and by a coincidence so was the date and probably so was the temperature!

So was the baby elephant that had been born in the Queen's Silver Jubilee year and was therefore named Jubilee. Ha - why did we not think of that. See, Gill, you could have been Jubilee Burke!

The elephant shown here is not Jubilee but a bigger one. In the language we used on the day probably either Mummy Elephant or Daddy Elephant. Gill's expectation of our language has developed a bit since then. My own mother's seems to have reverted though, but now I'm digressing...

She's just got back from a week in the Costa del Sol which seems to have been more of a Costa del Pour-Down from all reports. My brother Frank and his wife took her this time and we are booked to take her away later on in the year.
"Think of it this way," Frank reflected, "it'll broaden your horizons..." 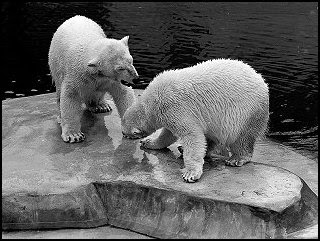 Back to the Plot
During the early 1980s I was occasionally freelancing photos to magazines and the photo here was taken on that visit to Chester and was published in a Club Canon magazine and then picked up by a photo developing house and used in their promotional leaflet.

I got about a fiver for each use. Five pounds was worth more then than now but it was still not a viable way to earn a living!
Posted by John Burke at 17:49