I love this! On the back of this postcard it says "This is a real photograph." In actual fact it's a bit of a pre-digital mash-up. There's at least two photographs plus a great deal of a painter's imagination here! 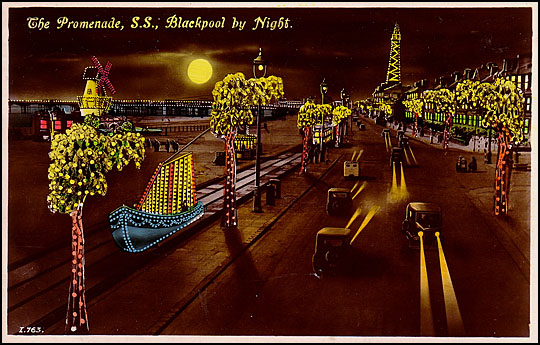 I can confirm that it's the tower at Pisa that leans, not Blackpool Tower, and the tram in the foreground is smaller than the tracks it's supposed to be running on! That's the other photograph sitting under all that paint. All the illuminations are painted on, in fact, as are the rather fanciful headlamp beams of the cars. Dipped headlights in the UK point to the left of the vehicle. Even on full beam they point ahead, not to the right!

I suspect the main photograph was originally taken during the day when the sun was shining. There's too much detail otherwise and the area in front of the row of hotels is a bit of a giveaway. Come to think of it so are the shadows! Not every lamp post has one and the shadows of the cars are in a different direction to those of the illuminated laburnum trees!

The card was sent to an address in Hertfordshire on 9 July 1945. The writer packed so much onto the card that he or she had no room left to sign it! So unless the recipient recognises it then we'll never know who it was that sent it.

The card says (spelling and grammar as is): Dear Annie just a card to let you know we are having a nice time the weather as been good to us this time, been nice, we have got about a bit but it is so very crowded every were it tires you out. We are going to South port to morrow, for the day, all the shows are booked up, but we managed to book for the circus last Monday for Wed. afternoon this week. Hope you are well, love to your sister.