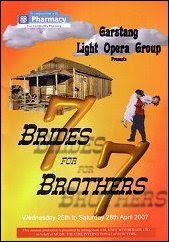 Last night we had the most excellent night out. We went to the Spring offering from GLOG - the Garstang Light Opera Group - who were staging "Seven Brides for Seven Brothers".

Band member David Lancaster is a member of GLOG and was playing the part of the Preacher. As usual he put in a fine comedic turn with lots of face pulling and a few ad libs here and there. There were some fine performances from Marion Gaughan as Milly and Roger Lloyd Jones as Adam and I must especially mention some of the younger members of GLOG who turned in blinding performances as the brides and brothers.

The more experienced of the cast being chastened to realise the script would have needed rewriting a touch as "Seven Widows for Seven Divorcees" perhaps? No matter! I always remember the excellent line from "42nd Street" which goes something like "Son, I've been playing juveniles on Broadway for 15 years and no one is going to tell me..."

As it was the last night for the show the cast traditionally have a last night after the show party, the last few of which Fran and I have been privileged to attend. I travel too much to be able to attend rehearsals to be a member, but the band play GLOG's fund raising evenings and I've sort of been adopted as a sort of associate member! In order that both David and Jeannie (who works behind the scenes) can enjoy the night I've always driven on these occasions.

Last night the party was held in the Church Inn, giving David the chance backstage to adopt his Preacher persona and announce "Everyone to the Church!". GLOG Chairman, Peter Cooney and I took along accoustic guitars and after the hotpot supper we gathered the cast of the show around us for a couple of hours of sing-a-long fun to the music of the Everly Brothers, Dylan and more...er.. did I somehow launch them into Queen's "Bohemian Rhapsody???"
Posted by John Burke at 13:50