Monday 25 April 2016. We are now starting our second week in Walt Disney World and it's starting to feel like an entire world too... We are meeting up with the family for a meal later at Disney Springs, but before then we decide to have a look at a park that didn't exist when we last came to Florida in 1993: Disney's Animal Kingdom. 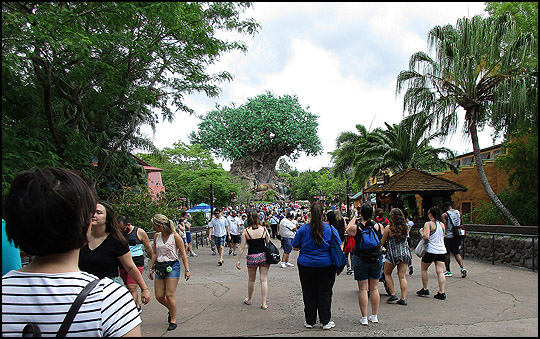 It was a bit of an overcast day, but it was still very hot. In fact it reached 92 degrees Fahrenheit this day and from now on would get hotter! 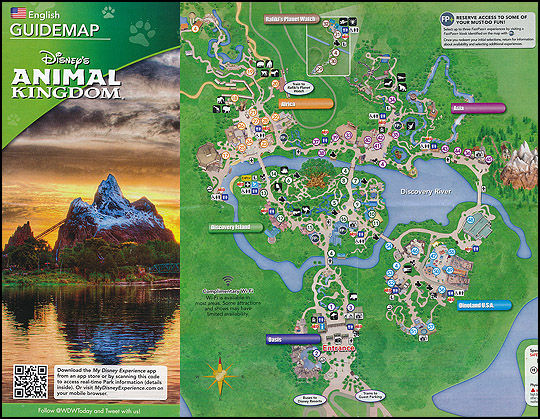 This has a very different look and feel to the other Disney parks. Nature plays a much greater part both in attractions with animals and in the lush vegetation that forms the background and surroundings. We both found the humidity was hitting the roof, making this feel much hotter than the other parks. Drinking regularly is a must. There had been an Island of Discovery at Fort Wilderness in 1993. This had a collection of both wild and "displayed" animals, but was closed in 1999 after a guest died through swimming in the lake in which the island sat. His death was put down to his having swallowed an amoeba, a microscopic animal, from the water and people are kept well away from it these days. 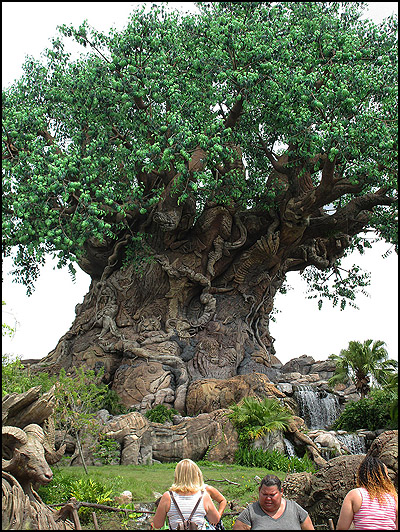 The name is remembered in Discovery Island in the middle of Animal Kingdom. This is the hub of the park with trails leading to the various main areas. The 145 feet tall artificial baobab tree which is somewhat magnificent, covered in sculpted animals. 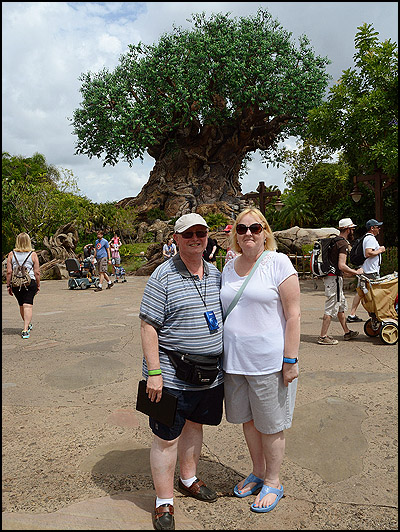 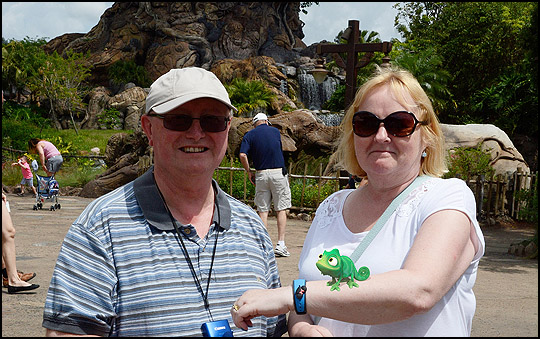 We have our photos taken and they ask Fran to hold her arm out. A little green cartoon chameleon is added! I somehow have the feeling that Miss Franny would not be so relaxed and smiling if they had tried to plonk a real one on her arm... 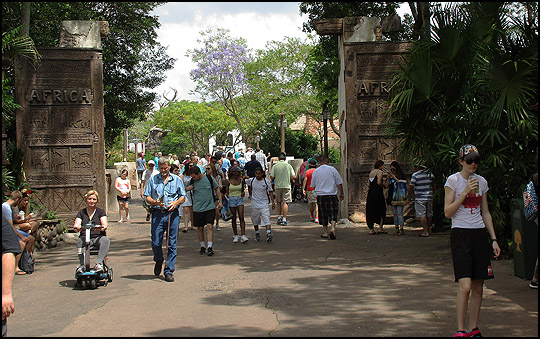 We pass through the Gates of Africa. The park closes earlier than the other parks as the many animals are returned to their pens for the night. They mostly do this of their own accord and the process takes around two hours, which for safety has to be completed before it goes dark. 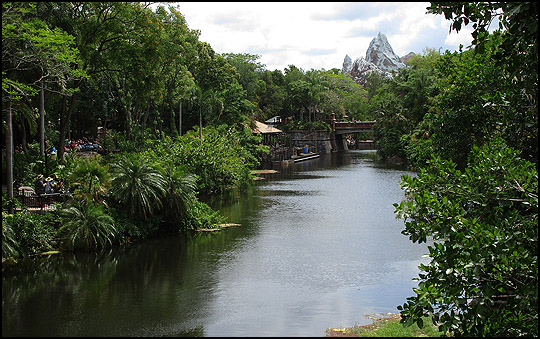 Once through the gates we have to cross Discovery River, seen here extending into the Asia section of the park with Mount Everest at the rear.. 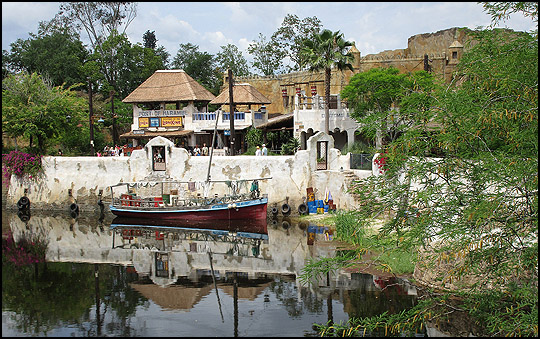 Harambe is a fictional village in East Africa. It has restaurants, refreshments stalls and shops all with African-themed products. There's a 30-minute version of The Lion King presented Broadway or London West End theatre style with actors, dancers, puppetry and music. 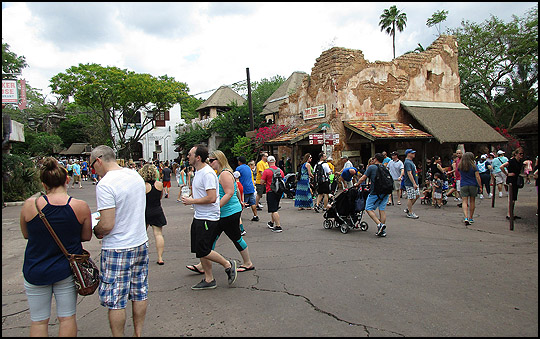 The deliberate "distressing" of buildings creates a very different feel to that of the other Disney parks! Other little touches like low-slung wires across the street or spider's webs of electrical or telephone wiring on the sides of buildings all adds to the feeling of being in a less affluent environment. 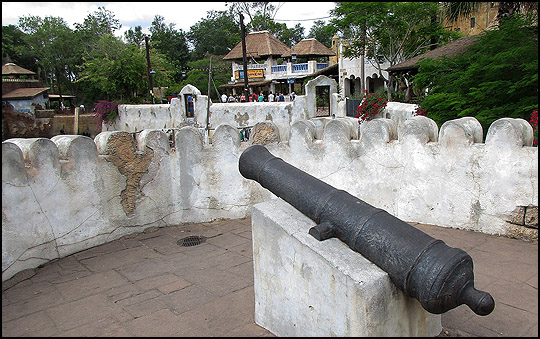 A cannon reminds us of colonial times. Great Britain, Germany, Italy and Portugal all had colonies along the East African coast with the island of Madagascar coming under the French. Each jealously guarded their dominions. 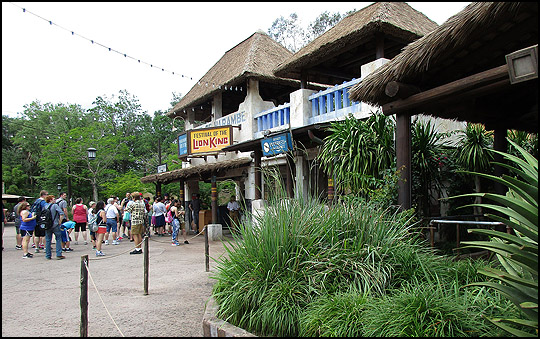 A line forms at the Festival of The Lion King show. It being a show, the start times are known so it's only worth going well before time if it is likely to be over-capacity. 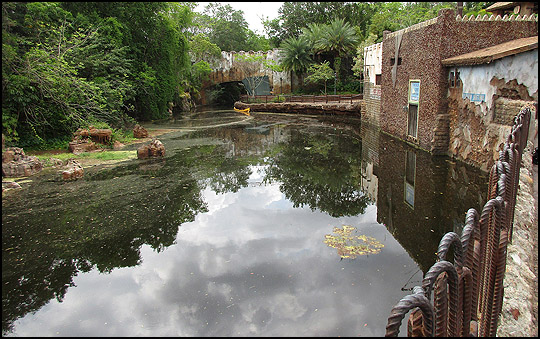 A sign warned of crocodiles. I wasn't sure if it was meant to warn of real danger or just set dressing. There are crocs and alligators a-plenty in Florida, but as far as I know they are removed from Disney property, particularly if large. That being said, they roam Florida wild, there have been reported sightings even in Magic Kingdom in the past. The only one I saw this entire trip however was at the side of a pond as we were on the bus from the airport to our resort. 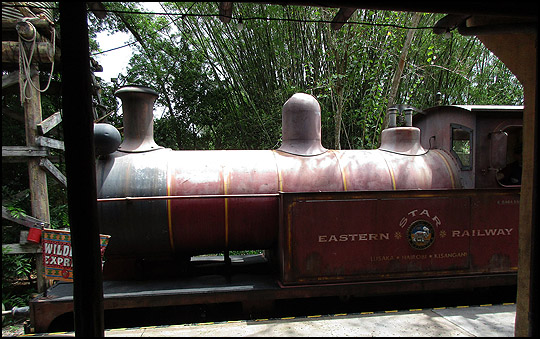 We took a ride on the Wildlife Express Train. This goes between the Africa area and Rafiki's Planet Watch on a round trip and goes through some backlot areas where the animals are housed at night. We saw a couple of white rhinos in one compound but most were empty with the animals being out in the open where they could be seen on the safari rides. 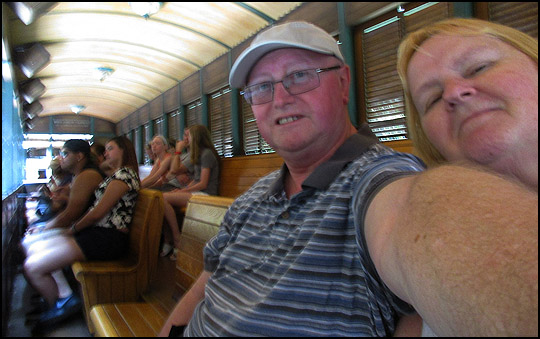 Unlike the more usual carriage, seats were arranged to give a view out of the side of the open coach. 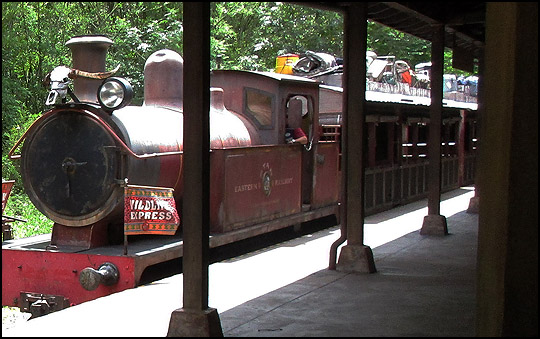 And back at the Africa station again. We'll take a safari through Africa on another visit. I waited before exiting to get a shot of the train pulling in. There were two trains running and the round trip takes around 10-14 minutes. 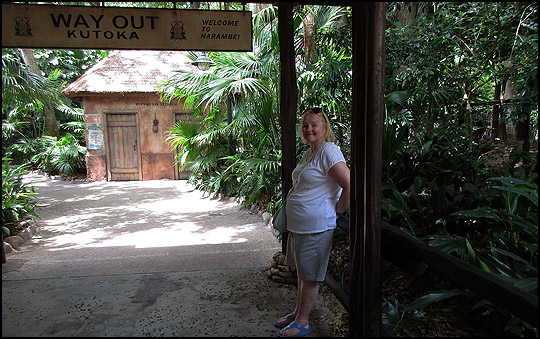 It was quite cool under the shade of the station - we were almost reluctant to go back out now as the sun had come out and the temperature was soaring up! 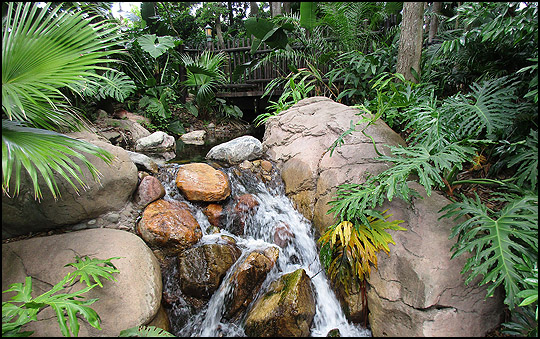 Following the path round the back of the park, we leave Africa and pass into Asia. In normal circumstances that would be one heck of a walk...! 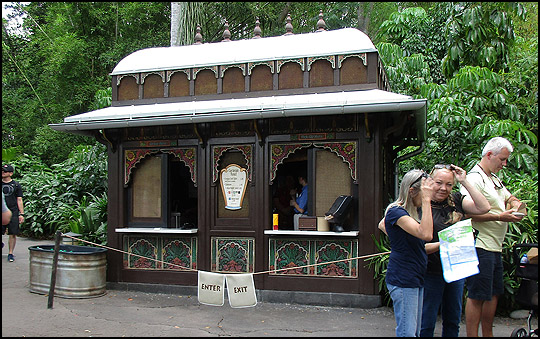 The props, buildings and kiosks change in nature and now we are on the Spice Road. If you ever wish to know what in your house has caused the most deaths and misery to people throughout history - just look at those two little shakers in the centre of your dining table... 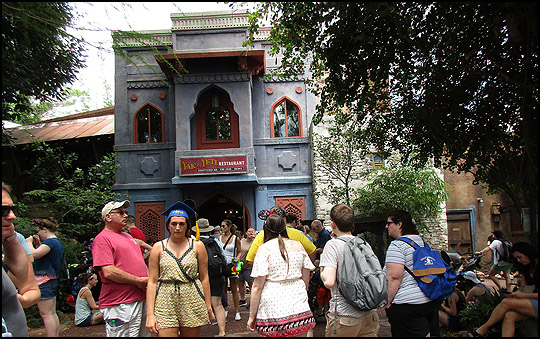 We are walking through the sights of India, Pakistan, Nepal et al on our way to the mighty Himalayas. The Yak and Yeti Restaurant ("Mummy, I don't like yeti..." "Well leave it at the side of your plate, Harvey") actually sells Asian and Mandarin style chicken. 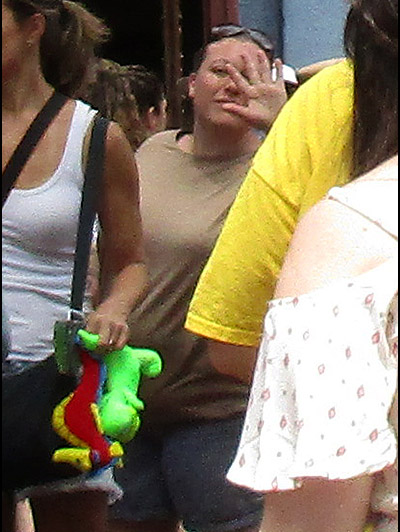 Just let's have a closer look at that previous photo - that seems to be a lady desperate not to be photographed... Sorry! 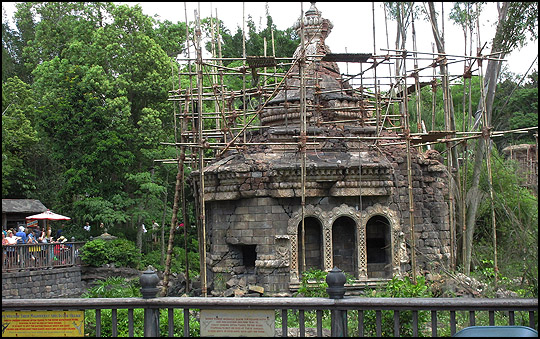 We pass a part-ruined shrine. There are two gibbon monkeys playing and hiding amongst the scaffolding if you can find them. If you can't see them, there's a closer look at the same photo below. 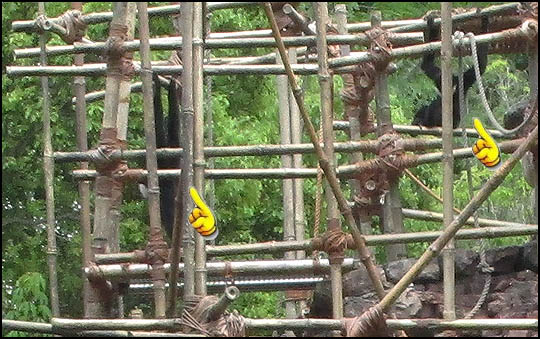 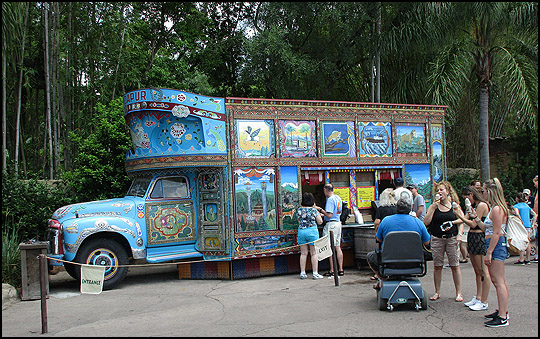 A little spot of India, selling soft ice cream. Actually, soft or hard didn't matter - it was all soft within a few seconds... 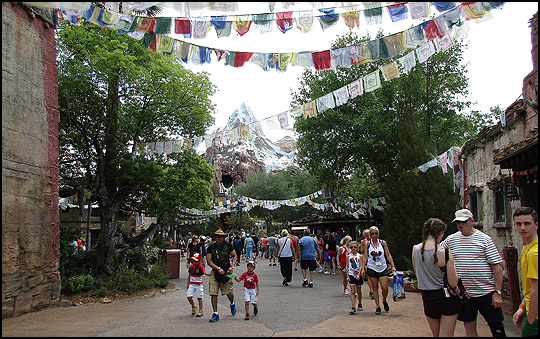 We are approaching Mount Everest in the distance. 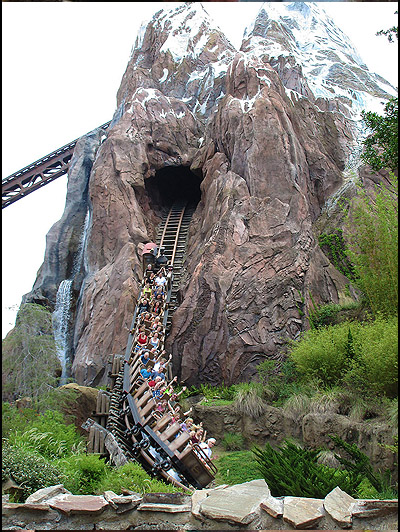 The mountain, home of the Yeti, has a coaster ride, Expedition Everest - Legend of the Forbidden Mountain. Possible the roller coaster with the longest name...

The mountain itself contains loads of hidden sculptures of animals all of which need to be seen from just the right angle for you to see them. I'll just point you to a few. Above and to the left of the clump of bushes on the right of the mountain's base is a seated elephant. The coaster's lift hill at the left passes behind a bluish rock which is a gorilla's (or Yeti's) head. Just down and to the right of that is another face. They are quite small on here, but take my word for it, they are there! 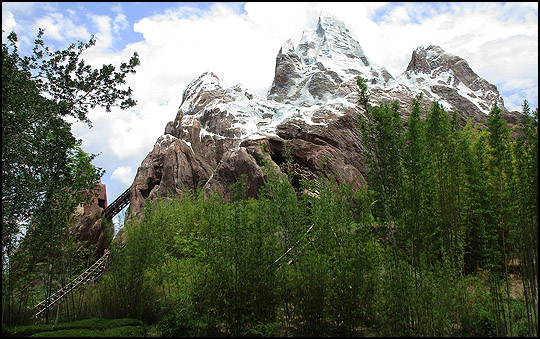 On this view, find the hole where the train comes out in the previous photo and compare the two photos. In the first it's just rocks, but from this angle there is clearly an animal's face. We're still not quite in the exact position to see it properly, but the dark area makes one eye with cheek bone beneath and it has a long nose. Very clever!