Disney Be Our Guest Breakfast and Magic Kingdom

Wednesday 20 April 2016. It's a new day. It's a hot day. We are up early and at the bus stop in Disney's Caribbean Beach Resort. There are separate buses for The Magic Kingdom, EPCOT, Hollywood Studios, Animal Kingdom and Blizzard Beach (a water park), Disney Springs and Typhoon Lagoon (another water park), and an Internal bus that did the rounds of the various stops in the Caribbean Beach Resort including the Custom House which was the resort's front desk. 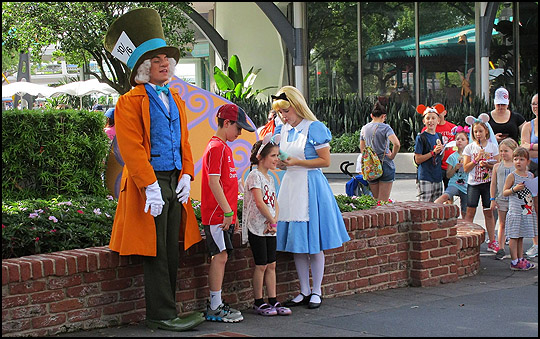 A monitor screen updates with the expected time of each bus. We caught the first bus for the Magic Kingdom and once there, made our way quickly through to the back of the park as we were booked in for breakfast for 8:25am in the Beauty and The Beast themed Be Our Guest Restaurant.

Alice and The Mad Hatter were already posing and signing autographs. 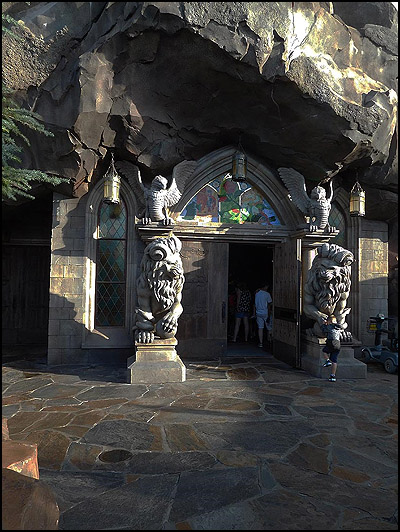 The restaurant is right at the back of the park and represents the Beast's castle, forbidding and dark on the outside. 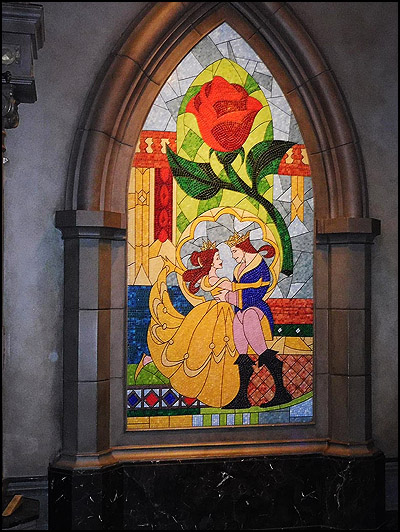 Inside though the foyer is lit by stained glass windows, telling the story of the bewitched prince who is rescued by the love of Belle the village girl. 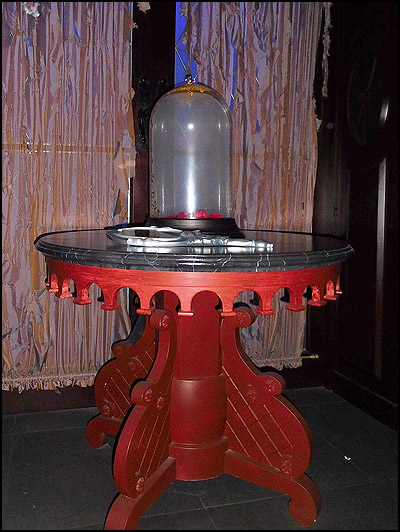 In a dark corner, the rose that is the Beast's life slowly decays and drops its petals. Even by the time we had finished breakfast and were ready to leave, things were not looking good for poor old Beastie-poos... 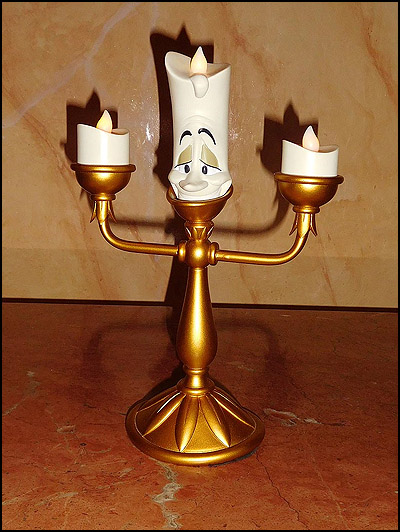 Now if you remember (and if you don't remember because you've never seen the film then !!!SPOILER ALERT!!!) the Beast's servants were all turned into household items by the curse that turned him from an ugly prince to a handsome beast.

Lumiere, the suave sophisticated, witty (I hate him already...) candlestick who used to be the lavatory attendant (well, I'm sure it was something like that...) stands with a smug look and a trimmed wick on the window sill. 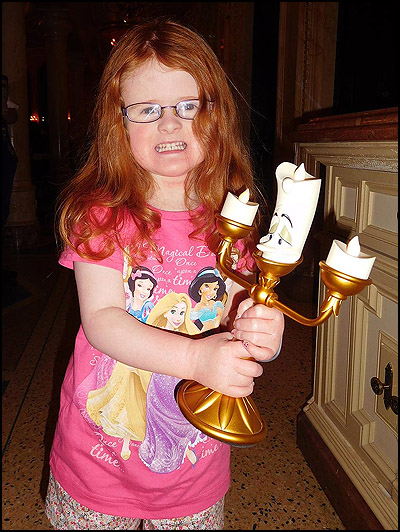 Er... Grace, should you have picked that up? You'd better put him down before he gets waxy... 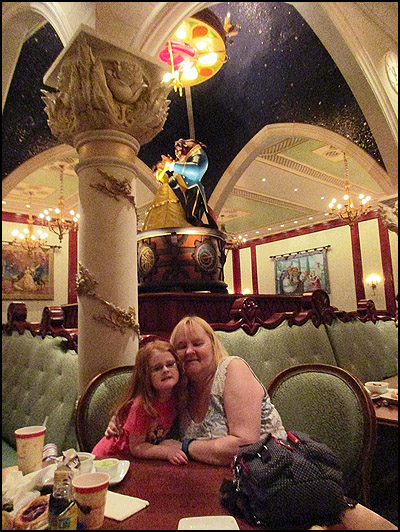 The Be Our Guest Restaurant has a large dining room, that could almost have been the Beast's ballroom. We are in a small side room with a central statue on a square podium of Belle dancing with her Beast and a double row of tables around the room. 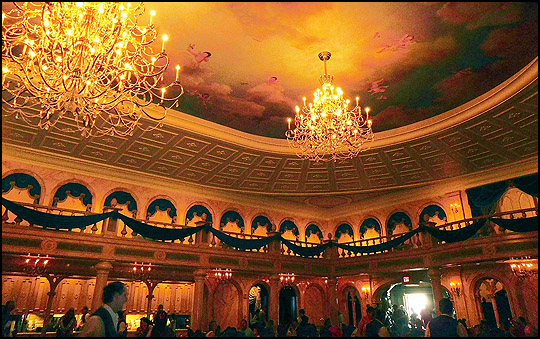 This gives an idea of the main dining room. Meals are brought to your table whilst drinks are self-service and available from several beverage spots. 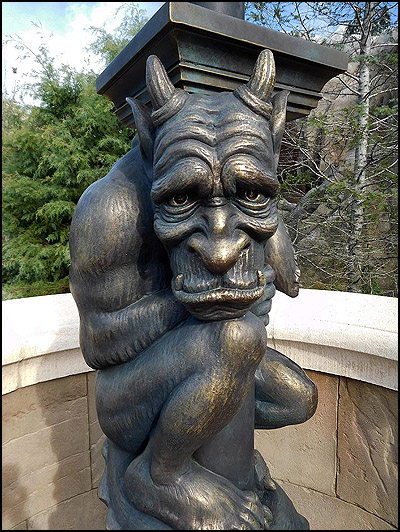 Outside the restaurant was this sad-looking fellow, bemoaning the desperation that led him to the castle on that fateful night of the curse, to climb the flagpole to nick the flag to make a dozen dishcloths... (!!! NOT A SPOILER !!!) 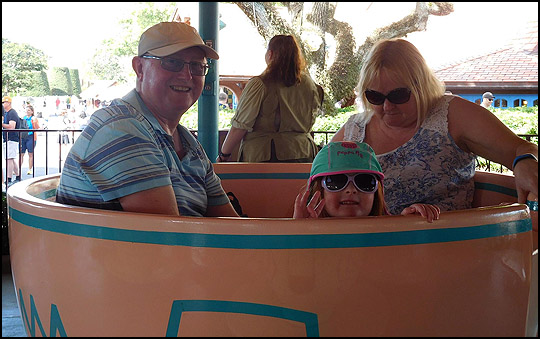 Yesterday we covered Adventureland and Frontierland so today it will be mainly Fantasyland and Tomorrowland. We pass The Mad Tea Party and take Grace for a twirl in a teacup! 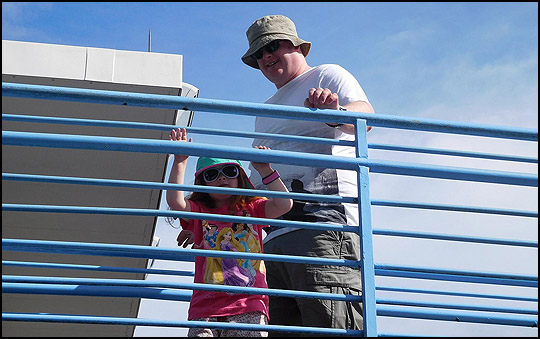 Then she's off with her Daddy to ride the Tomorrowland Speedway, one of the few rides to survive from the original opening of the park in 1971. At that time it was called The Grand Prix Raceway. 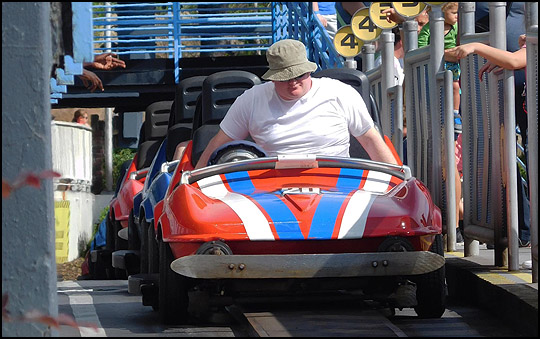 Well, she's there somewhere... Either she's driving with little chance of seeing where she's going, or Daddy is sitting on the wrong side of the car! Which leads me to the question: in a land where everyone drives on the right, why are the cars all right-hand drive??? 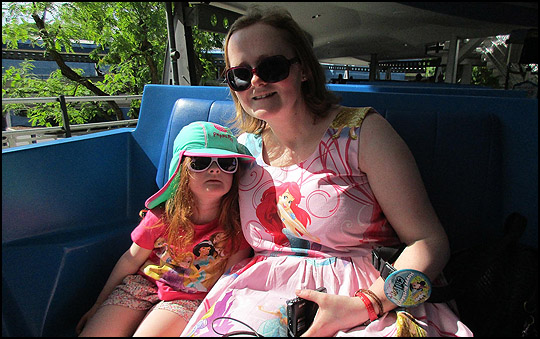 Whilst Eddie nips off for a go on Space Mountain the rest of us jump on the Tomorrowland Transit Authority PeopleMover. This is a circular tour of Tomorrowland and it was the WEDWay PeopleMover the last time we were here in 1993 ("WED" being the initials of Walter Elias Disney). 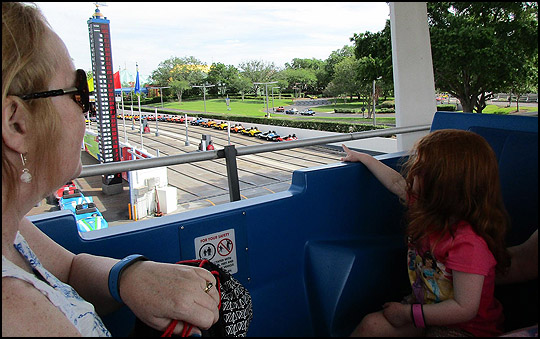 The ride was renamed the year after in 1994 to Tomorrowland Transit Authority and in 2005 the combined word PeopleMover was reinstated. The ride passes through some of the buildings and rides and therefore as the rides change, the narrative commentary has to be changed also. 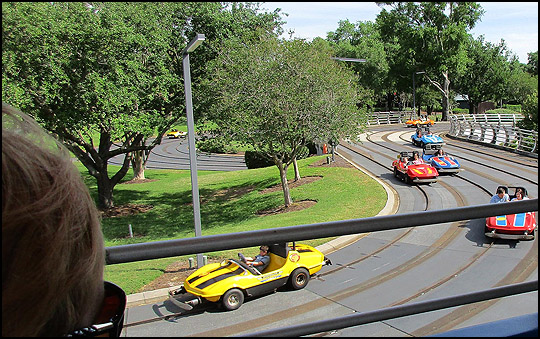 We pass over the cars of the Tomorrowland Speedway. It has given thousands of youngsters their first taste of being behind the wheel of a car, with the safety of a central rail for each track that keeps the cars from straying into each others' path. 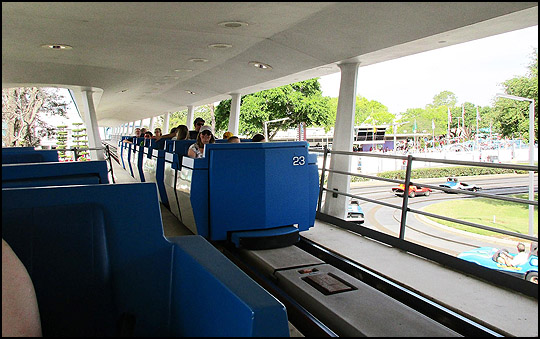 The unmanned trains of the PeopleMover are powered by Synchronous Linear Motors set at intervals into the centre of the track. The trains are pulled along by the magnetic field generated by the motors. 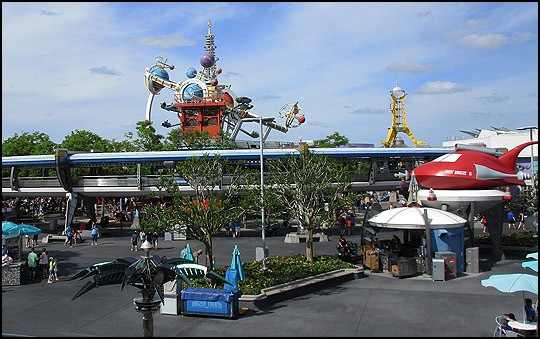 The single station is situated underneath the rocket ride, The Astro Orbiter, behind the red tower seen here. You ascend to and descend from the platform on a moving walkway conveyor belt that feels a little rocky at times as the belt passes over rollers underneath. At the top, the circular platform revolves at the same speed as the trains, which slow, but do not stop. Once you are on the rotating platform it is as though the trains are stationary and you have plenty of time to get in and out. 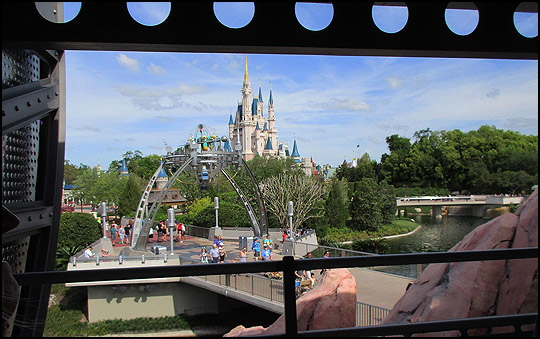 Looking towards the centre of the park with Cinderella's Castle. In the foreground people are passing under the sculpture that marks the beginning of Tomorrowland. This view also shows the extent of greenery and landscaping in the park. Just about every single line of sight has been designed especially to be pleasing to the eye. 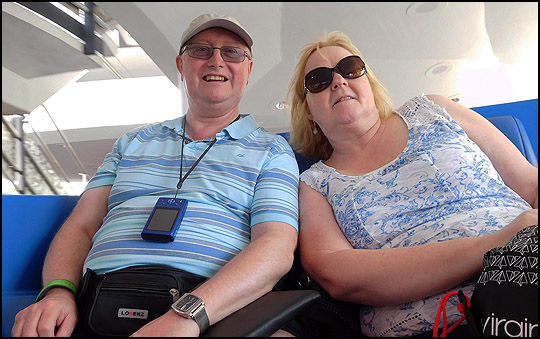 The ride takes just over ten minutes and here we approach the station once more and get ready to disembark. This is one of the rides less likely to have any waiting time and you can usually ride up the ramp and get straight onto a train. 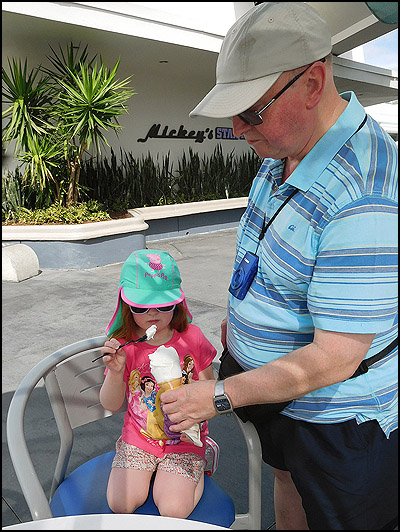 Grace wants an ice cream and it is somewhat USA-sized... This was taken after Grandad had had to intervene to stop the top from falling off, so is already reduced in size!