Tuesday 26 April 2016. Our third day at the Magic Kingdom. It is already very hot when we got there and we took a seat in as much shade as we could find as Gill and Eddie took Grace to meet Tinkerbell. 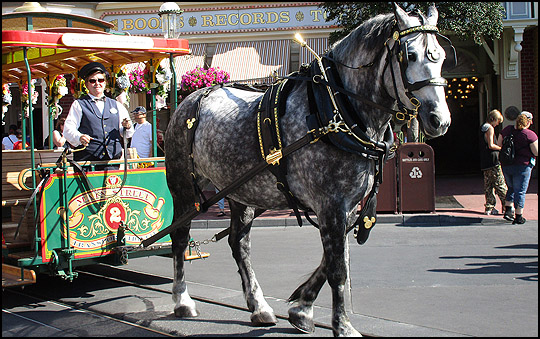 We watched the horse-drawn bus head in for a spot of the same, shade and a bucket of water. (We had made do with a bottle...) The bus came out a little later with a much-refreshed horse. 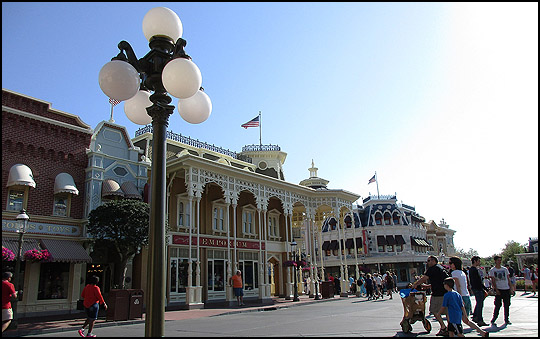 These buildings front onto the Times Square area. The Emporium is the start of Main Street U.S.A. and the front end of the long shop that extends all the way to Casey's Corner at the other end. 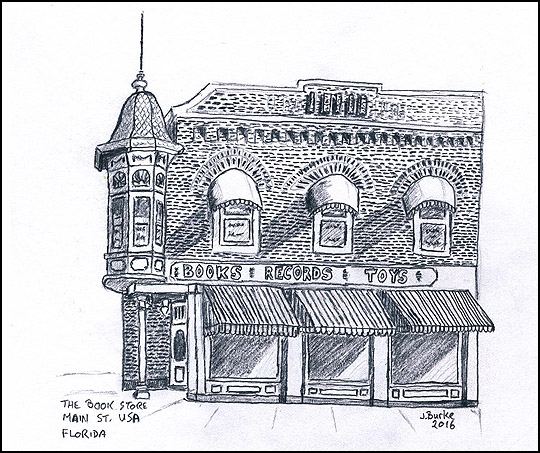 I had the sketch pad and was doodling away, getting the basic shapes and enough detail of the first store to carry on and finish the drawing at intervals during the day whenever we found time and a space to sit and draw breath. It's not perfect by a long way, but it does the trick. 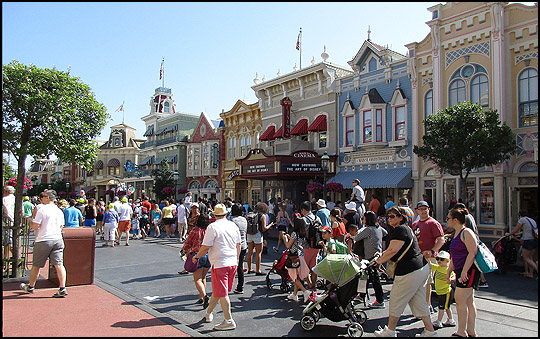 With the merchandise mainly on the left hand side as you go up Main Street U.S.A., the food shops are on the right. Special vents waft enticing smells at you as you walk past. Vanilla, the smell of baking, toffees... The other quite neat thing about the shops is that their windows are lower than they would have been in real life. Walt Disney knew that small children can't always see and he wanted to make sure that they could! 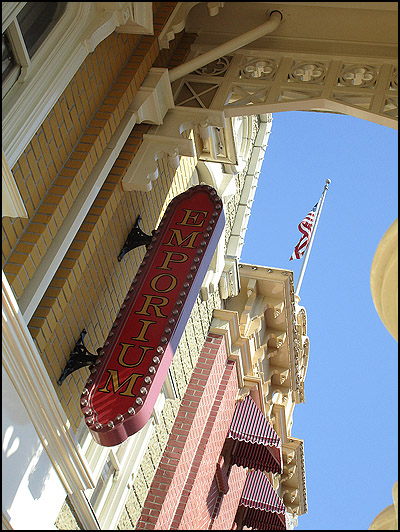 Everything is clean and kept in tip-top condition. I expect this is slightly easier here than in a wind-swept British seaside resort, but I'd also bet it does not stay this way without a fair bit of effort. 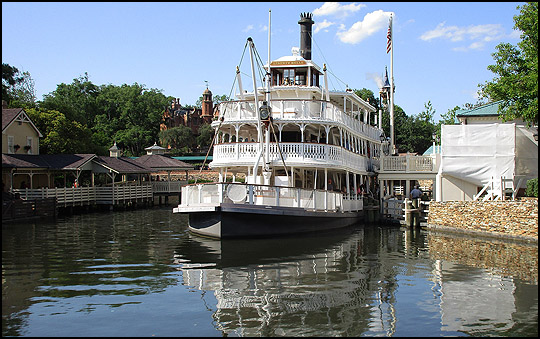 We head for the Liberty Square River Boat. The boat is named Liberty Belle and is a stern-wheeled paddle steamer. We thought we would watch it depart and then catch the next one. 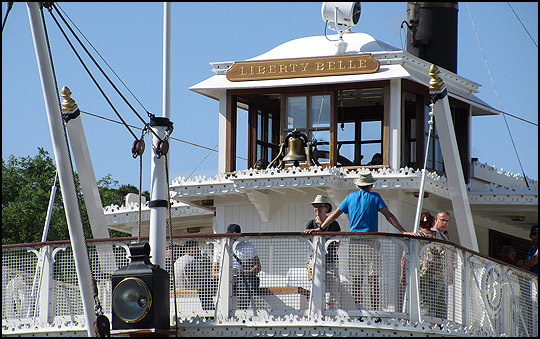 She has three decks and apparently if you go up to the wheelhouse and ask, you can hold the wheel and you get a certificate to say you have driven her. But I didn't know that at the time... 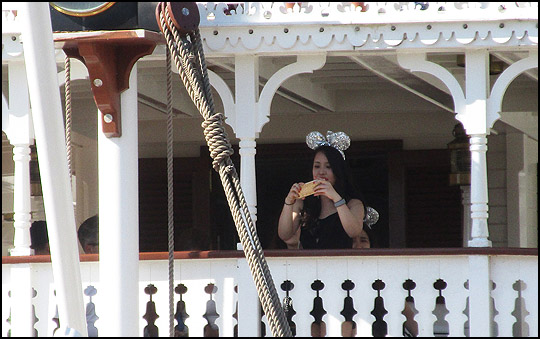 I caught a glimpse of someone pointing a camera my way - well, not necessarily at me personally... It's amazing how many people - and not just kids - wear Mickey or Minnie ears. It's obviously their equivalent of the "Kiss-Me-Quick" cowboy hats that everyone at the UK seaside used to wear in the 1950s and 60s. Apart from people on a stag and hen do, even that tradition seems to have faded away now in Blackpool and other resorts. 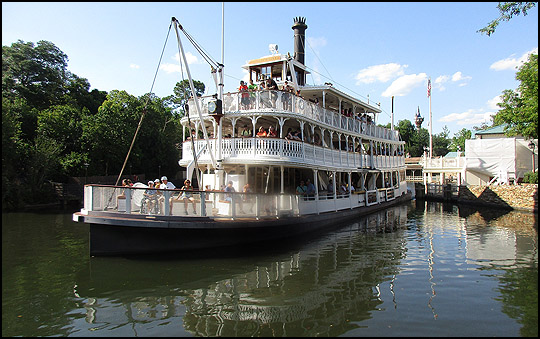 And I must confess at this point to a minor disaster. Rather than carry my DSLR around, before we set off for America I bought a tiny compact camera thinking it would go in my pocket and be less bother. All fine so far. However when turned off it automatically put a shutter over the lens. Again all fine - but... it meant I didn't notice that I, or something, had inadvertently touched the lens, leaving a smear of grease at this point. Some of the following photos are ok, where I can disguise it with contrast and brightness, but it is noticeable on others as a fuzzy area and it will be two days of the holiday before I did see it and clean the lens. Duh...Should have taken the Canon... 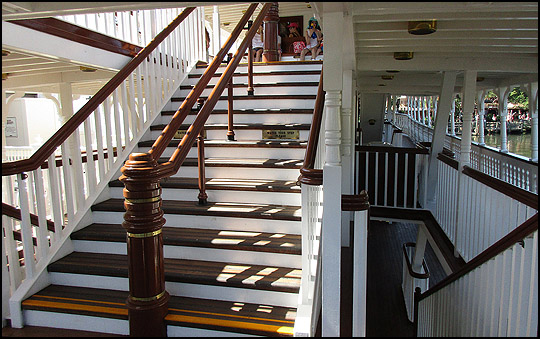 We wait until the boat comes back round towards the entrance building and then make our way through and onto the gangway. We opt to stay on the middle deck near the huge paddle wheel at the rear. 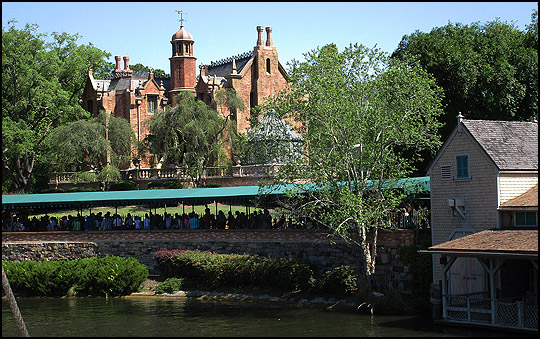 Towards the rear is the Haunted House. Towards the front is the queue! This is probably one of the busier attractions and it always had a fair queue. Use a fast-pass for this one! 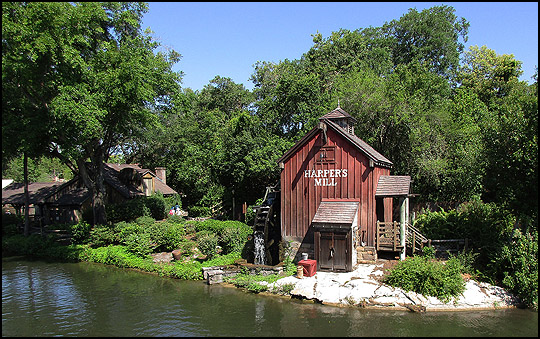 Harper's Mill complete with water wheel, on Tom Sawyer Island. This was a walk-round attraction with scenes inspired by the books, The Adventures of Tom Sawyer and Adventures of Huckleberry Finn. 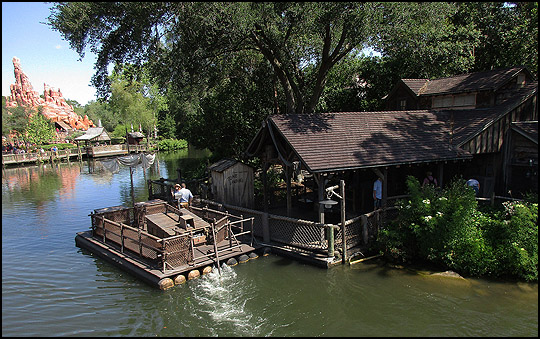 It really is an island. You reach it from Frontierland by raft. I'm afraid I haven't read any of Mark Twain's books. I'm not really sure how I escaped that during school, but I might go back now and read one to find out why Tom's raft churns up the water at the back... 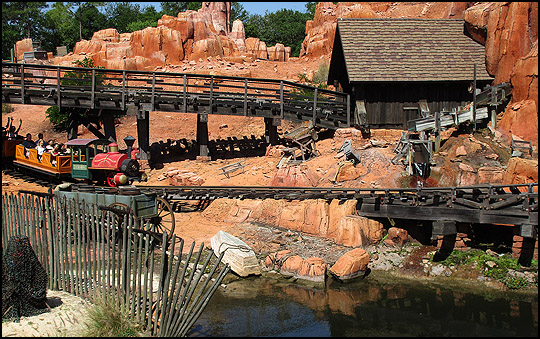 We pass by the roller coaster, Big Thunder Mountain Railroad with its runaway train. The ride was opened at Magic Kingdom in 1980 and there are slightly different versions in California, Paris and Tokyo Disneylands. 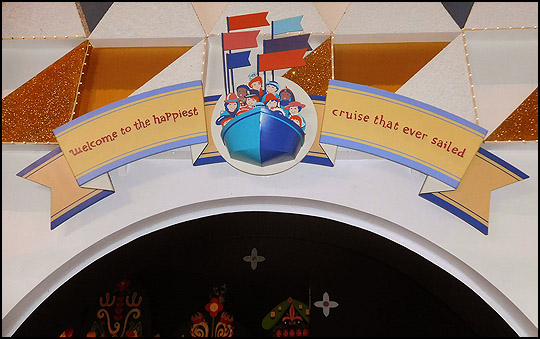 We meet up with the EGGs and queue for the "Happiest Cruise That Ever Sailed". It's a long queue and very hot. 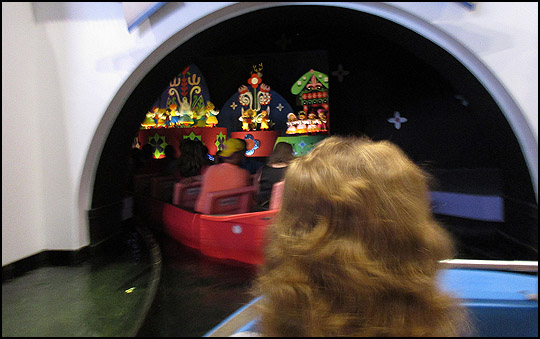 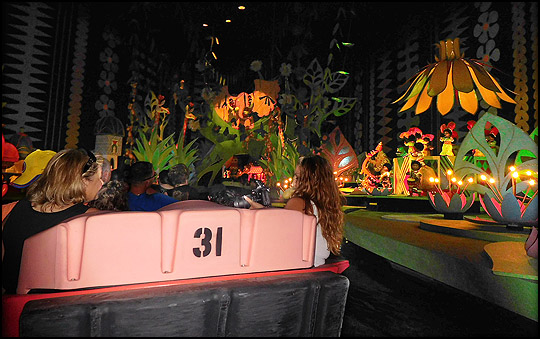 It's a small small world and we think you'll find
By the time you leave, you'll have lost your mind.
It's a song, it's not rain, but it seeps through your brain,
It's a small, small world... 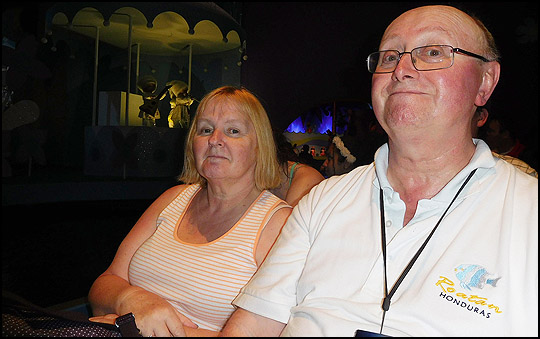 Already showing signs of confused acceptance... By the time we come out - the ride lasts 20 minutes(!) and it's still the same song as you come to the end - I need a lie down somewhere quiet and dark, whilst my brain replays the song another ten or twenty times...