Disney Dinosaurs and Disasters of The Ice Cream Kind...

Thursday 28 April 2016. This will be a dual-park day again for us, though with the bulk of photos coming from the Magic Kingdom. First we must go back in time... 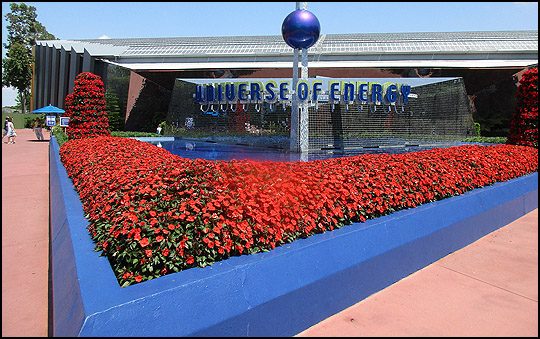 We start the day at EPCOT in the science-oriented bits. The Universe of Energy has a show starring actress Ellen DeGeneres and Bill Nye, The Science Guy (?) looking at how fossilised fuels came about. This starts off as a film show, but then the rows of seats we are sitting in turn round like a train on a turntable and then move off into another huge hall with a literally breathtaking scene, glimpsed through the opening doors... 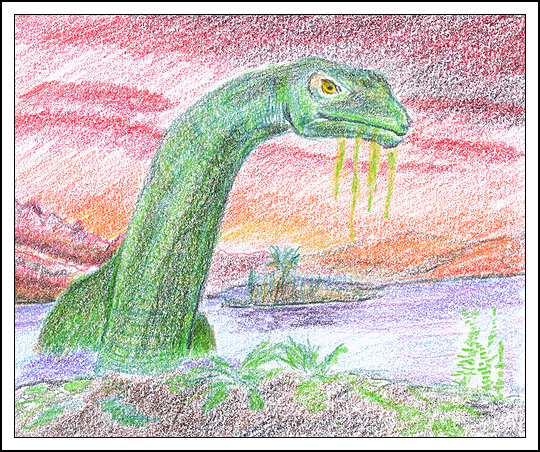 I didn't take any photos on the ride, but this is my sketch of the sight that awaited us with a whole herd of these gruntodons, one of which greeted us with a sneeze, spraying us with a mist of water! They were very lifelike with Audio-Animatronic movement. There were many more dinosaurs waiting to eat us or each other as our... er... cinema seats (!) moved through several scenes. 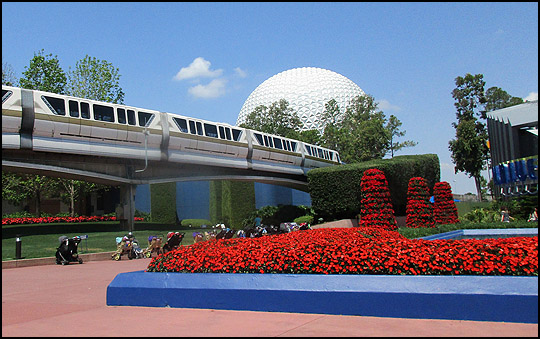 We decided to park hop on the Monorail from EPCOT to the Magic Kingdom. I still love the look of the Disney Monorail which goes all the way back to 1964. I remember how excited I was when I heard that Blackpool was to get a monorail in the Pleasure Beach in 1966 and then it looked as though they had made it out of origami folded cardboard... A bit like making a space ship that looked like a horse-drawn stagecoach... 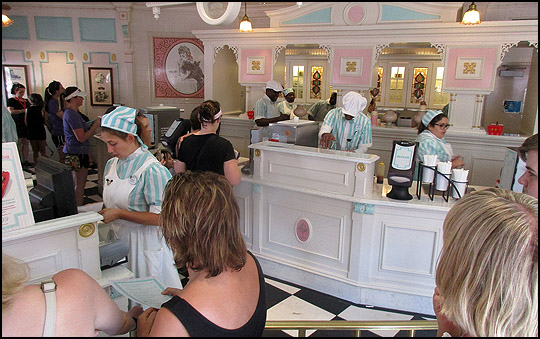 By the time we got to the Magic Kingdom we were hot and thirsty and we decided on ice cream floats from a shop on Main Street U.S.A. 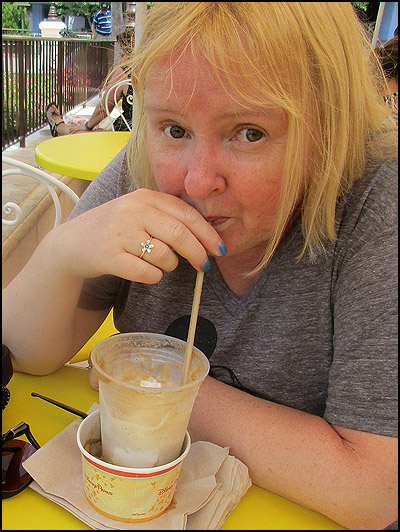 "You'll need to start drinking these straight away!" warned the man at the counter, handing over two large frothing drinks that threatened to explode lava-like over the edge. I took a big swig and Phew! mine was safe.

Miss Franny however was adamant she wanted to go outside before drinking and it erupted all over the cup, the ice cream carton that the man hastily thrust at her, her hand, several napkins that I grabbed, and half the floor before I could persuade her to take a gulp. We mopped up as best we could and left, safe in the knowledge that we couldn't be chased because everyone left in the shop was stuck to the floor... 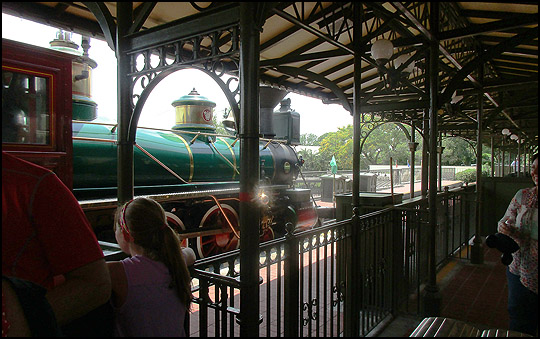 I had been disappointed on our first visit here, this trip, to see that the Walt Disney World Railway was closed for refurbishment. But today - yahoo! - it was open. We got on at Town Square and did a full circuit of the park. There's not really a chance to take a good photo of the locomotive at the station as it pulls too far forward. It is, after all, the carriages which need to stop at the platform! I took this from behind the barrier as it steamed into the station. 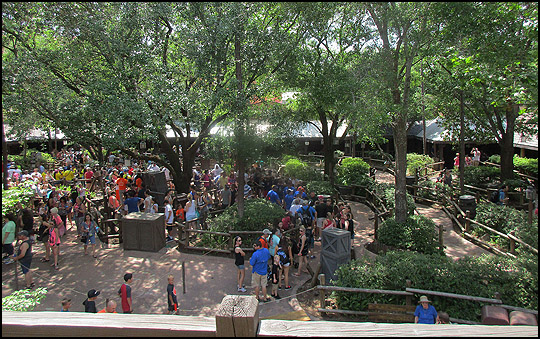 The train stops in both Frontierland and Fantasyland. This is the view from the Frontierland station which overlooks the queueing area for Splash Mountain. 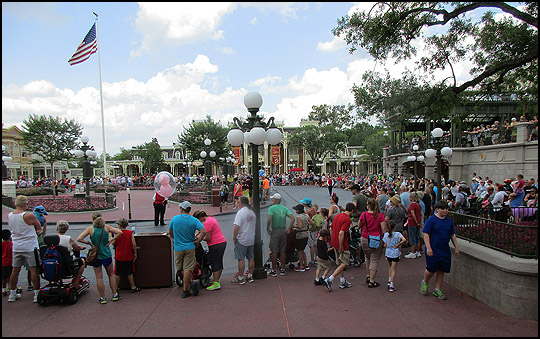 When we came back to Town Square and left the station, we found crowds had gathered for the daily Festival of Fantasy Parade. Oh what the heck! Let's watch again and just concentrate on faces. 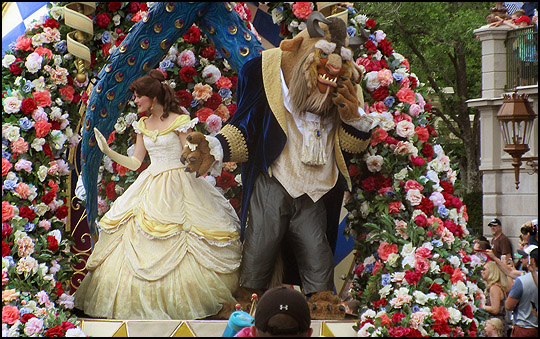 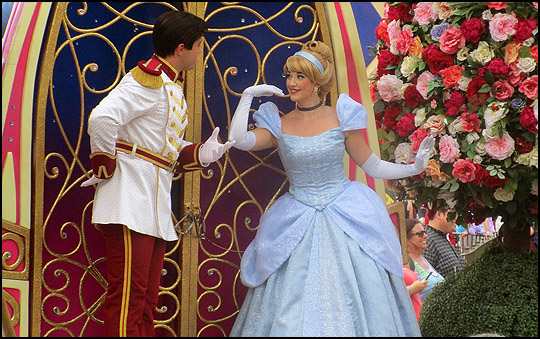 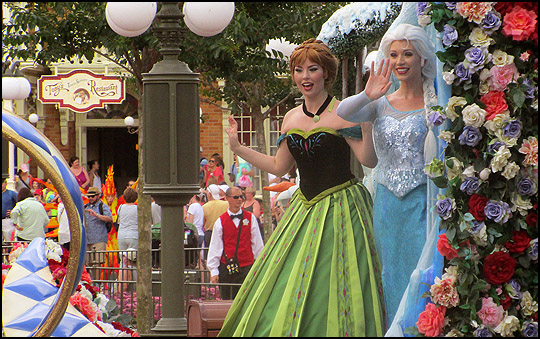 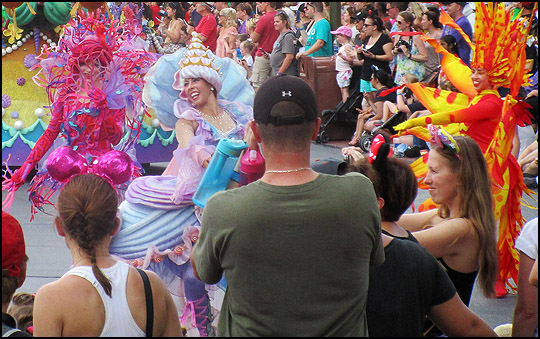 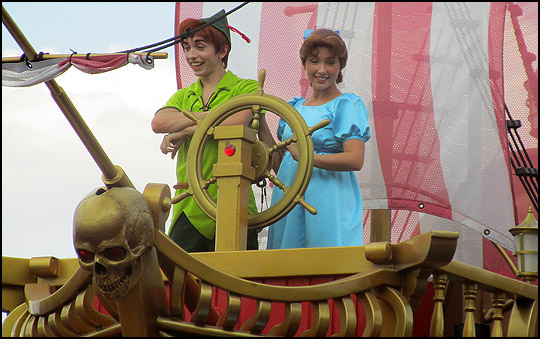 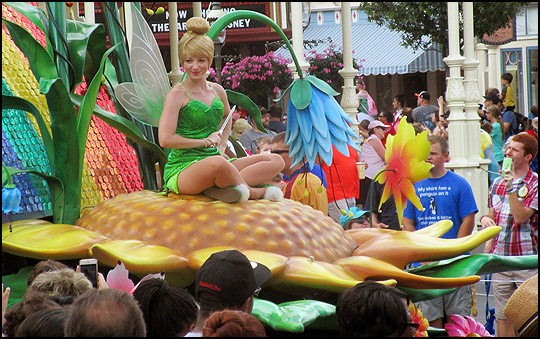 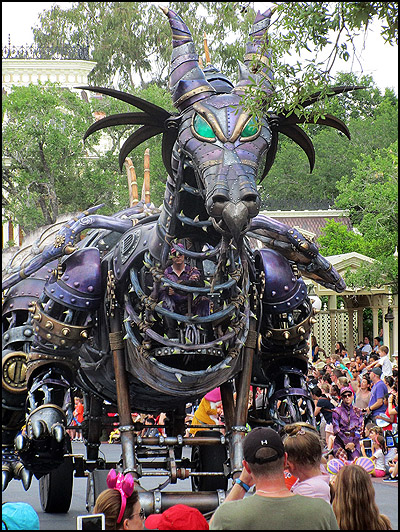 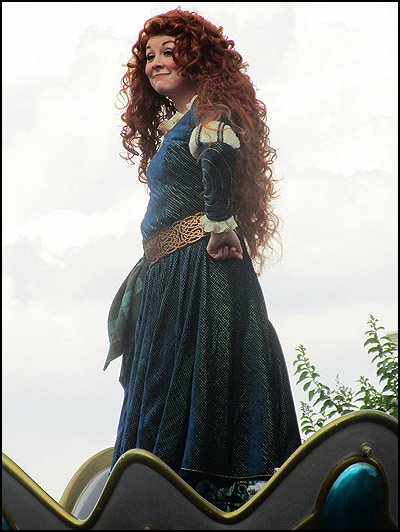 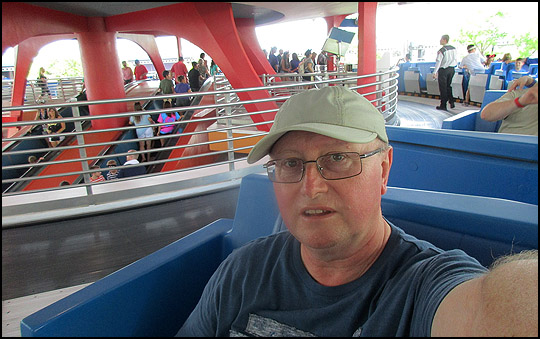 We head into Tomorrowland for another trip on the People Mover. In the background you can see the stepless moving pavements that go up and down between ground and platform levels.

We met up with the family to eat at Casey's Corner. Well, the EGGs ate there. One look at the enormous hot dogs smothered in sauce was enough to convince us to look elsewhere but we all sat at the same table outside! By the time we made our way back down to the lagoon and the rows of bus stops, it was going dark and we could see but not hear flashes of lightning on the horizon. 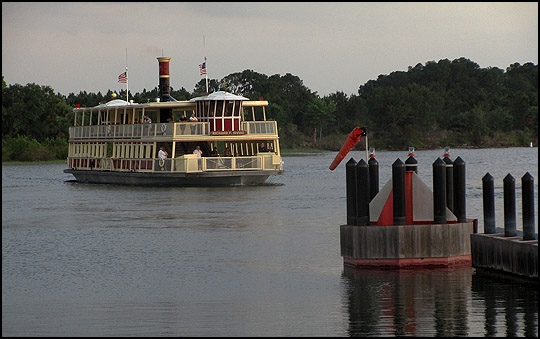 This is one of the ferries that crosses between the Magic Kingdom and the nearest car parks. A fleet of land-trains (Disney call them "trams") run between the theme park and the car parks also. The car parks stretch for miles! Pay particular care as to which car park you leave your car in - it could take ages to find again if you forget! 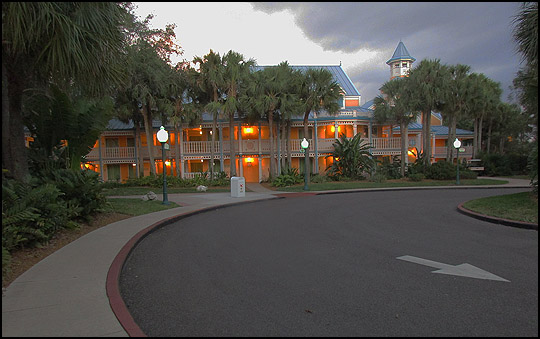 Back at Caribbean Beach Resort. The sky is dark and cloudy and we can still see lightning. We don't hear any thunder or get any rain though. 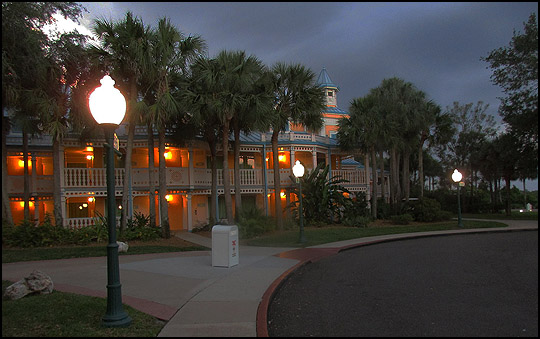