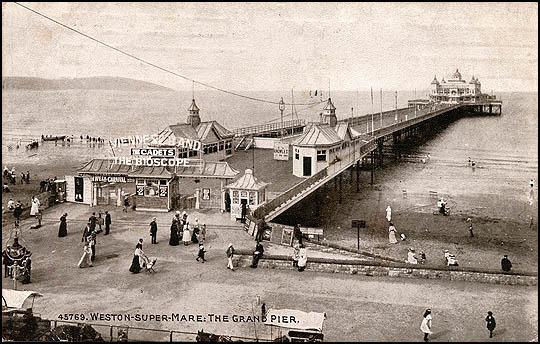 The photo shows Weston's Grand Pier. The pier, which charges 2d admission (just less than one of our pence today), has few of today's shops and kiosks at the entrance. Just turnstiles at either side of the central ticket booth.

Signs boast of a Viennese Band - they would no doubt play waltzes for dancing. Another sign advertises The Bioscope - silent movies. In 1917 they could have been showing the glamorous Theda Bara in an early version of Cleopatra, possibly with the new Charlie Chaplin movie Easy Street in which his policeman character has to get the better of a huge villain. Or perhaps they saw Fatty Arbuckle in Coney Island? The name "Cadets" is displayed also. That could be the name of the Viennese Band, the cinema or something totally different.

There are not very many people on the pier itself, the only one I'm sure of stands against the side about a third of the way down. A few people are on the beach (it looks as though the tide is not only just on the turn, but that it has come quite a bit further up the beach than it does these days!) To the left of the pier a line has formed on the beach, waiting to go for a boat ride. Right at the bottom of the photo two covered horse-drawn carriages wait for passengers. 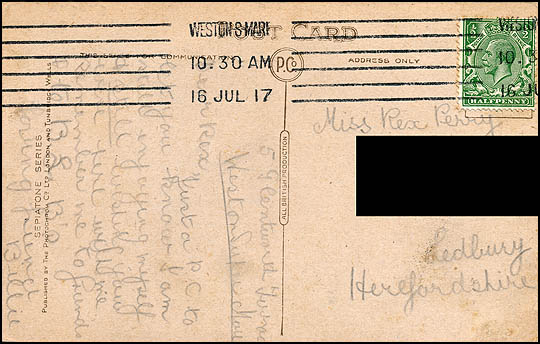 The postcard was sent to a Miss "Rex" Perry, in Ledbury, Herefordshire. It reads:

Dear Rex, Just a P.C. to let you know I am still enjoying myself and still wishing you were here with me. Remember me to friends and to B and B's loving friend, Billie.

So was the sender "Billie"? Or was Billie the loving friend of the hard to identify "B." Ooh! Messages open to interpretation in the midst of war! Who was the mysterious Miss Rex? And after posting the card, did the sender swim back out to their U-Boat...???