A Brief Stop In Boscastle

Saturday 12 September 2015. We have just returned from a week in Cornwall. We based ourselves in Newquay but, on the way down, decided to call in at Boscastle. By the time we were getting there the thought of an hour out of the car was quite attractive! 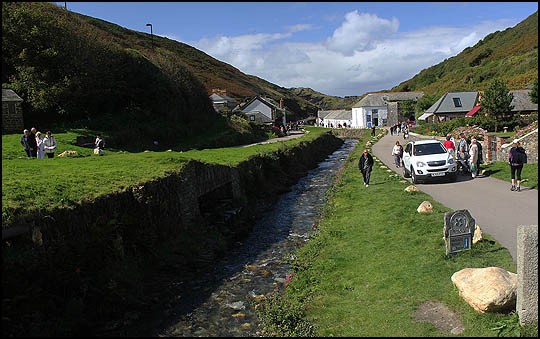 This was our first visit to Boscastle since the horrendous 2004 floods which made all the TV news at the time, with footage of cars and vans washed away by the torrent flowing down from the hills. 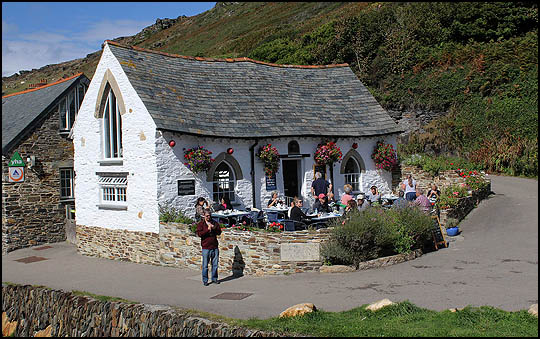 The Pixie Cottage was totally flattened by the floods but has been rebuilt to a fairly close copy. It used to be a gift shop but is now a cafe. 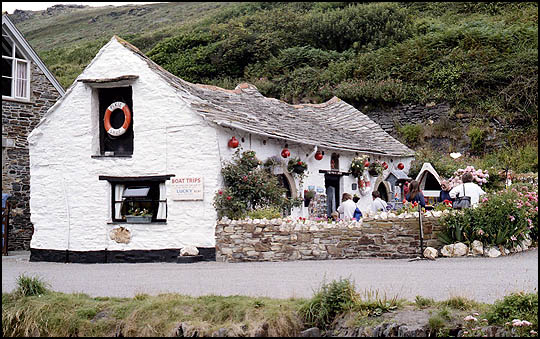 I took this photograph in 1991 and you can see how a few things have changed - windows and the roofline - originally the beams had just sagged with age. It looks like the builders of this replica didn't dare introduce so pronounced a curve! 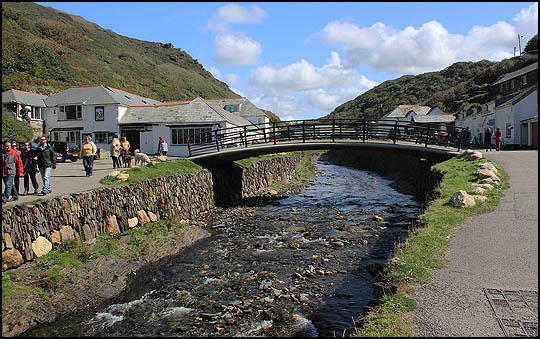 The torrent of water and the weight of all the vehicles it was carrying with it smashed the ancient bridge to rubble and this has been replaced with a more streamlined affair that would present less of a barrier to any flood - well the water bit anyway. The vehicles might still mangle it a little... 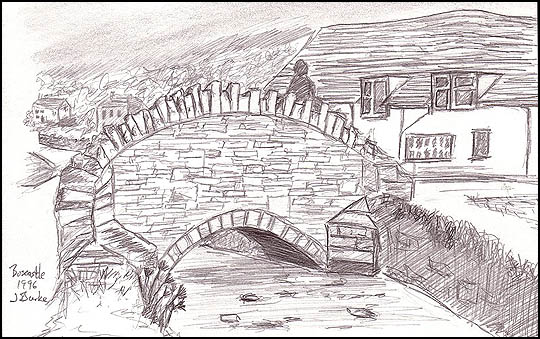 This is the bridge that was washed away, drawn during a later visit in 1996. Hundreds of years old, no reproduction could have done it justice. 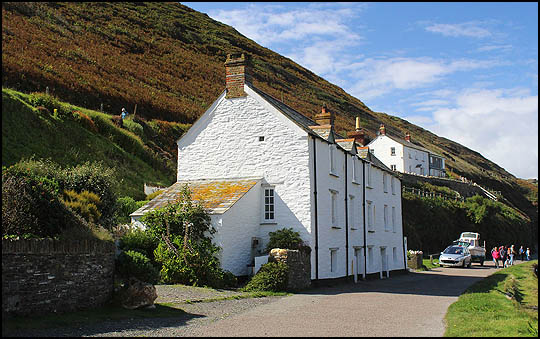 We wandered down to the harbour. This took us down alongside the river which on this day was gurgling happily and placidly over the pebbles of its bed. 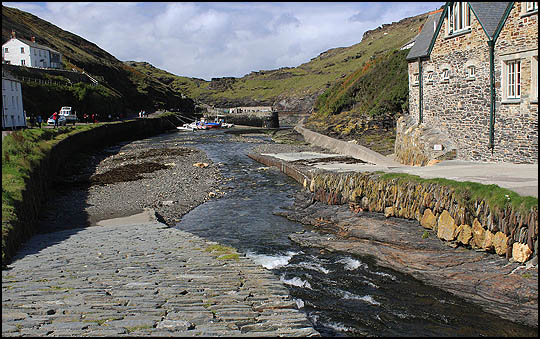 It flows into the harbour itself which at low tide only allows access in and out to very low draft boats. 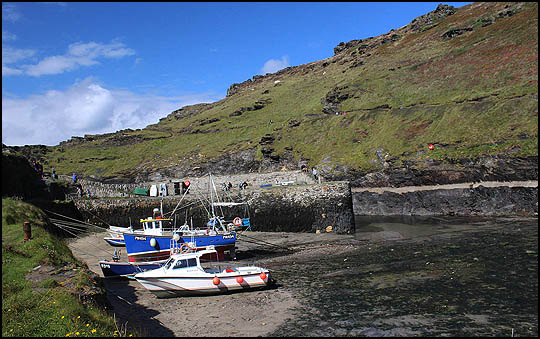 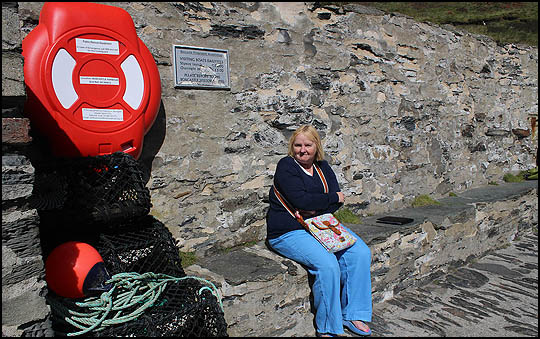 We were still on our way to our destination at this point so I hadn't taken the sketch pad out of the car. But we did sit for a while on the harbour wall, admiring the view back up the valley to Boscastle and beyond and letting the pain drain out of our feet... 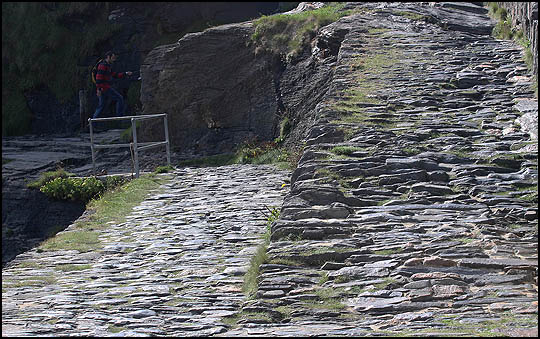 We both had thin-soled shoes on and the surface of the harbour wall, once cobbled as a flat surface, has weathered and worn depending on the hardness of the individual stones. It now presents your feet with a path of stones at quite different heights and exposed edges! The bit of railing dissuades people (I suspect it was originally aimed at children) from jumping across the corner of the harbour wall and edge to cut the corner. The drop at this point is sufficient to break bones at the very least with a considerable risk of death! "It were just a lark...!" makes for a really stupid last words quote...

We were gagging for a drink. Leaving the pleasant views of the harbour and the shelter of the harbour wall, which enhanced the warmth of the sun on our faces, we paid a visit to the National Trust shop and cafe. A large group of Italian teenagers were umming and ahhing (in Italian) and just seemed to be milling about aimlessly.

"Who's in the queue and who's not?" I tried, but they ignored me completely and I suspect their schooling and mastery of the English language probably hadn't included that particular phrase. Even the chap behind the counter looked a little exasperated at the group standing in front of him but not asking for anything and he turned towards me and asked what I wanted. 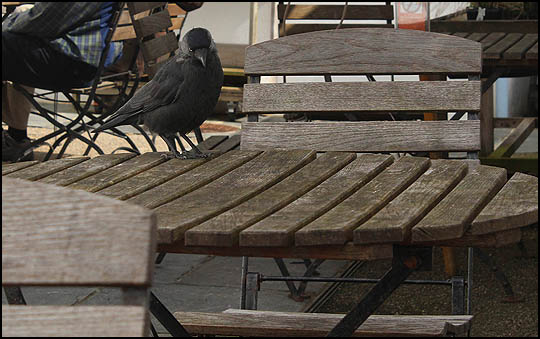 I took our drinks out into the small garden at the rear of the building and we were joined by a slightly wary member of the crow family whose expectations of crumbs our teas totally failed to fulfil.

A member of staff came out loaded with plates for a nearby table and, on turning back, whacked her head on the large sun umbrella of the table behind her. "I've been here five weeks now and I do that every time...!" she said, shaking her head.

To come: Perranporth, Penzance, Polperro, Plymouth - maybe even some places which don't begin with a "P"... I do several sketches, we go on a steam train, we eat where smugglers ate, I blunder into the middle of a drug deal, I drive down a road where the hedges brush both sides of the car at once, the biggest sandwich in the world... All this and more over the next few entries!