I took Miss Franny to Morecambe for the day today. We had a coffee at the next table to two ladies who I would guess at being in their late seventies or possibly early eighties and who had just been served with huge Knickerbocker Glories (ice cream, jelly and fruit to the uninitiated).

"Can I be cheeky and ask you a question?" asked one.
"Go on then!" I grinned.
"Do you know anything about taking photographs?"
"I have been known to take one or two..." I admitted.

She rummaged in her handbag for what I presumed would be a camera. But no, out came a Samsung Galaxy phone - these were old ladies of a certain calibre... It did have to be switched on from scratch - she wasn't going to have her day interrupted with nuisance calls, after all...
"Ooh, don't they take a long time to warm up...?" she shrugged.

I dragged a chair round to take them from the correct height and delivered the phone back with what I thought was a nicely framed picture of the two ladies grinning at me - long spoons held in eager fists and with tall ice cream and jelly and fruit concoctions topped with whipped cream and a couple of wafer biscuits each.
"Oh that's lovely, dear, thanks!"

She turned the phone off carefully and put it back into her bag and as we sipped our cups of coffee the two old ladies demolished the ice creams before them.
"We won't want any dinner after this..." the second one commented.
"Nonsense, dear, it's only eleven o'clock - we'll be alright having fish and chips for dinner!"

We finished our coffee and wandered round the streets of the town for a while - there's a couple of good antique - sorry: Retro shops there. One had a 1960s radiogram playing records in the shop and I was so tempted to ask the price... 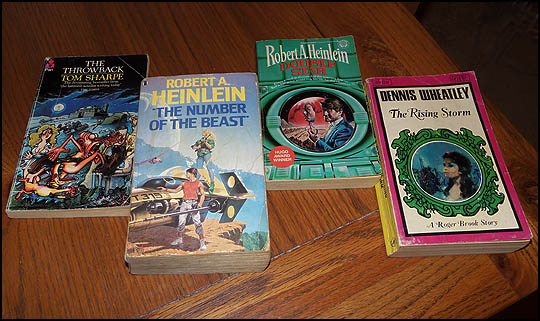 Then we ended up in the huge second-hand book store that I had found on our last visit and we found the owner pulling his outdoor display under the cover of the shop's awning as dark clouds gathered in the sky.

"Have you been before? Ah - well I've just taken some more stock packed in around 30 banana boxes, so not all of the passages can be accessed I'm afraid..."

It didn't matter. I found four books to buy without any problem at all. Fran came back with a bunch of Fyffes and I have the first pressed tarantula of a new collection...

We had dinner in another cafe where a slightly bizarre conversation could be overheard from the table behind me.
"I don't think much of our coach driver..." complained the rather large mother of a family from middle Lancashire, "He's a great fat thing!"

Now forgive me if I'm being picky, but is that a reason to dislike a driver? I could dislike a driver for swerving all over the road for no apparent reason, but for being on the large side??? And this from someone who was recognisable from countless Bamforth seaside postcards herself...