Sunday 13 September 2015. We enjoyed a great breakfast at the Blue Haven B&B and then looked at the weather which was not very promising. It was supposed to be a very rainy day. Indeed Cornwall as a whole had a yellow warning for floods and bad weather. 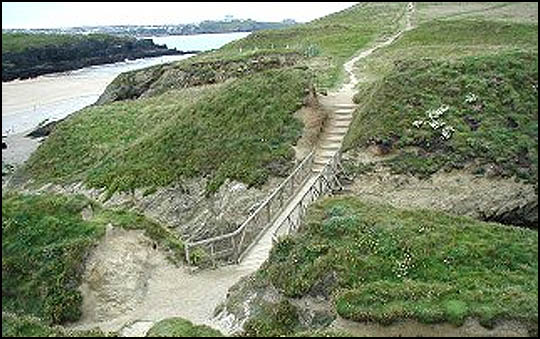 We decided to walk over to nearby Porth and onto Trevelgue Island. Usually this was a first night in Cornwall must for us. But after walking up the hill from Newquay we weren't keen to do the considerable climb down the cliffs and up onto the island and then back again.

It was very windy and there was a bit of drizzle in the air so I left the camera behind. The two photos here of Porth are from 2001, when my digital camera was a very early one and not up to delivering photos of anything more than 640x480 pixels. Even so, these weren't of great quality and at the time I shrank them to 320x240 in order to get a reasonable image quality. Bear in mind that 640x480 a year or two earlier had been pretty much the maximum screen resolution on computers.

We used to stay at the camp site at Porth and it is still there, but the large cafe is now a Tapas Bar and - yikes - the public toilets near the island have disappeared! 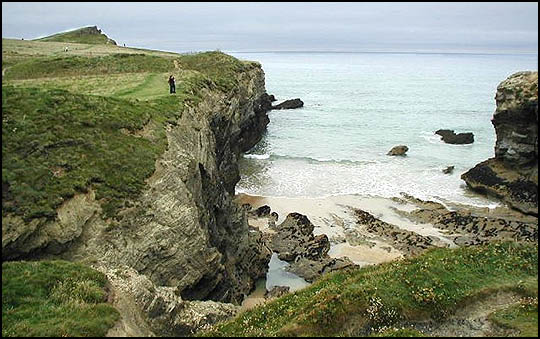 The island provides the location for much of chapter two in my book, King And King To Be. It was an Iron Age promontory fort and three massive earthwork walls still present a formidable barrier on either side of the bridge from the mainland to the island.

It is only a true island at high tide, but the cliffs are treacherous and not easily climbed. The island was not quite the same shape as the last time I saw it either... The sea has carved a few chunks out of the cliffs since 2001 and at one point the path has had to be re-routed to save people from walking over the edge! Having crossed the bridge and soaked up a bit of the atmosphere of those wonderful earthworks we returned, walking over the beach and up the cliffs on the other side back to the B&B where we retrieved the camera and set off for Perranporth. 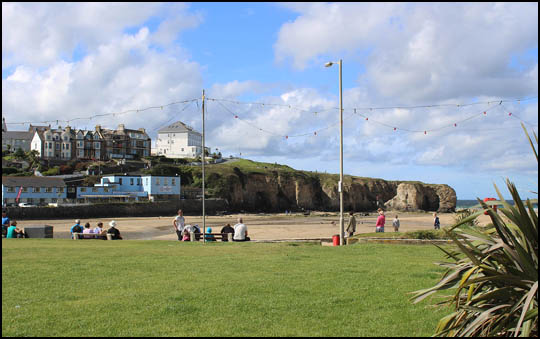 At Perranporth it had brightened up considerably, but a stiff breeze kept the temperature down. Even I was wearing a rain jacket over the top of my fleece and I still wasn't over warm! We parked in the car park on the very edge of the beach and went for a morning coffee. Then a walk up the shopping street and then whilst Miss Franny had a more leisurely stroll involving actual entry to some of the shops, I opted to go and see if I could sketch the dramatic rocks against the southern side of the beach. 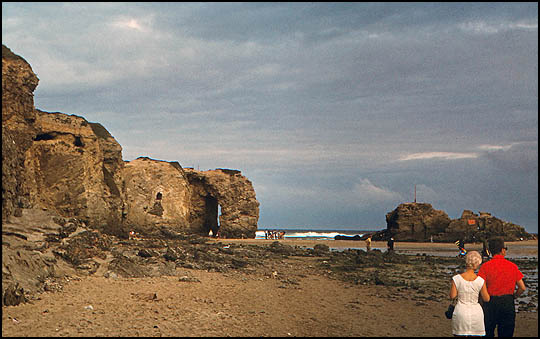 This shot was taken in 1970 on our first visit to Cornwall. That's my Mum and Dad on the beach looking at the towering rocks with the arches cut through by the sea. I wasn't sure whether after so long they would still exist or whether the sea would have caused the arches to fall. But they were still there. Some of the holes in the rock face are adits - entrances to tin mines.

A short distance away at Penhale Sands in the 19th century the ancient and long-lost oratory of one of Cornwall's patron saints, St Piran was found buried under the sands. "One of" because both St Michael and St Petroc have claims at the patron saint franchise, though it is Piran's flag - a white cross on a black background - that is today's Flag of Cornwall. He lived during the 4th and 5th centuries and amongst the legends attributed to him are that the Irish tied him to a mill stone and rolled him over a cliff into a stormy sea that immediately became calm and bore him to Cornwall. Also that his first disciples were a fox, a badger and a bear. All in all, he was lucky they didn't decide he was a witch... 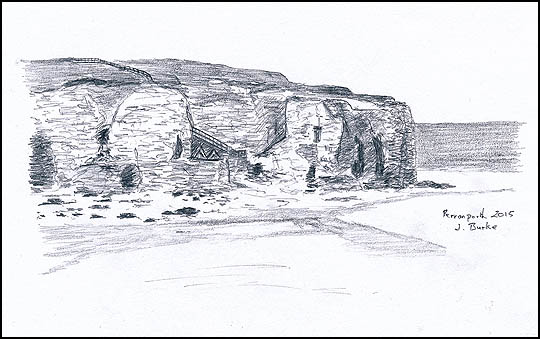 I sat on a bench on the opposite side of the beach and produced this over the duration of about an hour. I was just finishing when Fran came back, having enjoyed her shopping much better without a bored husband tagging along. We walked round to the short Promenade at the rear of the beach and sat on a bench, watching the antics of dogs and children and feeling thankful that we weren't the couple on the next bench who were being regaled with the most boring and banal conversation of two men with pronounced Birmingham accents. There was no getting rid of them and eventually the couple grabbed their things and said polite things like "Well we really must be going...". Rather than risk being their replacements, we quickly got up ourselves and headed for the nearest available cup of tea! 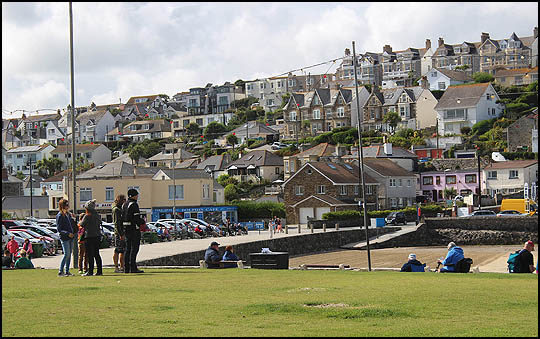 This was found in the Dolphin Cafe - the blue part of the cream coloured building towards the left of this photo. We shared a Cornish Cream Tea between us and ordered a separate cup of coffee for Fran. Cornish Cream Teas - two scones, strawberry jam and a huge blob of clotted cream. Yummy stuff! Certainly too much to have one each these days!

We stopped on the way back to Newquay at the Braefel Inn, a pub on the edge of the Perran Quay camping site. It was fairly quiet, but for a family enjoying a game of pool and we were drawn into their conversation and it was a fun hour before we went into the restaurant for our evening meal.

In the end, the weather was nowhere near as bad as the weather forecasters had been saying. We saw rain, some of it very heavy, but managed to be in the car for most of it. Tomorrow is supposed to be bad again though. We need to find somewhere that has some indoor shelter available!