Friday 12 June 2015. The third entry for this day - and there's another to come! The ruthless rejection of photos continues in this entry though as if I'm not on them, then I took them! 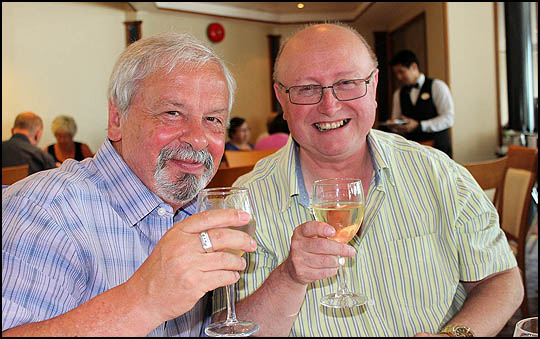 So we'll start with one taken by Miss Jeannie as the two disreputable rogues put on their most winning expressions for the camera. 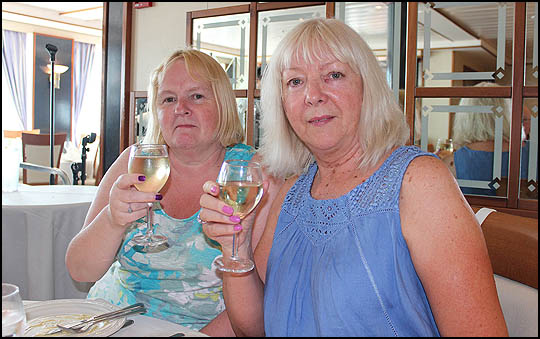 We have dinner in the Four Seasons restaurant, which is the smaller of the two main waiter-service restaurants. We are welcomed by waiters Yankee and Gede ("Jiddie") who we remembered from our last trip on the Thomson Majesty, last September. Our wine waiter is called Marwill and is kept busy... 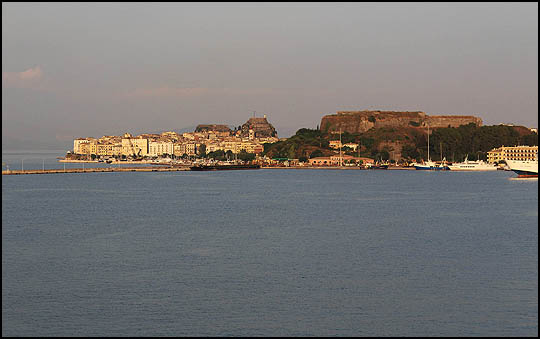 By the time we emerge onto the Promenade Deck the sun is sinking in the sky and it's promising a rather spectacular sunset. 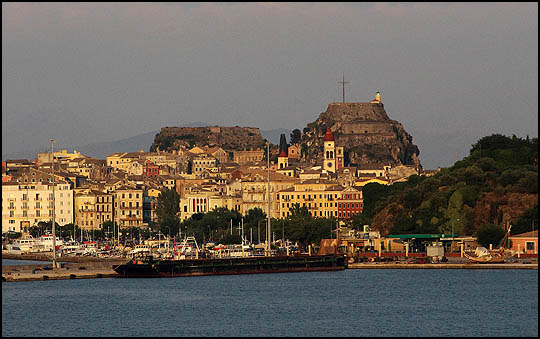 Corfu's old fortress. Built to protect the town from attack by sea, the Ottomans parked along the coast and came overland in 1537. The fort was ok but the town was destroyed. A second fortress, the "new" fortress, was built shortly afterwards with 20,000 houses being flattened to make room for it. 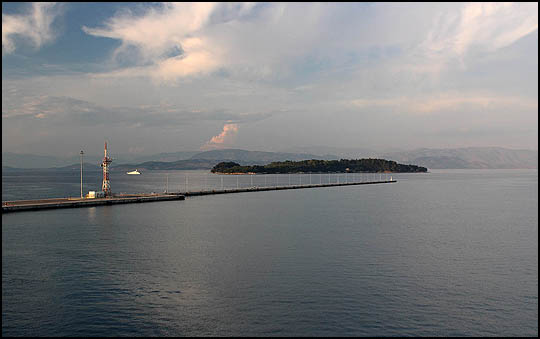 We wander round the Promenade Deck to take this one from the stern. We realise that the MSC Musica has slipped out of port as we were at dinner. Never even said goodbye... 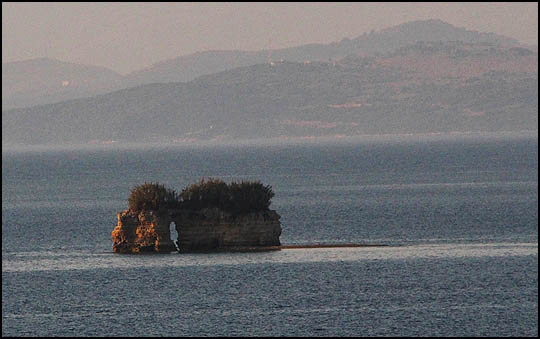 This tiny island with the archway through the rock stands alone in the water. 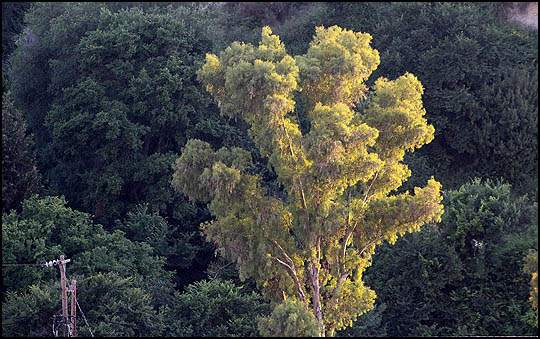 Arty-Farty picture time! A single tree catches the sun with the tree covered cliff face behind in shadow. Shame about the telegraph poles on the left, but I wasn't sure they'd let us chop them down... 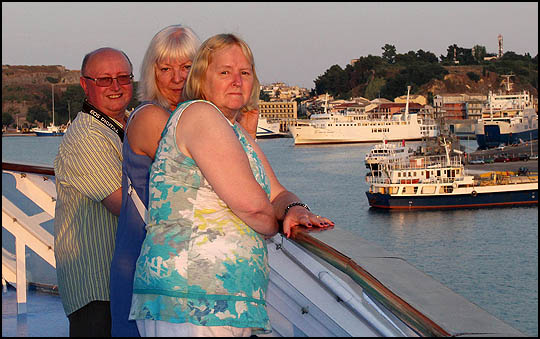 "Just turn round, guys!" comes a shout. We squint into the sun for several minutes... There were several other ships in port, both ferries and cargo ships. Some can be seen here. This is the hour most used by professional photographers as the colour of a low sun, either early morning or evening casts a warm yellow glow. 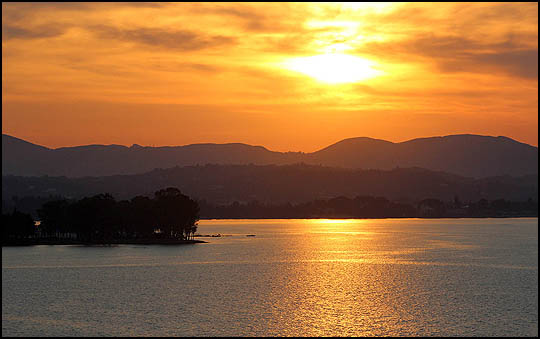 The sunset lights the sky with a fiery orange glow with the layers of receding hills getting progressively lighter in shade. 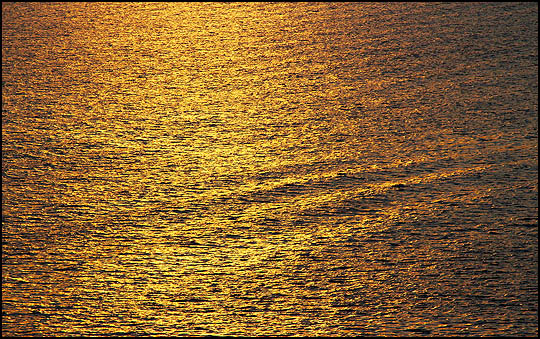 Looking towards the setting sun presents us with a view of a sea of molten gold. You could just dip a bucket and wait for the contents to harden! 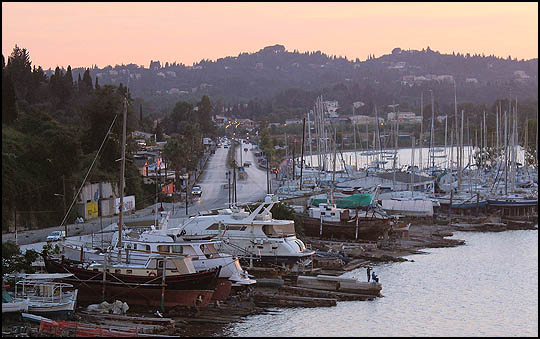 Walking a little further along the Promenade Deck gives us a view straight along the coast road. Towards the far end the street lamps have been switched on as the light level falls. 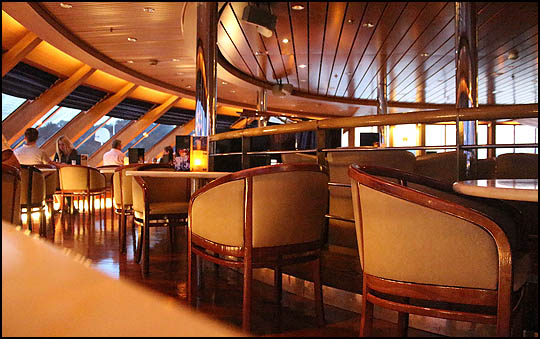 It's no good... I'm in danger of sobering up and am herded, crying lamentably in protest, into the Royal Observatory bar. 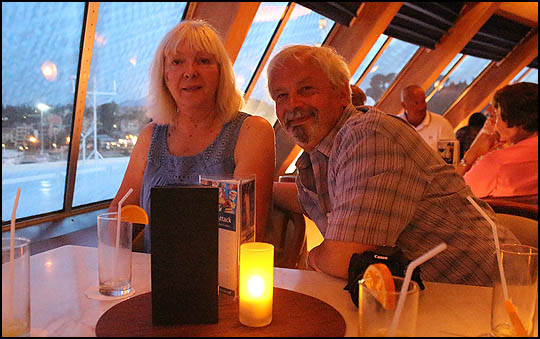 Ooh - hey up though! Straight glasses - we must have gone for orange juice all round! I'm sure they must have been followed by more cocktails of the day. David was already eyeing up the cocktail of tomorrow... 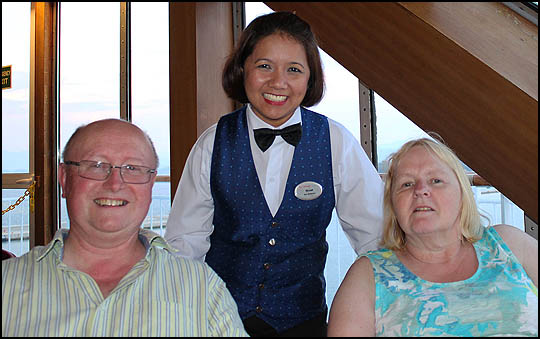 Ninet was the bar waitress in the Royal Observatory. "'Ninette' or 'Ninay'?" I asked. "Oh 'Ninette'!" came the answer, "I'm from the Philippines, not France!" I knew that already of course. I mean... she walked round me instead of just knocking me over!