On the Thomson Majesty

Last night David and Miss Jeannie came round and we shared photos and attempted to watch them all. But with a total of around 2,500 photographs we were struggling, as the clock ticked inexorably on, to either keep awake or blink after something like three and a half hours... Even our efforts in swigging two bottles of Chardonnay, one of Prosecco and half a bottle of Limoncello, remaining from our Italian holiday last year, was failing to keep us concentrating. Or contributing to the lack of it perhaps...

Anyway, with so many photos there could well be an entry on the blog for every hour of the cruise... Though here I've culled with ferocious determination and we'll cover a whole afternoon... 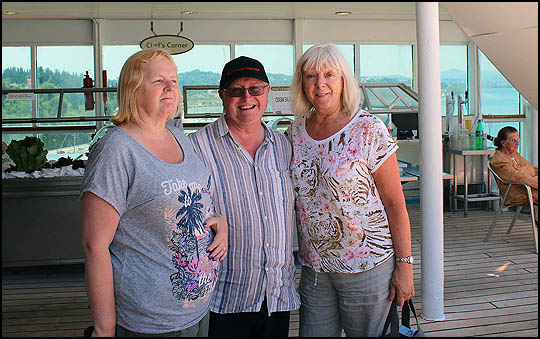 Here we are shortly after getting on board. This was held up as The Clicky Monster (David) had us dodging port traffic and then holding up proceedings for all other passengers as we hung over the side of the gangway as we were foolishly attempting to get on the ship. The inviting calls of the stewards and ship crew increasingly turned into "Quickly now..." as the crowds of folk wanting to get on or off built up, but these calls were easily diverted by the you-know-who with a casual "Just one more..." and then "Hold up your boarding cards..."

Here we have made it up to the open air deck on Deck 10, having been photographed on every stair landing and every floor. We are in need of some lunch. 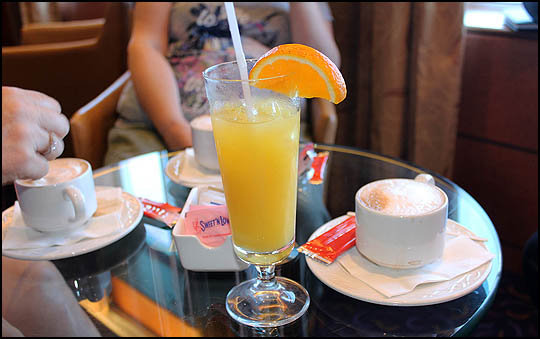 And having had lunch we have a coffee each - no, scrap that, three of us have a coffee and David spies the Cocktail of the Day - a Bon Voyage made with vodka, Galliano, apricot brandy, orange and pineapple juice. 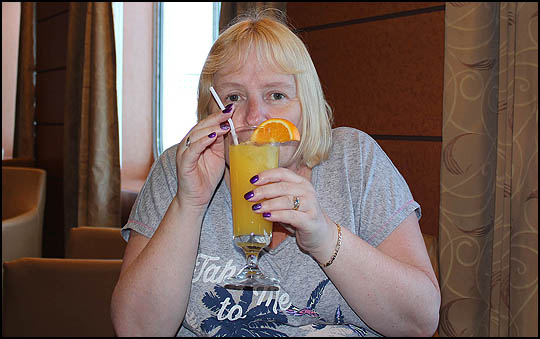 Before long we have finished the coffees and are sampling this strangely attractive drink for ourselves... 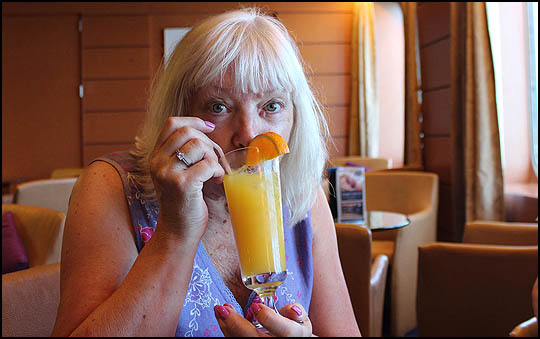 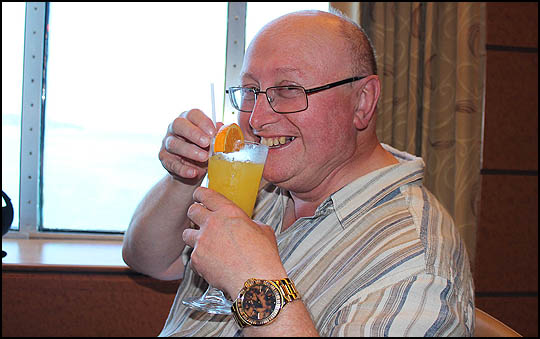 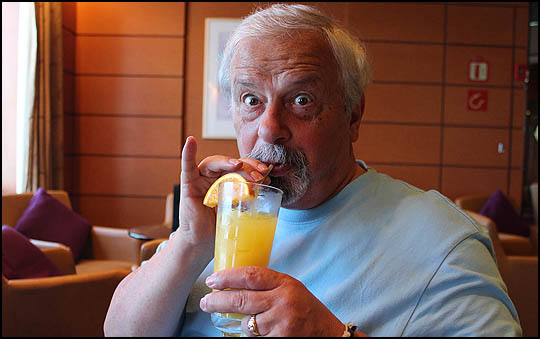 After a couple of these we go for a wander around the ship whilst the ship's photographers look on with awe and agree they will not make much out of our group during the week... I had left my camera in the cabin. Seemed a waste bringing it out really... 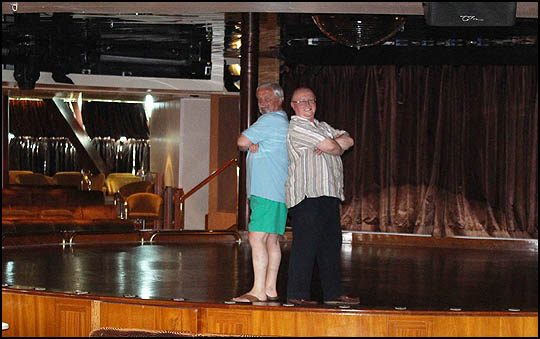 We tried out the stage for size, though this was the only time we were to trouble it on this cruise! 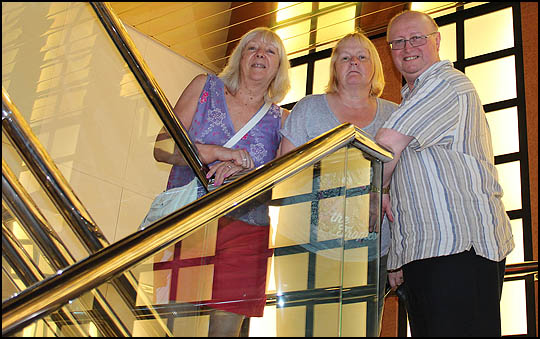 Continuing our wander. You thought I was kidding about the stair landings...? 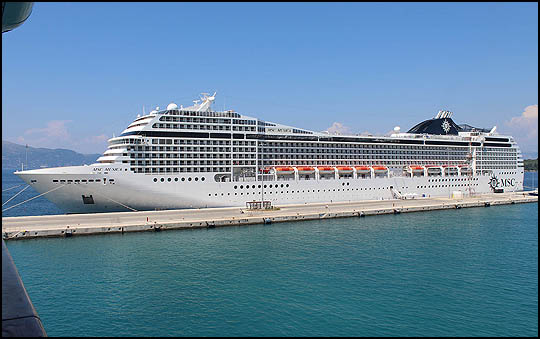 Up to Deck 7 which is the Promenade Deck. On this level you can walk a complete circuit of the ship. David insists (from the depths of his 9-years naval service) that it is the ship's waist, but I saw no evidence of bin bags (see what I did there?) and being able to walk round from pointy end to blunt bit and back four times to be able to say you had walked a mile just seemed unnecessary so we just did the half circuit and stopped at the roundy end (from the depths of my bathtimes with clockwork tugboat).

From here we could admire or otherwise the flat-sided MSC Musica. I like my boats to look like boats and you have to remember that a boat full of balconies probably has half of them in shadow at any one time! 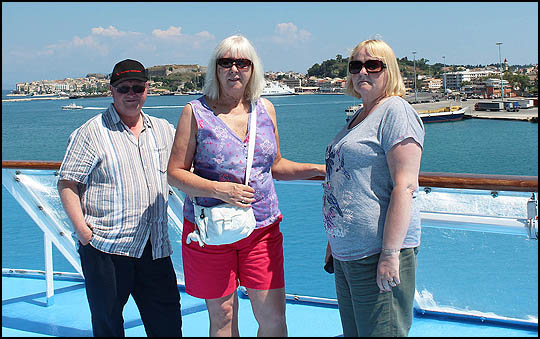 Round at the pointy end but standing pointing at the roundy end with a bit of Corfu visible behind us. 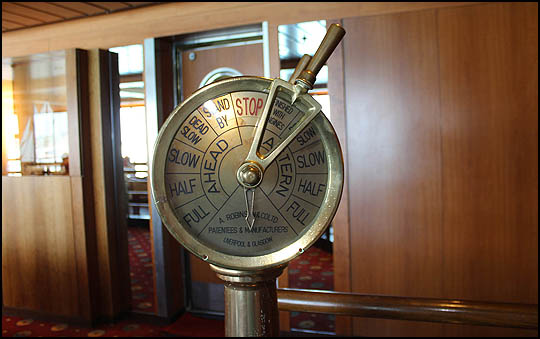 We explore the parts other tours cannot reach. The selection is labelled "Finished with engines". Quite right too... set the sails Mr Christian and a little less lip if you please! 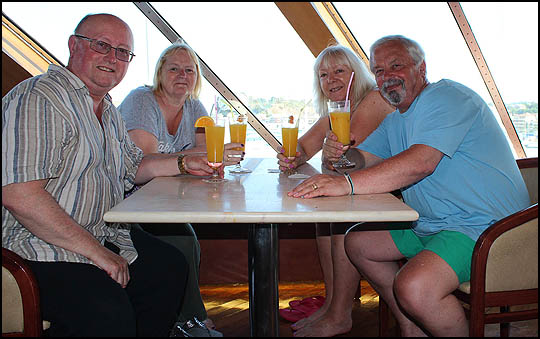 Oh no! How did that happen? We've wandered into a bar and four more Bon Voyage cocktails have sprung at us, demanding to be quaffed! 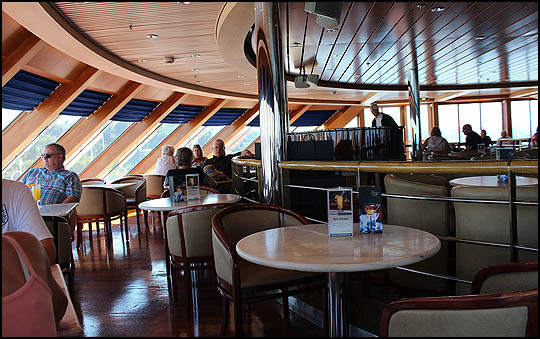 We are in the Royal Observatory bar at the front of Deck 9 which affords a Captain on the Bridge viewpoint over the sea. However as we are moored at the dock, this is not as exciting as a storm force seven!

Well that has dealt with the first afternoon quite nicely. We will finish our drinkies and then go to change for dinner. Dinner (more drinks...) and the early evening up to sunset will form the content for the next entry and at this rate of three or four entries for each day, we may just have finished with this cruise by the time we set sail again (not yet booked or looked for... We must be slipping up...)