A Morning Visit To The Vatican

Tuesday 2 September 2014. Thomson Majesty parks itself at Civitavecchia and we have a full day excursion to Rome. I'm going to split this into two articles. This, the first, will deal with the morning of our visit which is spent mainly in the Vatican and includes a visit to St Peter's Basilica. The second will deal with bits of ancient Rome and touristy bits. 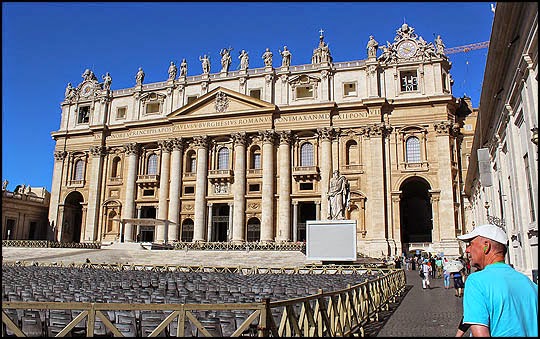 The coach ride from Civitavecchia took about an hour and a bit and our guide, Roberta, told us we would be meeting with another local guide in Rome who was very knowledgeable about the sites we would see. This would be much more than me... I am not particularly religious and not Catholic, so I'm not well up in saints and popes. I've written the next sentence about ten times and scrubbed it so have given up and will leave it at that...!

Our first look at St Peter's Basilica is shown above. The chap is in our party and we all have those little green ear pieces which are attached to a small radio receiver so we can hear the guide, Francesco's voice. Well I could if my ear were shaped so that ear pieces didn't drop out all the time... I felt like a security man with my finger to my ear all the time... 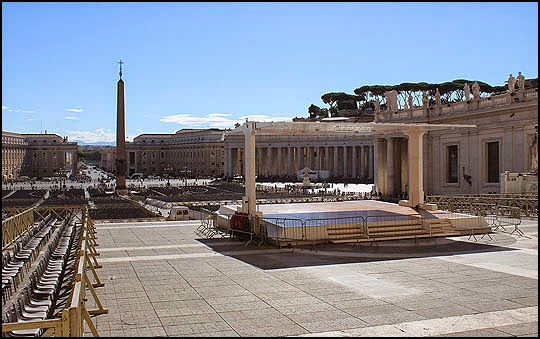 The canopy in front of St Peter's is the spot from where the Pope gives his weekly Wednesday address. It's not always from this spot, so check before you go. Binoculars would be a good idea. 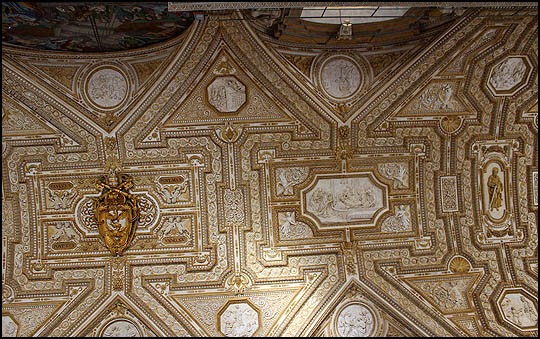 We enter St Peter's where bags are searched and scanned. We are in a large room running along the length of the front of the building with the main doorway into the basilica proper in front of us. This is the ceiling of this reception room. 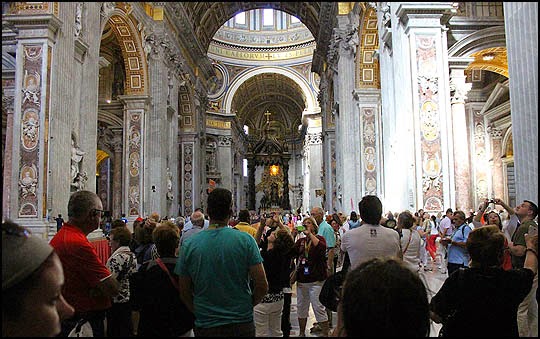 This is our first glimpse inside. A mass of people, many of whom have arms raised - not for any religious reasons, but because they are all taking photos on equipment like phones or whatever that must be held at arms length to see the viewfinder. It's one of modern technology's bug bears - and getting worse with some people holding i-Pads up so they can see what they are photographing on a TV screen... 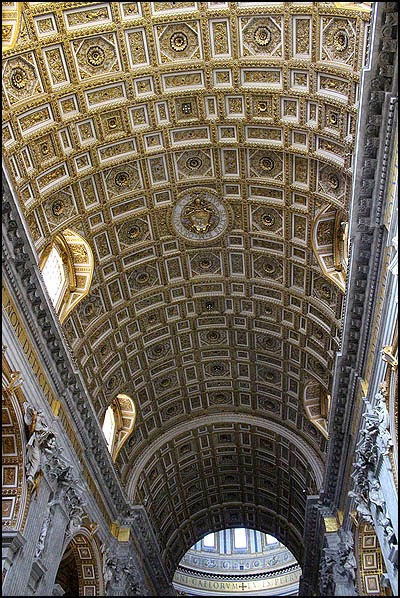 It's always worth looking at the ceiling in any cathedral and St Peter's does not disappoint. We'll come to the dome in a bit, but there are a few other smaller domes, some of them elliptical to watch out for too. 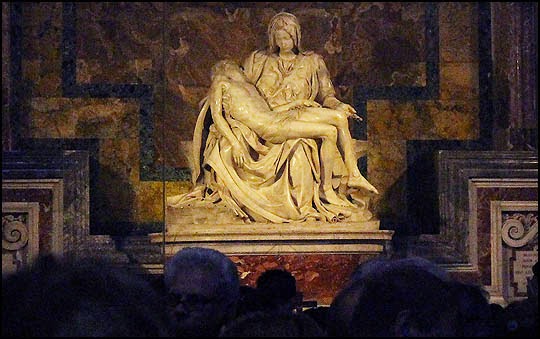 By turning to the right as you enter St Peter's, you come to Michaelangelo's statue of The Pietà. The body of Jesus after the Crucifixion, resting on His mother, Mary's knee. Sculpted by Michaelangelo in 1498-99 and the only example of his work that he signed. He apparently overheard someone admiring it and thinking it was someone else's work so he carved his name into the sash that Mary wears over her left shoulder. Mary is given a much younger face than a woman who had a son in his thirties, but Michaelangelo said that so pure a woman would not age as a normal person. The statue is behind bulletproof glass now, following an attack by a mentally ill person in May 1972 who repeatedly hit it with force using a geologist's hammer, causing much damage. 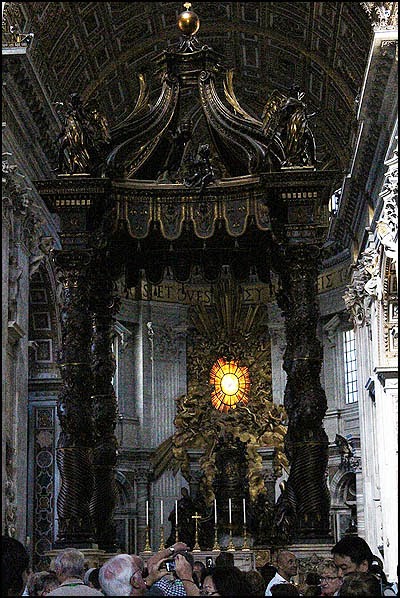 St Peter's Baldachin, directly under the dome and over the high altar and the tomb of St Peter below, it was commissioned by Pope Urban VIII and designed by Gian Lorenzo Bernini. It was built 1623-34 in bronze with gilding. Behind it is the "throne of St Peter", a chair apparently dating from the 12th century but claimed as being the actual chair used by St Peter. Deteriorating, it was placed in a throne of bronze held up by statues of Saints Ambrose and Augustine for the Latin Church and Athanasius and John Chrysostom for the Greek Church. At the rear is the Gloria, a window of yellow alabaster with the Dove of the Holy Spirit at the centre. 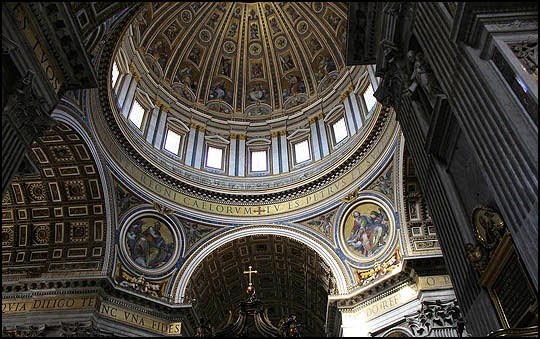 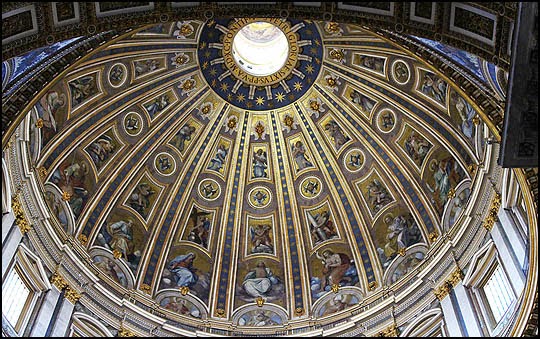 The famous dome is the tallest dome in the world. Not the widest, though. It is slightly smaller than the dome of the Roman Pantheon (which we shall see in the next article), but is slightly larger than the dome of Hagia Sofia in Constantinople (today's Istanbul) which had been completed in 537 A.D. Whilst designs were started in 1506, Michaelangelo took over the project in 1547 and redesigned the dome creating an ovoid shape taller than it is wide, thus reducing the outward energy of a hemisphere.

Michaelangelo died in 1564 having completed the drum upon which the dome was to sit. Work was continued by his assistant Jacopo Barozzi da Vignola, but so slowly that in 1585 Pope Sixtus replaced him with Giacomo della Porta who redesigned the outer layer of the dome, raising it to produce the profile that we know today. The dome was finished in 1590, leaving the next two popes to complete the lantern and then the crowning cross. The letters of the inscription, black upon gold are two meters tall. 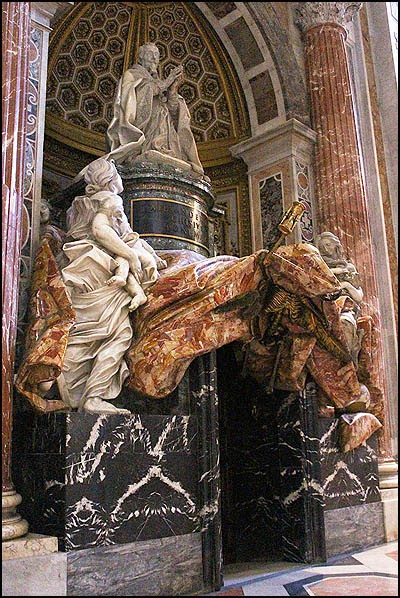 The monument of Pope Alexander VII (d.1667) over a doorway. Bernini's last work, it has the Pope supported by four female figures representing virtues. Only the front two are properly visible. Charity nearest to us, holding a child and Truth with her foot resting on a globe, pierced by a thorn rising from England - Alexander spent much effort trying to suppress the growth of Protestantism. The skeleton of Death, his head covered by a shroud, holds up an hour glass, reminding the Pope that his time is limited. 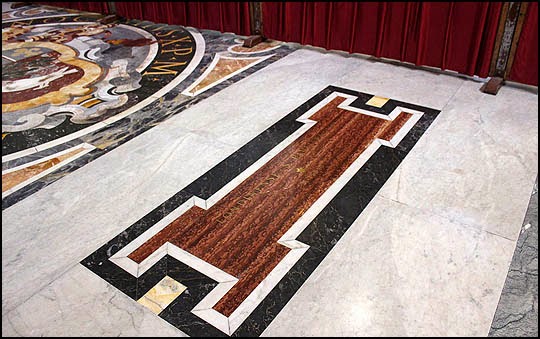 Along the floor of the nave, in a strip of flooring kept free of the wear of passing feet by a double timber partition are marks showing the comparative length of other significant cathedrals of the world. This is the marker for St Paul's cathedral in London and the exact length denoted by the gold star. 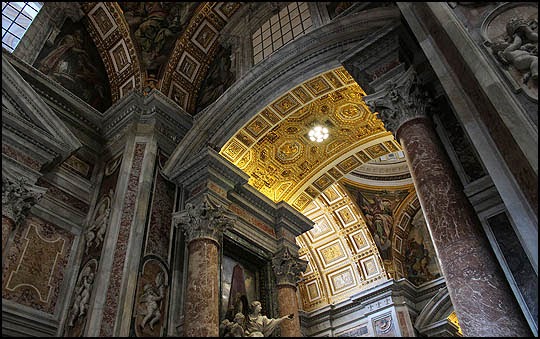 And a small reminder that things don't have to be famous or have any special meaning to be beautiful. This was a random glance upwards, just as a ray of light caught the ultimate angle. 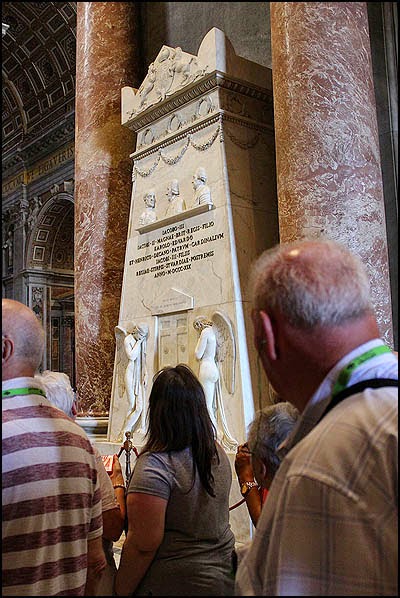 My earpiece dropped out at this point and I didn't hear what Francesco was telling us about this monument. I took a photo and looked it up when I got home. It would have been worth hearing. This is the monument to the exiled Royal Stuarts of Scotland, James (who would have been James III of England) and (Bonnie Prince) Charles amongst others. This is a monument, the tomb is below in the crypt.

Charles II had no legitimate heirs but many illegitimate ones who were either French or Catholic or even both. The throne passed to James II who had two wives. From his first wife two daughters, so the line would pass normally to his son, James, by his second wife. However, in the so-called Glorious Revolution of 1689 the throne was claimed successfully by James II's son-in-law, William and daughter Mary, ruling together as Protestants. The dynasty of Stuarts was ended and the short-lived House of Orange would rule only until the death of William and Mary's daughter Queen Anne, whereupon the House of Hanover took the British throne in the shape of King George I. 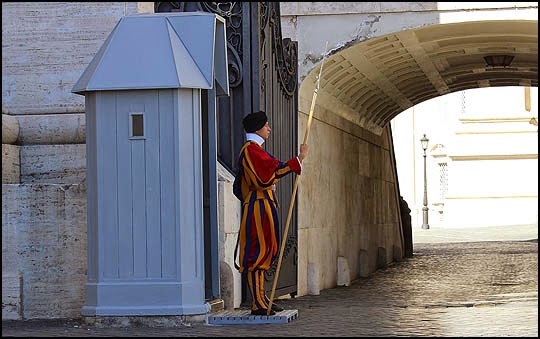 We leave St Peter's and head down the steps on the left of the Square in front of the Basilica. The Swiss Guard check visitors who head for a special tour of the crypt. There are two of these. On one tour you see where the body of St Peter used to rest. On the other, involving uneven footing and tight spaces, you see the final resting place and indeed, the Apostle's remaining bones, sealed in clear plastic containers. Only 12 people at a time can take these tours which must be booked months in advance. 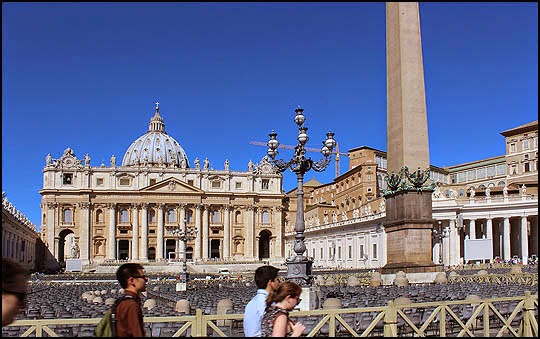 Looking back at St Peter's from the massive piazza. On the right of the basilica we can just see the gable end of the Cistine Chapel. The gable end is all we are going to see of it...

The Romans removed the obelisk from Egypt, one of several taken after a spot of disagreement with a certain Cleopatra. It was close to here when St Peter was brought to his crucifixion by Nero. Hadrian, the first Christian emperor had it moved to the spot of the crucifixion and it has been here ever since, revered as the only "surviving" witness to the event.