A Brief Sojourn in Messina

Thursday 4 September 2014. We are in Messina this morning. Due to the long distance to travel to get back to Corfu for our flight home tomorrow, we will leave Messina at lunchtime and spend the afternoon sailing around the foot of Italy. 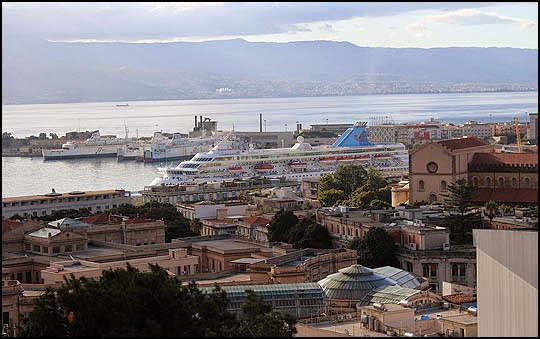 We have booked to do a panoramic tour, which will be mainly by coach. The first stop really is panoramic as we have a view of the Straits of Messina and the town below us from a high viewpoint. 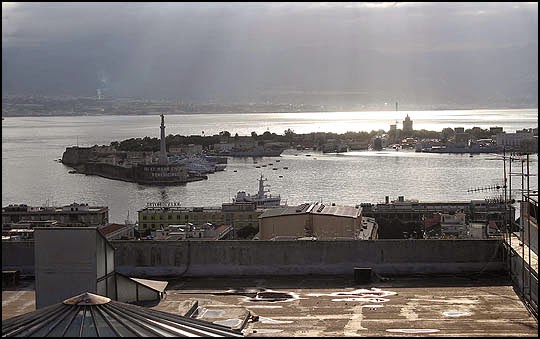 With the sun in our faces, it makes for some dramatic lighting. Messina is on the North East corner of Sicily and the famous strait separates the island from Italy, just three miles away at its nearest point. 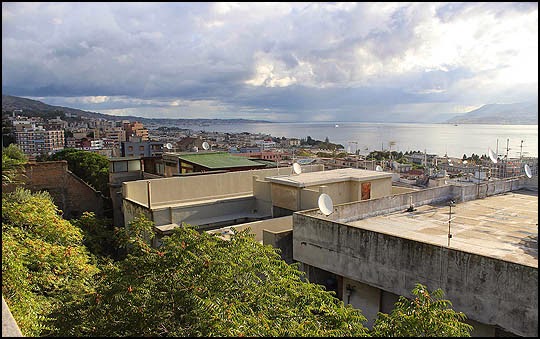 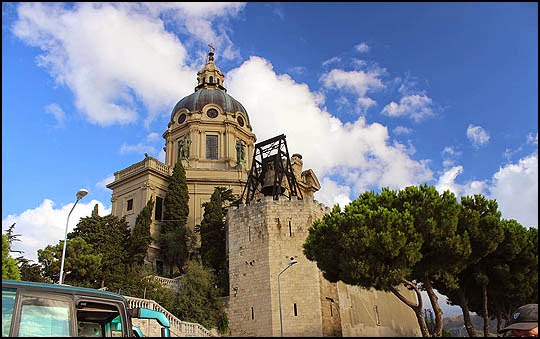 The coach is parked at the foot of the Votive Temple of Christ The King, a modern baroque church of 1900. It has a bell tower that sits below the church on the hillside with a bell that looks far too big to sit inside so instead it sits on the top. It is the third largest bell in Italy. 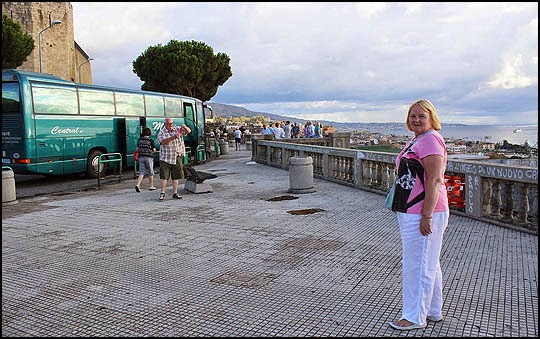 Miss Franny on the viewpoint before the church. It would be much improved if they cleaned up all the graffiti... 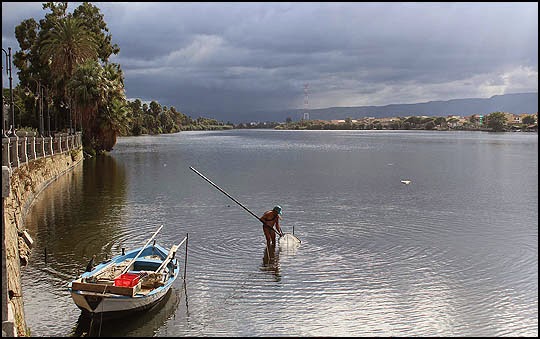 We had only been going around ten minutes after this when someone came down to request a toilet stop. This necessitated a 15 minute stop to use a cafe toilet, so some folks went for a drink and we had a look at where we happened to have stopped. This is a saltwater lake, Lake Ganzirri. The chap standing in the lake has a rake with a net attached to the end of it and is raking the gravel on the lake bed for mussels. 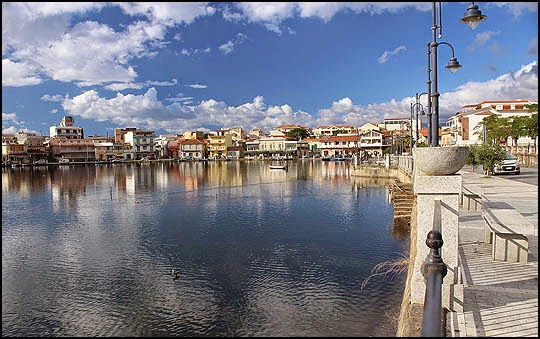 Unplanned though the stop was, the beauty of the place made me think that this was the highlight of the tour stops. With dark dramatic skies looking one way, but bright sunshine looking the other we couldn't have arrived at a more propitious time. 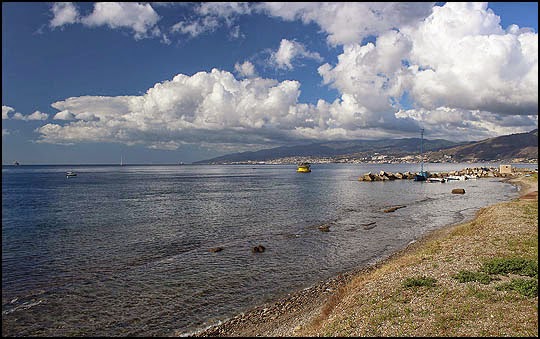 The next stop was on the shore of the Strait, looking back in this shot along the Sicilian coast towards Messina. There were a couple of cafes on the shore and this was taken from their ground. One was completely derelict, the other perhaps just not yet open, but they were both deserted. The guide promised us several times during the morning with much enthusiasm that we would "enjoy" an included refreshment stop. Boy, was she wrong... 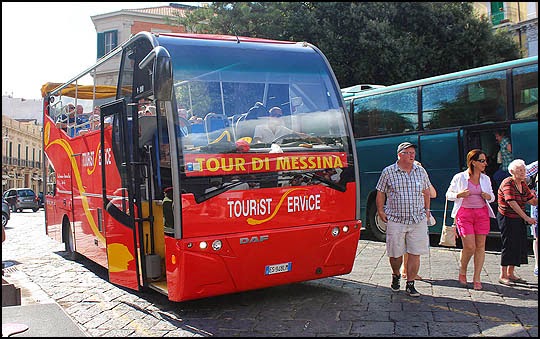 The coach dropped us off near the main piazza in front of the cathedral, with small tour buses touting for custom near us. "Ride on the tour bus?" suggested one hopeful.
"We're on that one..." I said, pointing.
"This is better!" he laughed.
"You're probably right..." I admitted.

We arrived at the restaurant-cum-bar that was providing our refreshment. This wasn't yet ready and we were shown to tables and sofas set out on the pavement. After quite a wait some plastic cups - they may have been bigger than those you get on the top of a bottle of cough medicine, but I wouldn't swear to it... No matter, as they weren't going to be filled... There was a choice of about 5mm of limoncello or there was an alternative - beer - in which case you got about 5mm of beer... There were also some small pastries. No soft drinks, not even water.

Complaints started to rise on every side. We just got up and walked. We already had the time and place of our meeting and complaining, whether to each other or to the guide or to the restaurant, would do no good and would just ruin your day. A lot of travellers seem very keen to do this to themselves, I always think. Besides, it was pretty much what "included refreshments" tends to mean on these tours. So we found instead a nice little cafe and had a latte macchiota and walked out with a small tub of "cream" flavoured ice cream which was absolutely delicious. 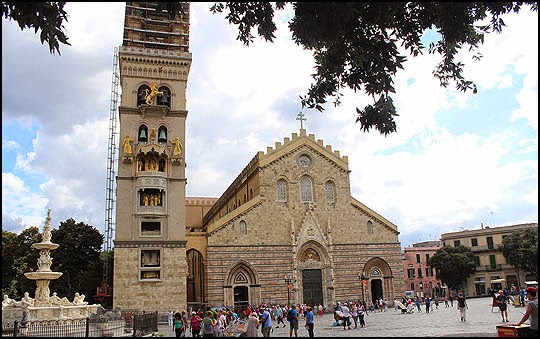 We eventually made our way back to the square in good time to watch the animated clock tower at the side at twelve noon. The ship had been intending to leave at twelve thirty which would have meant missing this, but they extended the "all aboard" deadline to allow tours and independent passengers to see the show. 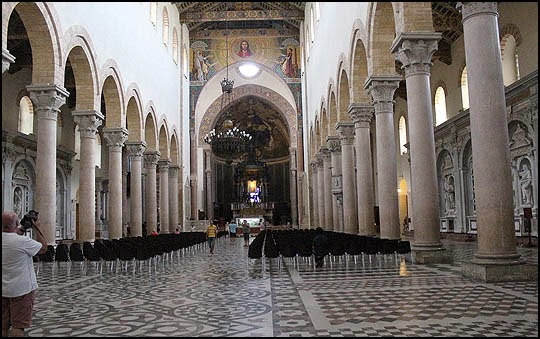 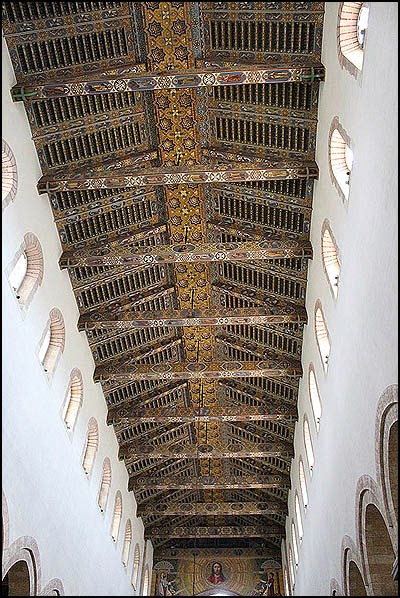 We had time before the show to have a quick look inside the cathedral. It contains the 13th century tomb of Conrad IV, a king of Germany and Sicily, but repeated earthquakes (the last in 1908) and the bombing of WWII means most of the church is reconstructed. 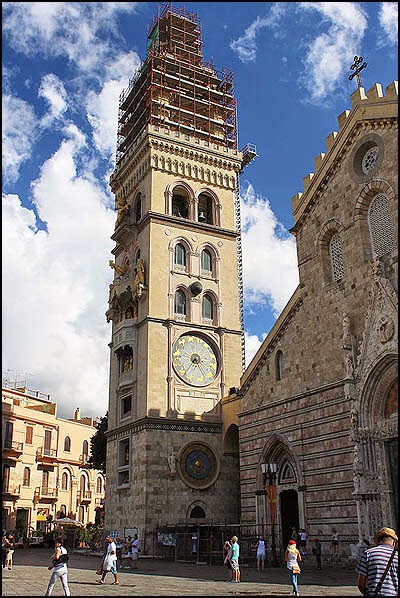 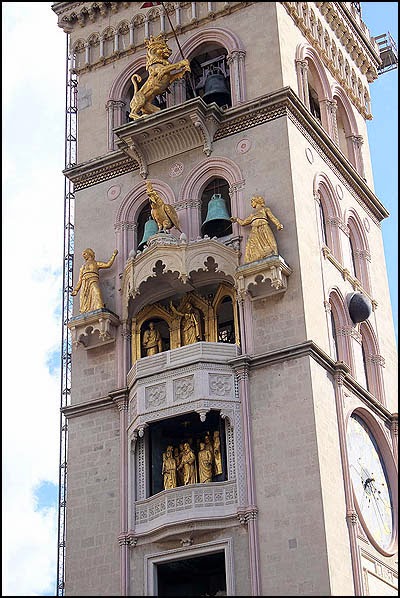 At twelve noon the souvenir sellers stop their incessant peddling of their tea towels, magnets, wooden fold-up fruit bowls etc. and the clock chimes the hour. Following this, the lion in the top window waves his flag, wags his tail and tilts his head back to roar.

Then the giant cockerel wags his wings and crows and then, as the loudspeakers play the Ave Maria, other windows come to life. A golden church appears from behind a cloud as a dove flies overhead; robed figures turn and bow to a throne as they pass before it. I totally missed any movement in some of the windows, perhaps they are waiting to be fixed. No matter how clever and intricate something is, these days it generally has to be judged against the latest Hollywood CGI and, against such wonders, the clock seems to be very slow and intermittent. Feedback and ratings on websites seem to show mixed reception. In 1933 when it was first installed, it must have knocked everyone's socks off. Even today, the first time the lion's head is thrown back and the loud roar comes from the tower, it is a brilliant moment.

At the end of the show, a few people clapped, a few cheered, the tour guides waved impatient flags, the peddlers pounced and the independent travellers from the ship shot off to dash down the hill and onto the ship before it sailed!