Off To Fight in World War One

Another of the postcards from the Hayley Easthope Collection today. A while ago I featured a postcard sent by her great-uncle, Edgar Pedley who served in the 59th Signal Corps in World War One. At the time he sent this postcard in 1916 he was about to set off on his way to France. 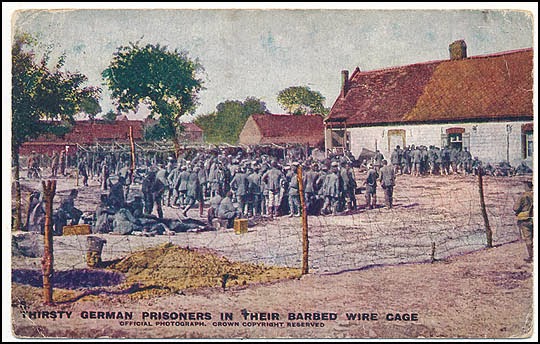 The postcard is one of the Daily Mail "Battle Pictures", of which some 20+ series were produced, each series having 8 views. This is No.8 of series 1 and shows a prisoner of war camp. The caption reads: "Thirsty German prisoners in their barbed wire cage".

On the back of the card the subject is expanded on thus: "The first desire of German prisoners brought to camp is to quench their thirst, and the picture shows how they rush to the water tanks."

Anyone wanting to object to the comma used before an "and" should contact the Daily Mail not me... In the first place before complaining you may want to check whether any of the editorial staff from 1916 are still there... 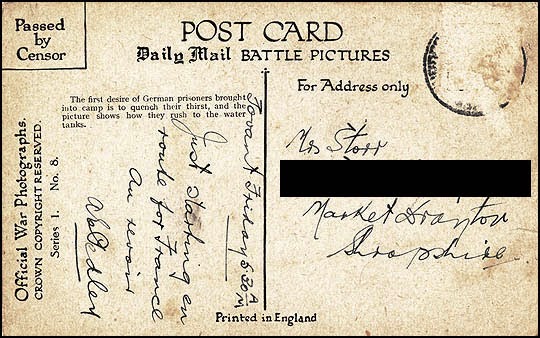 The stamp has been removed, taking with it the postmark so we can't be sure of the exact date. It was an early start for them. Either Edgar didn't have much time to write or the thoughts of what was to come perhaps made him a little reticent. He wrote: "Fovant Friday 5:30am. Just starting en route for France. Au revoir. A E Pedley"

Fovant is in Wiltshire to the west of Salisbury.

Back to the Edgar Pedley Index
Posted by John Burke at 10:43