Monday 7 April 2014 and by the time we surface out of our bed the Thomson Celebration has arrived at Funchal and is moored in the harbour close by other cruise liners, Aida Stella and the Braemar. The crews of these had arranged a 3-way football tournament. 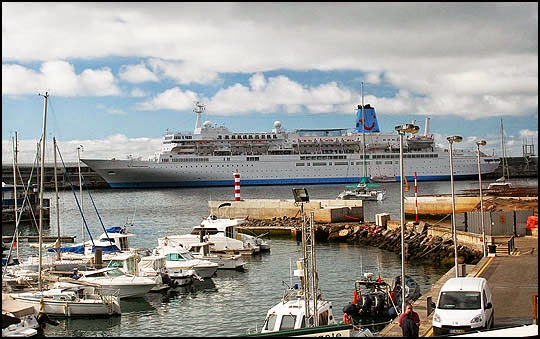 We have been to Madeira twice before, on the tiny ship Carousel of Sun Cruises. The first time Sahara dust turned it into a foggy place of only a few hundred yards visibility and the second time we got soaked by rain which came on as we started to walk back to the harbour from town. Today is much kinder! 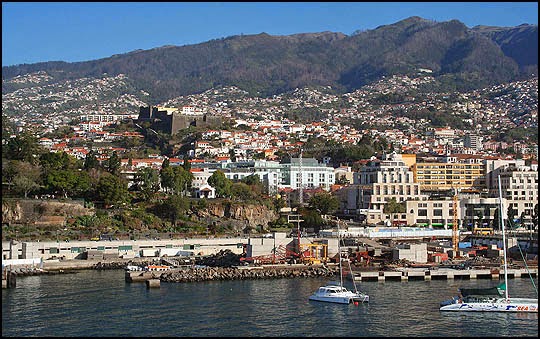 Opposite the ship a large fortress, Fortaleza do Pico, occupies the hillside. In 1566 Bertrand de Montluc led a force of French corsairs in eleven ships to attack Funchal. They moored outside Funchal and attacked overland which meant that the defences of the town were unable to bring any large guns to bear as they were all sited to fire out to sea. Small pockets of resistance were dealt with easily and the city was subjected to a violent sacking for a fortnight. A community of nuns fled the town and took refuge high up in the mountains of Madeira. Their sanctuary, Curral das Freiras, is spectacular and a feature of excursions to this day. The fortress in Funchal was constructed between 50-100 years after the pirate raid. 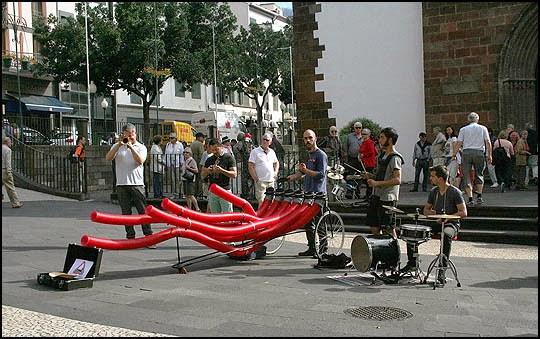 We hadn't booked a tour for today and instead got off the ship and walked into the town. I was going a little gingerly due to still having the blister from a couple of days ago, but it behaved itself and I stopped worrying about it after today!

We found Funchal filled with street musicians, some of them quite large bands and this one featured this curious instrument with bright red plastic tubes. They looked like and probably were drainage tubes. The ends were open and the musician whacked them with a sort of paddle and startlingly it sounded just like a bass guitar! 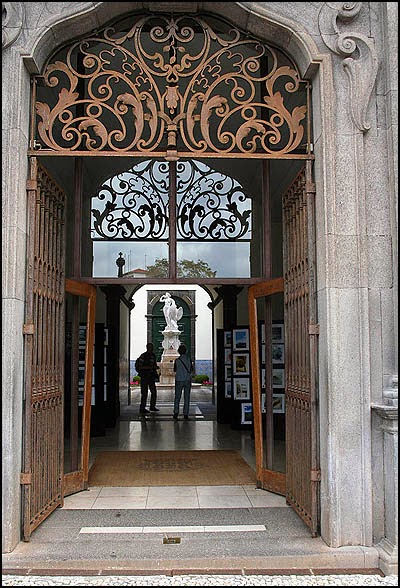 This is the doorway of City Hall. It has some nice ironwork and leads through to a courtyard with a statue. It was just one of several pleasing buildings in the centre of the town. 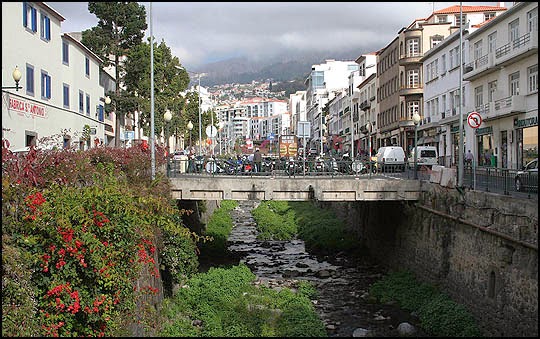 Being on the side of such a steep hillside, Funchal has a few rivers flowing down from the interior to the sea. This was taken from Ponte Do Bettencourt, "ponte" meaning "bridge". The river did not look as if it warranted such a deep ravine, but in 2010 a deep depression over the Atlantic and a few other factors led to Funchal experiencing several months' worth of rain over a short period. The rivers flooded, causing damage except where they were contained as here. They washed so much material down that there is extensive building work going on now to rebuild the Promenade which was badly damaged. Much of it is being rebuilt with the material washed down by the swollen rivers! 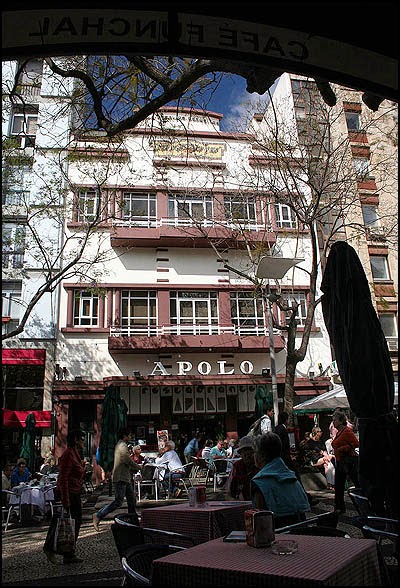 We dropped into seats at a table and ordered a drink opposite another similar cafe that seemed to be occupying a building originally a cinema or theatre. A beggar was moving from table to table, telling some sob story. I just thrust out a hand, palm out as he approached our table and motioned him away. It worked so well I must try it again... 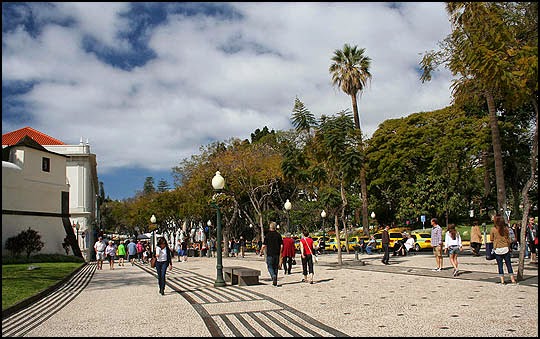 After a couple of hours we were ready to start moving back to the ship and instead of going back down to the Promenade we walked along the back streets for a while. This was a wide pleasant street with cafes, bars, hotels and a few shops on one side and a park on the other. 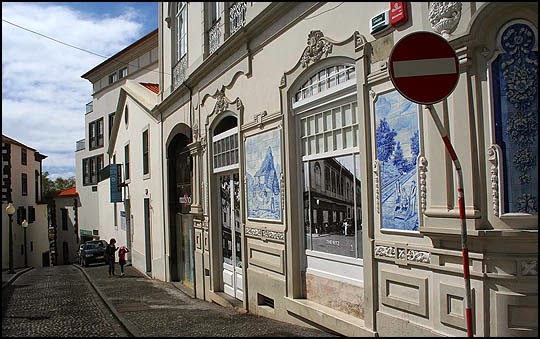 Looking down a side street I saw the panels on the side of a hotel, filled with blue ceramic tiles which showed scenes of Madeira. One was of the wicker toboggans that can be taken down the mountain, being pushed and guided by two "gondoliers" who scoot the toboggan and just hope no motorised traffic will cross their path from a side street! We did it once and it was great fun. 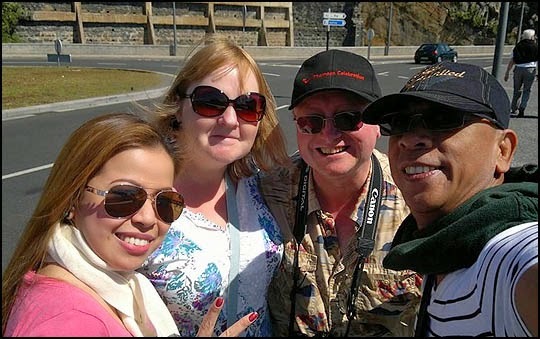 We were back on the Promenade walk and nearing the harbour and I was just putting one foot in front of the other, happy in my own little world when I heard a voice say "We think we know you!" I came out of my daydream to find Tomas and Maris smiling at us. We laughed and chatted and Tomas took this selfie of the four of us. I put my camera on the wall and used the self-timer and managed to chop off the top of our heads... I'm sure Tomas won't mind me using his photo! 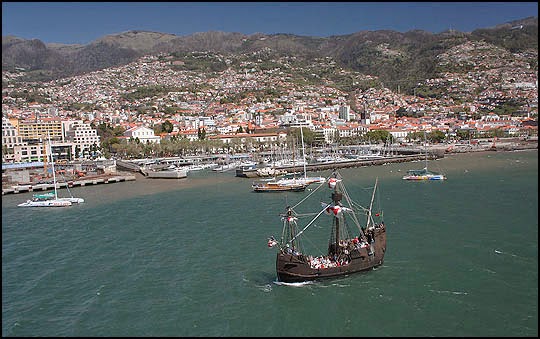 Back on the ship, later that afternoon we watched the replica of Christopher Columbus's ship Santa Maria return with her cargo of tourists who had gone out for a spot of dolphin watching, swimming and deck swabbing. They must have been friendly as the fortress guns remained silent. Next time, we'll have a look at a few dolphins ourselves!

Oh and our crew lost the football tournament...