It's that time of year again! So often this weekend marks our first gig of the year and so it was for 2014. We set off down to Wellingborough in Northamptonshire early Friday morning 21 March. 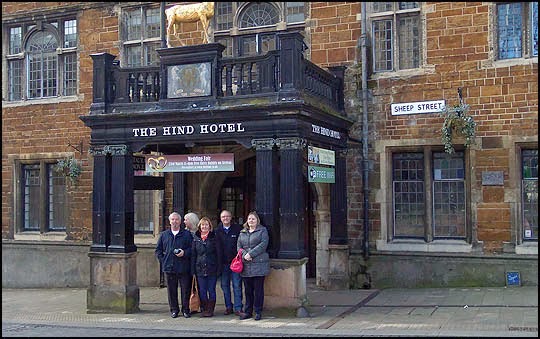 Our destination was the Hind Hotel, the venue for this private weekend for the regulars and friends who were originally drawn together on the forums at billyfury.com. Although the weekend is held in remembrance of Billy Fury, it is just a Sixties music based weekend - the theme is Billy Fury and his time rather than just the man himself. Of course a rather disproportionate number of his songs may be heard during the weekend...! 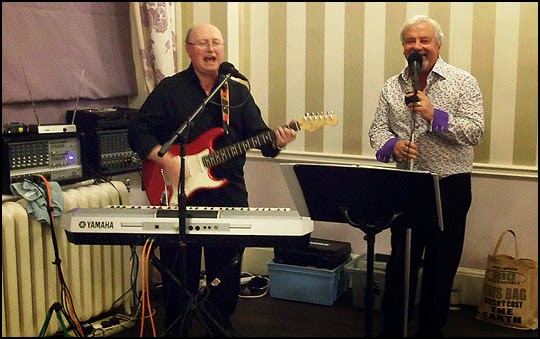 Creeping Bentgrass started things off on Friday night. We had several acts and some occasional singers and more were due to arrive on Saturday for the main night. 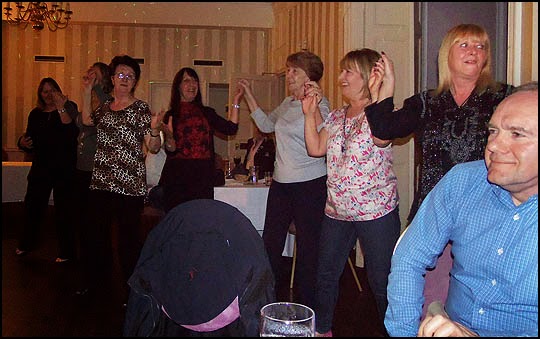 We don't have any facilities to play recorded backing tracks so apart from all our gear, our good friend and fellow entertainer, Dave Jay from Macclesfield had brought his own PA and means of playing CDs, mini disks and mp3s on memory sticks. 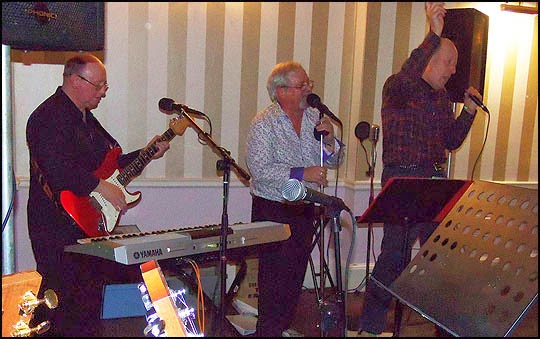 We invited Chris Eley up to sing Johnny B. Goode with us. A bit of a groovy mover is our Chris on the dance floor and you'll find his name against a few album notes if you look. I think he enjoyed himself here!

Saturday came and we went out for a breather of fresh air. We were joined by Peter and Shelagh from Garstang who we have known for years and who were going to do a couple of numbers with us in addition to their own set on Saturday night. For some reason the girls managed to spend ages at a button stall on the market. We weren't sure quite how they managed this, but their excuse seemed to be that the button stall was huge... Still confusion reigned in our male minds. Is there a rule that you have to look at every button? Is it like a collection thing - "Hey look I haven't got this one!" - or what?

We went off to have a look at the second-hand book stall (but without peering intently at every book). However there was one somewhat untidy gent who was certainly old enough to know better who was peering very intently at every picture in a book of 1970s pin-ups... We thought of forming a queue behind him... 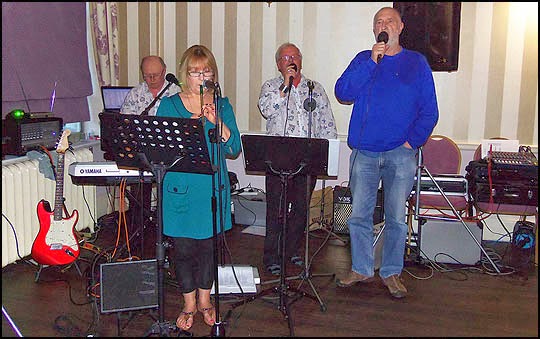 Saturday night got started. A couple of acts had had to give backword and we stepped in with an impromptu set, bringing up Shelagh and Dave Savage to help out on The Fields of Athenry and performing a set of mainly ballads, a couple of Bee Gees classics and our tribute to our favourite woman - When You Say Nothing At All... We played a few "Billys" to get the audience in the right mood. 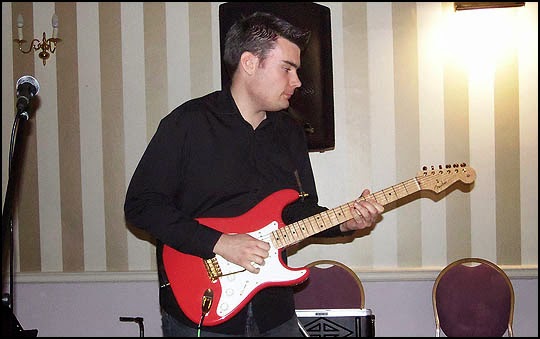 Steve Reynolds played a set of instrumentals in the classic Shadows style, which he applied not only to Shadows tunes but to more modern stuff too. He played the Westlife hit Wind Beneath My Wings which he said he had recently played to Simon Cowell and Amanda Holden at the Britain's Got Talent auditions. It takes nerve to go in front of that sort of panel so every respect to you Steve! 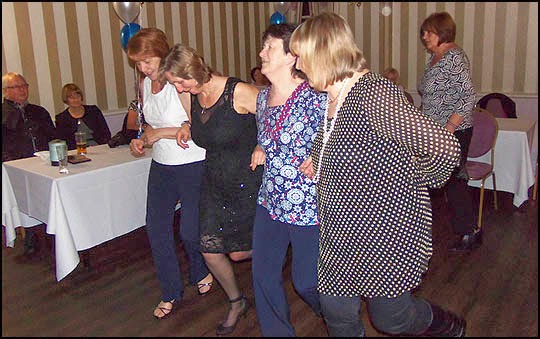 Certainly he had the ladies lining up to do The Shadows' Walk... Thankfully injuries were kept to a minimum and a couple of times they nearly got it right...

I've not got photos of everyone I'm afraid. Roger Sea gave a fabulous set and Phil Jennings had our table enthusiastically belting out the backing vocals to his version of Bobby Darin's Things (like a walk in the park...) which I think he appreciated. He looked in danger of bursting out laughing at one point though... Sorreeee! 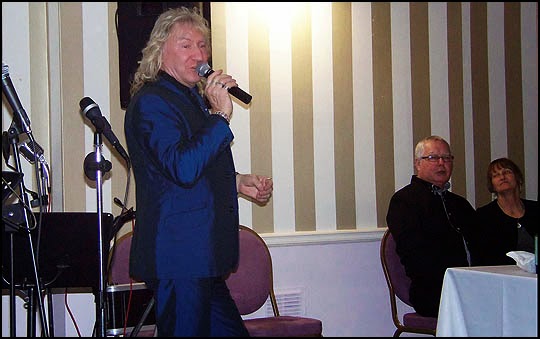 Local lad Snowy is always up for a raucous and energetic set and this year was no exception - even though only a fortnight before he had been undergoing an operation to have two stents fitted... We watched aghast as he launched himself wholeheartedly (sorry!) into voice, leg and arm contortions and I wondered where we would be able to get an oxygen tank at such a late hour... A brilliant showman!

Dave Jay's own set was mind bogglingly good. I think his adrenaline was kicking in - looking after a stream of singers is no easy task. They do not always think to arrange their songs on a CD in the order they want to sing them and it can be a nightmare for the techie looking after them. Whatever it was, I've never heard a better set from Dave - well done that man! 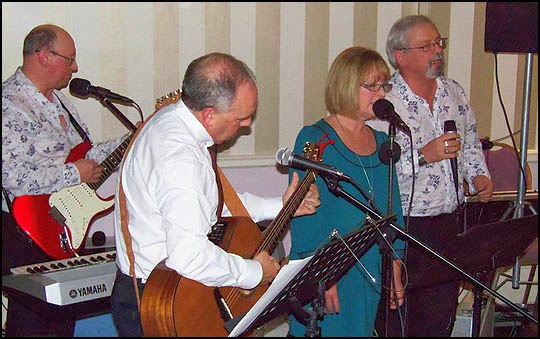 Peter and Shelagh did their own set and brought us on for the last two - Nancy Whiskey's Freight Train and The Beatles' All My Loving. Peter plays guitar and in his own description "strips back" songs to their basic tune with a simple arrangement. They went down well. 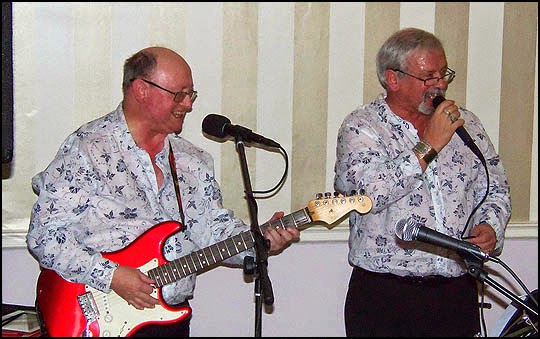 We stayed on to play our main set - Little Sister, I'd Never Find Another You, It's Now Or Never, Lost Without You, Suddenly You Love Me, House Of The Rising Sun. On The Tremeloes song we had the audience belting out "Zie zie zie zie!" and everyone looked as though they were having fun! We certainly were! 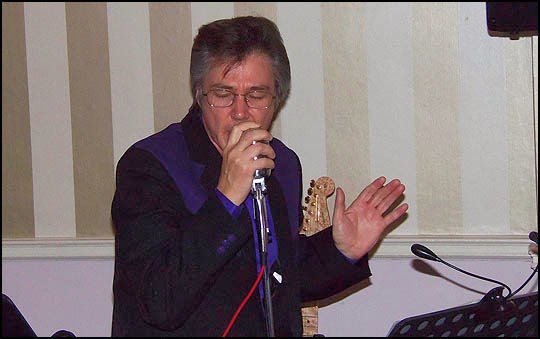 The night was brought to a close by this chap - the one and only Johnny Storme, all the way from the Isle of Wight. Something of a legend to the Billy Fury forum regulars and certainly as far as the ladies are concerned, something of a heart-throb! I usually settle for a manly hand shake myself, but you couldn't hope to meet a nicer guy than Johnny and after last year's absence he was back in excellent form with a great set. 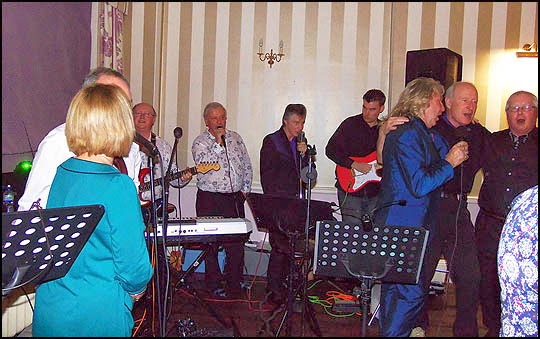 And then all too soon it was the end of the night and as dictated by tradition, all the singers gathered to the floor to sing Billy Fury's greatest hit Halfway To Paradise with the audience up on their feet, forming a ring to sing along with us. A great night and some great comments. Dave Jay thanked us publicly over the mic, saying we had made it a great weekend. Well... we made our bits good... But thanks to all who gave us some very kind comments and compliments. And of course we all agreed to come back next year and do it all over again!