Saturday 5 April 2014. The Thomson Celebration docks in Las Palmas, Gran Canaria and we have a lazy start, trotting down the gangplank mid morning to go for a walk along the beach at Playa de Las Canteras on the opposite side of the short peninsular. 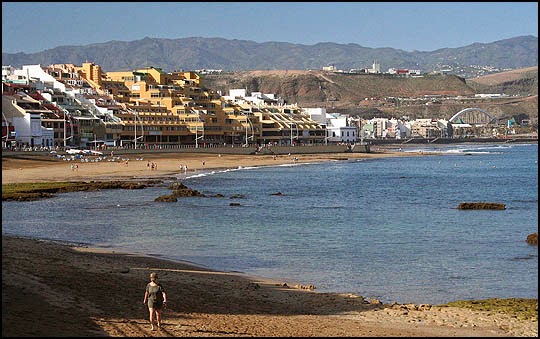 The walk takes us past lots of busy people setting up for some sort of fair or festival. Signs tell us that it is a Festival of the Sea and there are some snazzy looking boats being displayed. We'll take a closer look on our way back once the festival is properly up and running. 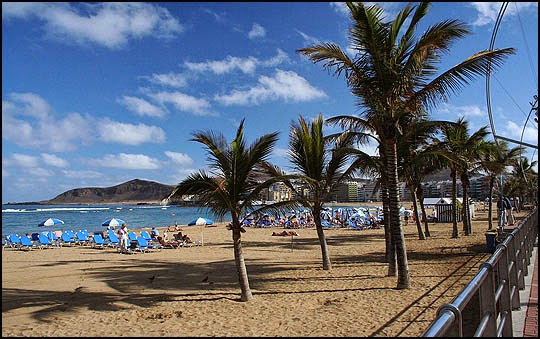 Having reached the beach around halfway along it, we turn right and walk slowly up almost to the end of the Promenade, taking in some of the strange and bewildering sights along the way. Not that there's anything strange and bewildering about Playa de Las Canteras - it's a great sandy beach with a few palm trees, a clean sea, lots of deck chairs and bars and shops all along the sea front.

It was more the antics of the "keep-fit" brigade who seem to haunt this stretch of beach that had us in stitches at times. Even if we ignore the blokes in lycra who jog desultorily along the Prom until they spot a good-looking girl on the beach and then stop opposite her to place one foot or hands against the sea railings and proceed to pretend they are stretching muscles, there were some really weird exercises going on...

One chap caught my attention by racing sideways along the beach near the sea's edge, doing starfish impersonations. He would do two side-steps facing the sea and then turn and do two side steps facing the Promenade, waving his arms up and down like a crab doing star jumps. He certainly was shifting though! You could also tell where there was a topless sunbather by the small gatherings of blokes old enough to know better who congregated against the railings "looking out to sea"...

"God, she's not bothered, is she?" said Fran as one well-endowed girl bent over at right angles, to dry her hair after coming out of the sea, whilst at the same time doing a good impression of a four legged animal... By heck... time to move on and head back! 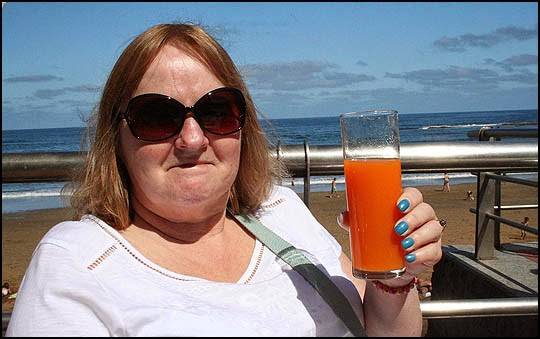 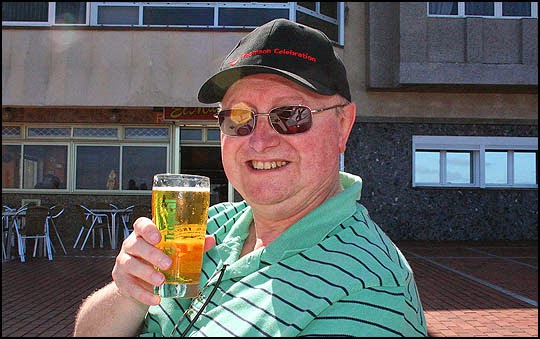 We stopped for a drink and I remembered that the Spanish word for orange is naranja, but they hadn't any anyway. They did have something that looked as though it was loaded with a few thousand E numbers, but it had mango and a few other ingredients. Miss Franny approved of it thankfully and I settled for a small beer.

We were going to walk all the way down the Promenade to the opposite end, but this was the first time I had worn sandals since last year and I could tell that my right foot was starting to rebel. We had passed the point where we joined the beach from the ship, but by then I had a blister and we decided to head back over the peninsular, getting slightly lost in the process but eventually coming out to somewhere recognisable. 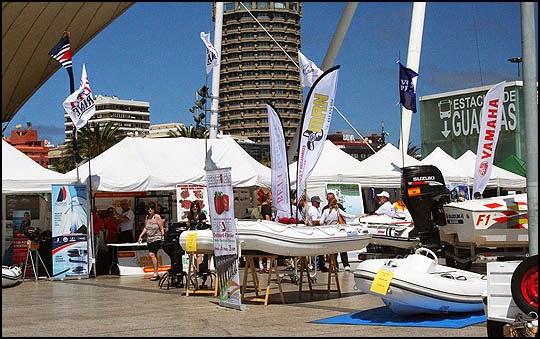 By now the Festival of the Sea was in full swing and we stopped for a quick look. There were lots of sales people willing to tell you everything about their inflatables (ooh-er...) and rigid bottoms (even more ooh-er...) but a look at the price tags even allowing for the fact they were in Euros not sterling, made me decide quickly that a purchase was not feasible. Besides I'm not sure I could have convinced the Captain of Thomson Celebration to tow any purchase behind us for the week... 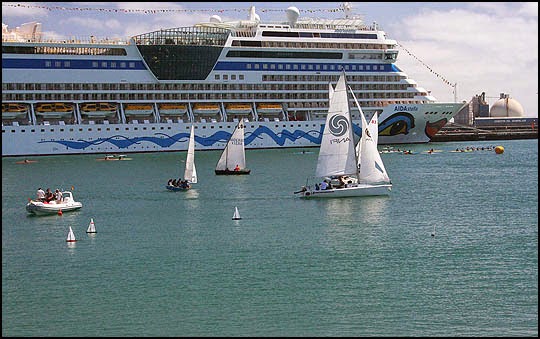 Meanwhile in the harbour there was even more activity going on. Small yachts were sailing to and fro and in the motor boat on the left a group of men with radio control sets were racing even smaller yachts around a set of bouys. 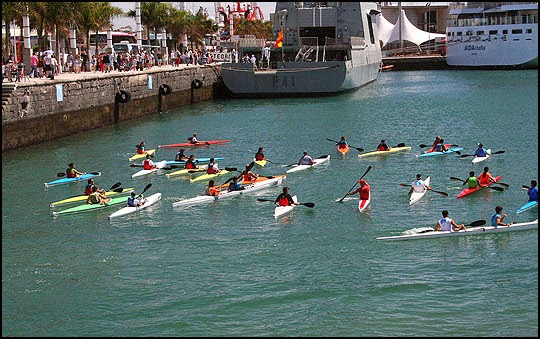 A crowd of enthusiastic youngsters were paddling kayaks up and down the harbour side, watched and cheered on by a few groups of onlookers, most of whom had no idea (like me) what they were doing. Just visible at the top of the photo is a small Spanish Naval gunboat that was open to visitors. 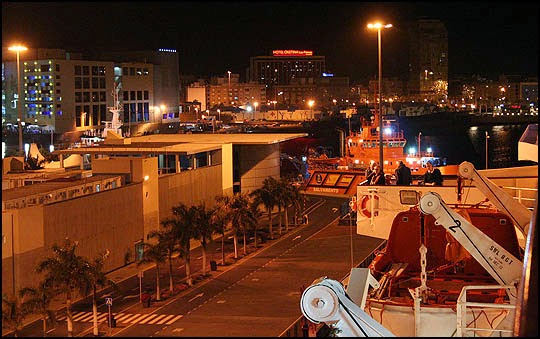 Several holidaymakers were joining the ship that day so it was late by the time we set sail again. We spent the afternoon enjoying our balcony and reading and then found Manny in the restaurant for our evening meal. Then we spent time in Horizons bar listening to Tom and Maris and chatting with them between sets.

Then we wrapped up a bit and went back on the balcony to watch as the officers on the bridge got ready to guide the ship away from the dock and out of the harbour to head overnight for our next destination, La Isla Bonita - La Palma.