The Principality of Monaco

Our excursion coach comes to Monaco and we climb out and climb on upwards, past the Oceanographic Museum of Jacques Cousteau to Monaco Ville - the old town up on it's promontary rock overlooking Monaco and Monte Carlo. 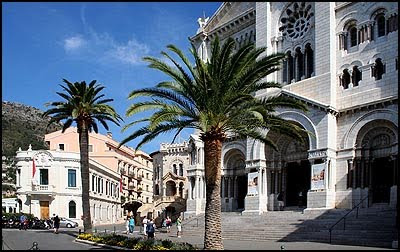 We come first to the Cathedral St Nicholas. This is the resting place of Grimaldi princes and princesses. 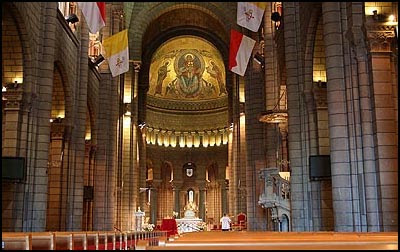 Inside the cathedral. There were fresh flowers on the graves of Prince Rainier and Princess Grace. Considerably more for ex-film star Grace Kelly in fact. 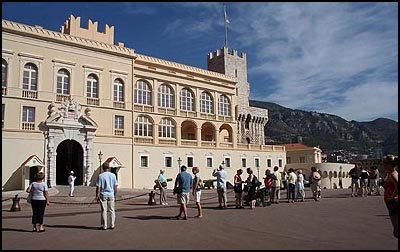 The Royal Palace of Monaco. Currently the home of Prince Albert II, the Sovereign Prince of Monaco.

Monaco is small and does not have an army of its own. The Royal Guard - the Compagnie des Carabiniers du Prince - are "borrowed" from France. Which at least ensures that it is extremely unlikely that Monaco would ever declare war on France... 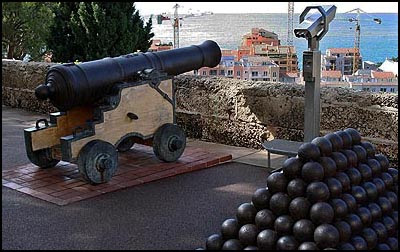 Looking over the edge of the promontary in the opposite direction to Monte Carlo we see the ancient defences of Monaco. Whilst the chap in charge of the cannon asked which way to point it, the lookout fumbled for another 20p as the binoculars went dead...

Along this coast you see most of the old towns up on high steep hills. There were many pirates on the Mediterranean and it was easier to run into low lying towns for a spot of looting, rape and pillage than it was to run up a hill, grab a likely wench and then say "Hang on a minute love, I'm all out o' puff..." Also there's a limit to how high the cannon on a ship can point! 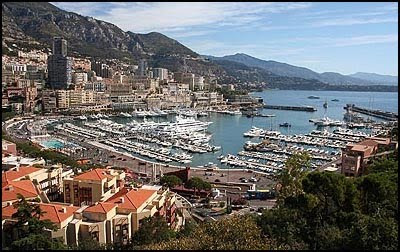 Looking down from Monaco Ville to Monte Carlo and the harbour.

The huge yacht in the centre is Lady Moura the yacht of Prince Albert.

The Constitution of Monaco had to be re-written a while ago. Whilst Prince Albert has two children, they were both born out of wedlock and cannot be heirs to the throne. He is now married to Princess Charlene, formerly Charlene Wittstock, a South African Olympic swimmer though no children have yet come from the marriage. The former Constitution stated that only direct children from the last prince could inherit the throne so there was a danger of there being no eligible heir. The Constitution now allows siblings who are direct descendants from the previous prince to inherit, so the current heir to the Grimaldi dynasty is Princess Caroline of Hanover, Albert's sister.

Ah... Princess Caroline... I fancied her from my early teens... She was easily the most beautiful of all the world's eligible princesses before Miss Franny came along and took me off the market! Had she ever popped into our local I might have been Prince Consort-in-Waiting by now...

Large versions of the photographs: available from this set at Flickr.