9 Aug 2006. Wednesday morning finds us back in France, in Marseilles. Not having booked any tours, we left the Island Star for a bit of exploring on our own. 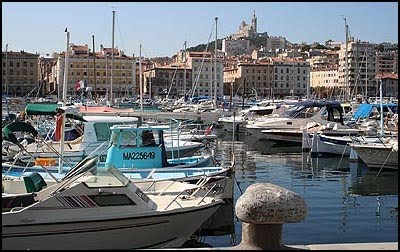 The free courtesy bus, provided by the cruise company drops us off at the Vieux Port - the Old Port of Marseilles.

You can't believe the number of boats here! At least a thousand boats and yachts are sitting in the huge marina, with people on perhaps one percent of them. Does anyone, anyone at all, have a boat based in a marina that they take out every weekend for a sail?

It is a hot day - perfect holiday weather! There's a bit of a smell... 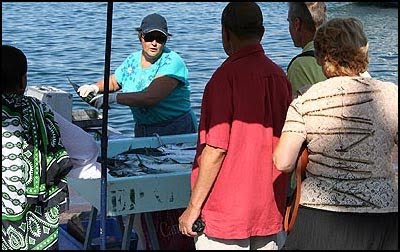 The fisherman has just landed his catch and his wife is laying fish out in trays of ice, lopping off heads and chucking bits into plastic bags that are being snapped up by enthusiastic buyers.

We resist with effort and walk around the marina, coming to one of the two forts that guard the harbour entrance. 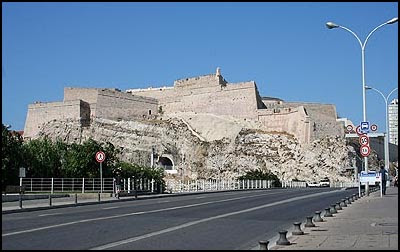 The Fort St Nicholas was built by the Chevalier de Clerville for Louis XIV. Louis reigned from 1643—1715. The fort was 200 years too late to defend Marseilles from the Spanish of Aragon.

The harbour was protected in 1423 like most harbours by a massive chain suspended just above the water. We are talking big links here, not something you could unpick with your fingernails. They were designed to take the bottom out of any invading ships. The invaders in this case nicked the chain and took it back to Valencia. Yah Boo... 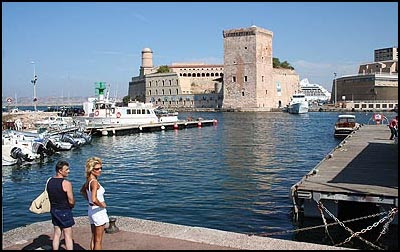 On the other side of the port entrance is Fort St-Jean. It was built by Louis XIV again at the same time as the other one. The Sun King of France said at the time (this is not a joke...) "We noticed that the inhabitants of Marseille were extremely fond of nice fortresses"

Ha hahhhhh! Nice try your Majesty. He actually built the fortresses to quell a rebellion in the city. The cannons of the forts pointed inland rather than out to sea!

During the Revolution the Fort St-Jean was used to imprison Louis Philippe II, the Duke of Orleans and two of his sons. During World War II the Germans turned it into an ammunition dump. This exploded and didn't do the fortress a great deal of good... 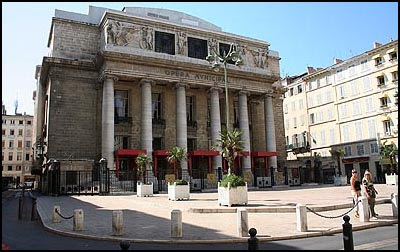 It was far too hot. We did the French thing and sat outside a cafe with a drink on the corner opposite the Opera House seen here. I breathed in deeply hoping for a little aria, but it was just too hot...

The shopping streets were probably a bit cooler as they kept out most of the sunshine. At least that was Fran's excuse. 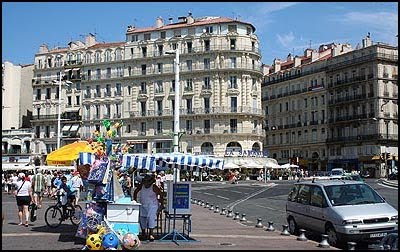 Then after a mere lifetime, we made our way back to the colourful waterfront of the Vieux Port before catching the courtesy bus back to the ship.

Next, we take a bike ride through Barcelona on four wheels - that's two each, right?

Large versions of the photos: All the photos from this holiday can be found in this set at Flickr.
Posted by John Burke at 18:55