A Wet Day at Myerscough 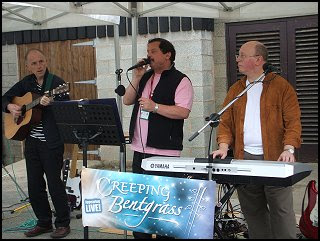 Well we've been playing Myerscough College's open day events for years but yesterday was the wettest one since our very first in 2002!

Despite that a phenomenal number of people braved the weather to come out to see everything that was going on, but understandably not a lot chose to sit on the row of chairs that had been placed in front of our spot! Some brave souls stood and listened, danced, sang and cheered and we thank you for that.

We played The Kink's Sunny Afternoon, but it failed to do the trick and so we resorted to Creedence Clearwater Revival's Have You Ever Seen the Rain which gave us a certain amount of audience participation...

We played it again several hours after the first playing and David related how someone had yelled "Sod off!" as they passed. Then he did a quick "oops!" and apologised for swearing but was then faced by a very indignant 5-year-old who tore him off a strip to the amusement of everyone around us. "There's lots of children here, you know!" she said, hands on hips. I promised to wash his mouth out with soap and she nodded and, with a final stern look, walked off back to her parents who were killing themselves.

The previous night we played out at Heskin Hall for a steam fair in a large marquee. It was good to hear Fran and Jeannie relate that they had heard someone at the entrance saying to his mates "Oh, great! They were here last year and they're fabulous!" A man of taste!

And yes, I know I'm supposed to be taking it easy because of the old ticker, but we cut down the set at Heskin from our usual 4+ hours and David keeps giving me dire threats if I start to set up or carry anything heavy before he's got there to help.

And finally, our thanks to Peter and Shelagh Cooney who came to Myerscough to do a set and give us a bit of a break. I appreciated it as I'd got a huge blister on one finger which burst and needed to dry up a bit before I could carry on. "Can you still play keyboards?" asked David. Relentless...
Posted by John Burke at 08:37