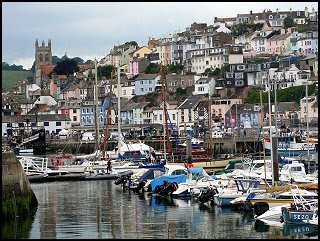 Just to round off the posts about our weekend in Torquay (before the next weekend actually hits!) here are a couple of views of Brixham where we had gone on the Saturday.

We had been before and the roads are somewhat exciting around the harbour - very narrow streets with at least one hairpin bend that requires you to try your best, then reverse and try again! Single-track streets that are two-way etc. etc.

Anyway we chickened out and went on the bus. This made it more relaxing and used less fuel which was a bit hard to come by that weekend!

The harbour is lovely. A typical fishing harbour, with pastel painted cottages lining the hills behind and to the sides of the cove.

This is the unlikely landing point for William, Prince of Orange who led "The Glorious Revolution" to become King William III and deposed James who it was feared would lead Great Britain back to Catholicism. It is called the Glorious Revolution because it was mainly bloodless (though I'd be willing to bet someone got a bloody nose over it somewhere...) However the fact that he turned up from foreign parts with a dirty great army and was suddenly given the crown of England could justify the thought that there had been an invasion. It may have happened to have been a good time to be invaded but when he jumped onto the quay at Brixham and gave his speech the locals were probably a bit bemused.

"Woss he say?"
"Dunno - it's all in foreign innit? Oy! You! I'll buy your fish, how much a pound? Talk in English can't you? Ow! Me nose! I thought this was supposed to be a bloodless revolution?!?"

His imposing statue is either less than flattering...or the nose has fallen off at some point. 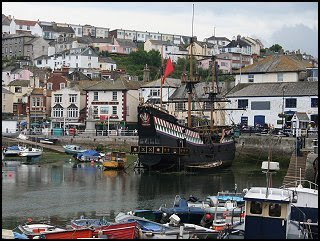 The other reminder of history is a replica of Francis Drake's ship the Golden Hind, in which he sailed around the world. (I mean in the first one...not the replica)

In fact there's another replica in London and they look nothing like each other. This is possibly because it's hard to build a replica when we haven't a clue what the boat looked like. What we do know are the measurements of it and the fact that it is highly likely that there was a pointy bit at the front, a window or two at the back and a deer's head stuck on it somewhere as otherwise it would have been called something else.