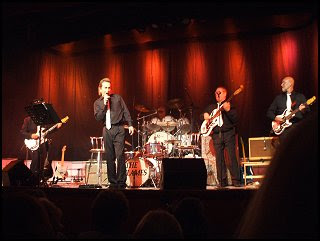 This was why we were down in Torquay for the weekend (see previous post).

Tony Harte, lead singer with the 1960s band The Honeycombs had brought this show to our attention and we had booked the show in Torquay after finding there were no dates (as yet) booked up in Lancashire. If we were going to travel it may as well be to somewhere nice we figured!

Also on the bill were John Leyton (Johnny Remember Me, Wild Wind, and a few not inconsequential films such as The Great Escape and Von Ryan's Express) and Craig Douglas (Only Sixteen, Teenager In Love), both these singers being backed by a band called The Flames.

We went over to Babbacombe early and were nicely ensconced in a local inn, waiting for a meal to be placed in front of us when Tony and the rest of The Honeycombs members came in. We've swapped messages and emails via the excellent Billy Fury website, but this was our first meeting.

It would be fun to suggest he lives up to the image of vodka-swilling reprobate that he likes to put about, but truth is he comes across as a great guy! And once the show started he and The Honeycombs work hard as they filled the entire first half of the show. Have I The Right is, of course, their biggest hit and it still sounds great today! Tony and the boys (yes a male drummer these days, though they joked that it was Honey Langtree after a sex change!) do some of the original Honeycombs songs and a running tribute to a number of late 50s and early 60s singers with Billy Fury's Halfway To Paradise getting the audience singing!

Singer Kelly brought a bit of feminine glamour to the proceedings and she sang a few excellent numbers including Connie Francis's Stupid Cupid and a brilliant duet with Tony providing the harmonies. I spoke to her afterwards and she said it was only her 5th outing with The Honeycombs. She's made an impressive start then!

Aaaah - and those matching Burns guitars look and sound the biz! I play Fender Stratocasters and the only time I've played a Burns is for a brief try-out in a guitar shop. I like my Strats though!

Part Two and The Flames do a couple of Shadows numbers before introducing Craig Douglas, who delivered a good set with some gentle self-deprecating quips; "I've been singing these songs day in day out, decade in, decade out..." 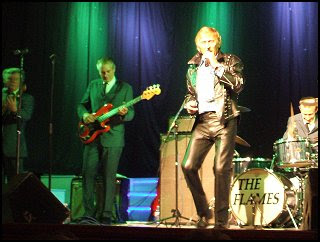 Then on came John Leyton in leather jacket and trousers, looking and sounding the business and setting off to a good start with Shout Shout Knock Yourself Out. Wild Wind and my favourite JL song Son This Is She both got an airing before the finale of his great hit Johnny Remember Me. He then did an encore of Sea Cruise which brought the show to a rousing finish.

We met up with Tony and the rest of the Honeycombs afterwards and he lost no time in separating me from Fran for a photo! Smooth operator that he is! However he has to admit that he has too much hair and is too slim to be seriously sexy like me...

John had a queue in front of him - mostly being held up by a determined lady who had brought 964 photographs to be signed... We've met a few times before - maybe just as well, seeing as Tony yelled, "John, have a word with my mate - he fancies you like mad...!"

A great night! And if you bring the show up north Tony - we'll see you again! 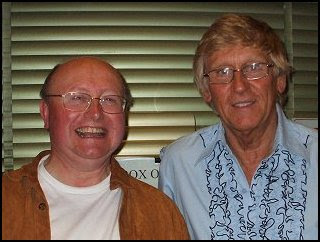