A Sinister Turn of Events 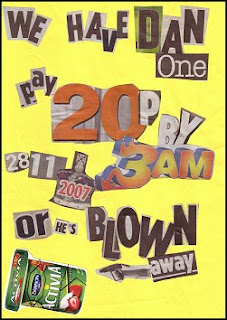 A missive has been received!

This ransom note came to me yesterday from an anonymous source.

It appears that a person or persons unknown - well that's what they think anyway - is attempting to cash in on the misfortune of others by threatening to "blow away" the missing yoghurt.

The fact that the weapon depicted looks suspiciously more like a hair dryer or drill than a gun and the fact that my photofit picture has been used rather than an actual photo of Dan One - who is an English yoghurt rather than the American version that I found for the photofit - leads me to think they haven't really got the yoghurt at all and he's probably still safe and well and enjoying his travels somewhere!