The Blackpool Belle (No.2)

Must be the day for it - this is my second follow-up post of the day! I have previously mentioned the Blackpool Belle illuminated tram that I remember well trundling up and down the Promenade during the famous Illuminations, but which got sent away to America during the later 1970s. 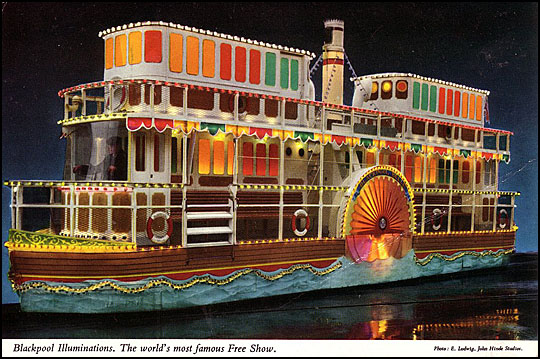 I had a wander around the Hoyles antiques market in the Olympia building in the Winter Gardens complex this morning and came across this postcard of the tram, taken by the John Hinde postcard firm. It was probably taken in or close by the tram sheds as:

John Hinde were extremely good at paint jobs though and the background has been painted out and the foreground darkened and perhaps coloured to look like night with the tram lights reflected in a puddle.