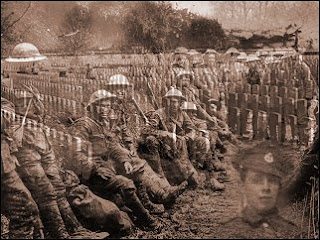 Talking of online music to download (see previous entry); as it's Remembrance Sunday, I've uploaded a track from our new CD for free download.

It's The Green Fields of France a beautiful song that sums up the day. Click on the song title to download it.

Yesterday I got out the keyboard and microphone and spent the afternoon recording a version of The Beatles' song "This Boy", one of their earlier tracks as it was the B side of the hit "I Want To Hold Your Hand. Thinking about it, it may even have been a double A side in fact - someone with a better memory give me a prompt!

I had great fun sneaking a guitar bit in from "Oh Darling" from their "Abbey Road" album! It'll turn up on the Billy Fury site some time next year - though it may be as far as March before I've a chance! There's a waiting list of songs.

Next month should be good as the artists are sending in two tracks for Christmas. Ours have been especially recorded and are the Greg Lake "I Believe In Father Christmas" and David Essex's "A Winter's Tale" both of which sound quite nice to my ears, but I'll let you be the true judges next month!
Posted by John Burke at 21:28