Sunday, 6 June 1982. We walked down to Blackpool Airport to the Steam and Transport day. Stand by for traction engines and fairground organs galore! 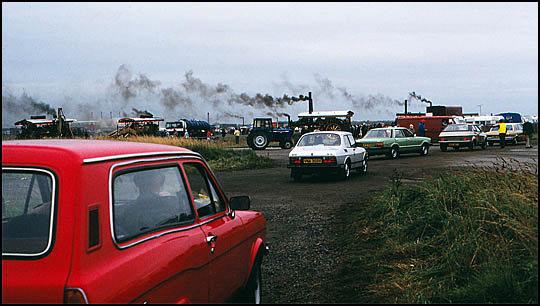 It wasn't the best of days as far as the weather was concerned, but the weather is never all that predictable in Blackpool anyway and can change ten times in as many minutes. The scene as we walked in alongside the steady stream of cars heading for the car parks. 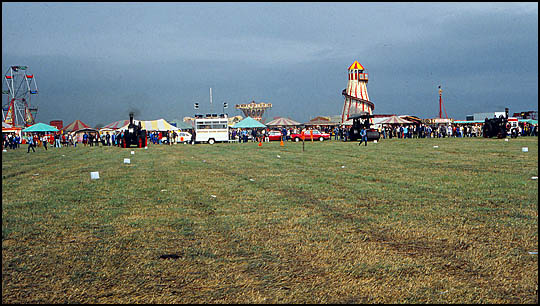 Visiting the site today, you could be forgiven for wondering where all these fields were, but at the time the terminal building was a lot smaller and the hotel and pub restaurant were not even thought of, so there was a lot more space than there would be in later years. 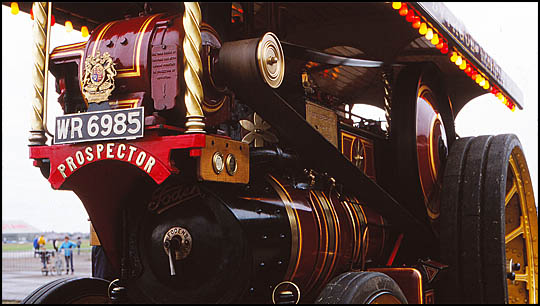 Prospector up close and personal. This is the last surviving showman's engine built by Foden. Dating from 1910 it was built for W Shaw & Sons of Sheffield and toured all over Yorkshire, hauling fairground rides and providing their power until 1939 when it was sold to someone for preservation. 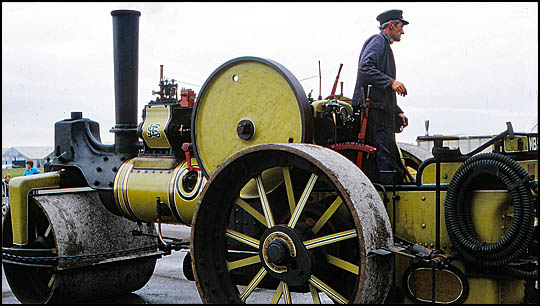 I can just about remember the last days of steam rollers, puffing away in the 1950s as hot tarmac was poured onto a road, followed by shovelfuls of grit, the resulting mixture then compressed by these leviathans to thin layers on top of previous layers to form a road. Feeling the earth shake as they went by and watching the hot steam rise from the newly-made surface. The clanking of chains and rollers as the steam roller was steered by the simple method of the steering wheel causing the chains at either side of the front roller to pull on one side of the axle whilst going slack on the other to allow it to swing. This is Cinderella - all these steam engines seemed to have a name as well as the registration (MB 5846) and a serial number (10906). It was made in 1924 by Aveling & Porter. DH 2482 Goliath was a traction engine commissioned by the War Department in 1917 and delivered the year after to pull artillery guns to the front in World War I. Made by J & H McLaren with 3 gears, serial no. 1623. Used after the war as a showman's engine. 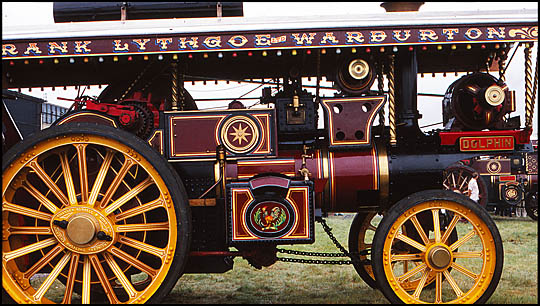 FA 2316 Dolphin the last showman's engine to be built by Charles Burrell & Sons Ltd at their Thetford factory in 1925. Serial no.4030, she had 3 gears and passed through several owners before becoming bogged down in a field and finally rescued for preservation. 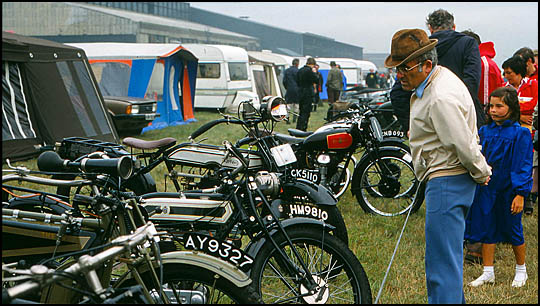 A display of vintage motorcycles standing in a row. 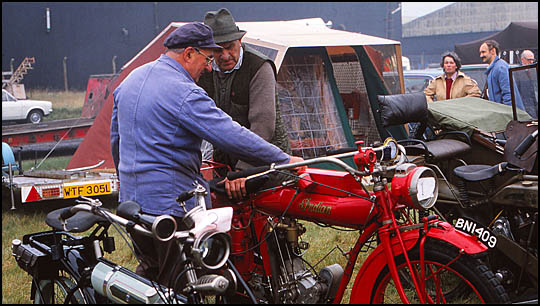 An early (1920s?) Indian motorcycle from the famous American manufacturer. Unfortunately I've been unable to ascertain the exact model. Usually if a vehicle of this age is still in existence you can google the make and registration number and find out the required details, but in this case I drew a blank. If anyone knows more, please leave a comment. 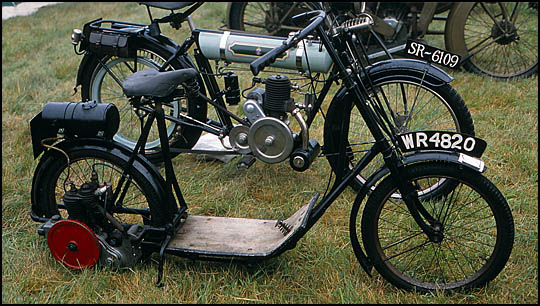 An early motor scooter. I fared just as well with this as I did with the Indian above. There is a Mrs W.R. something or other that lives at No. 4820 of her road in Maine USA... 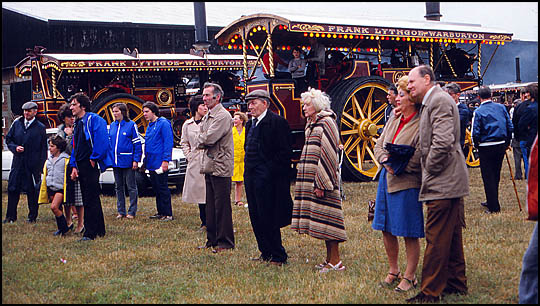 The other big draw to the day for me was the reason for this gathering of folks whose attention has been gathered so fully... 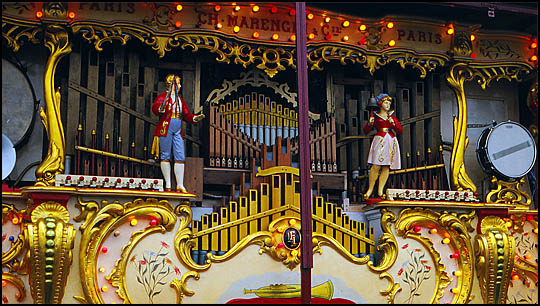 There was a good collection of fairground organs at the show! 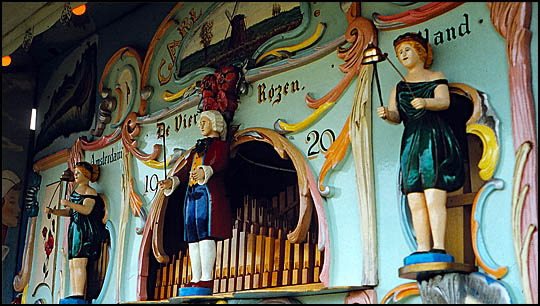 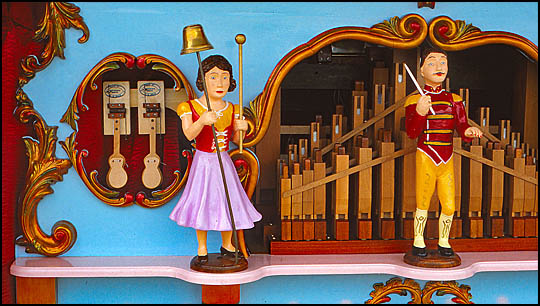 Almost all with animated figures. Some with percussive instruments like castanets all the way up to sets of drums and glockenspiels. 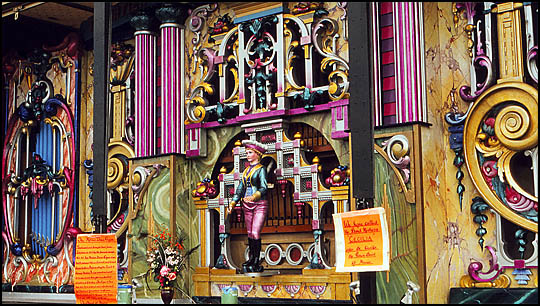 The largest of them had all of these things; full sets of both wooden and metal pipes and auxiliary instruments too. 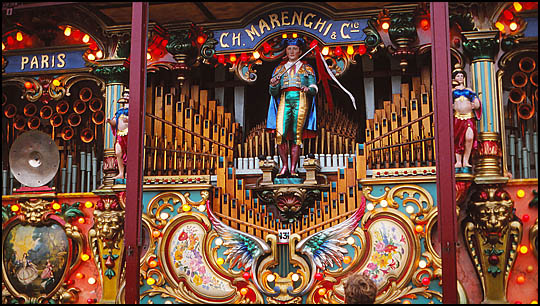 I had taken a tape cassette recorder with me and still have a set of recordings made on this day of the different organs. Plus some of the sounds of the steam engines and noises of the fair. It was the start of an ongoing family joke, where I used to take a small cassette recorder on holiday and capture sounds of sea and events and family. I christened it Captain Slog from the Star Trek phrase: "Captain's Log..."