A look at some of the Roman amphitheatres that we have had the privilege of seeing during the course of holidays over the years. 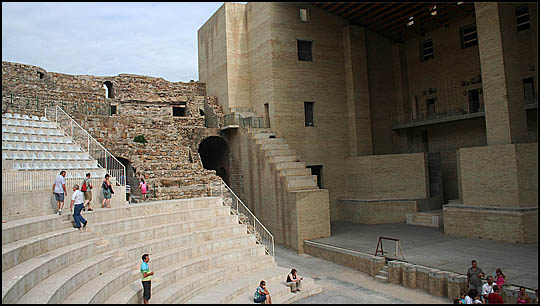 We start in Sagunto, Spain. It sits near the coastal port of Valencia. The shocking thing about this particular Roman amphitheatre was that the locals had rebuilt it. Not particularly to look exactly as the Roman original would have done... 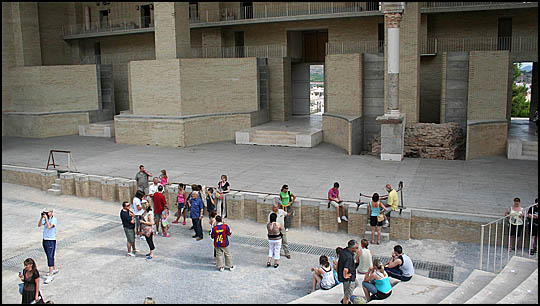 "Ah, well, it is illegal of course," our guide told us. "The architects have been told to dismantle all the restoration work next January..." Well that was 2007 and I believe it still looks this way. Sometimes I feel that a bit of restoration wouldn't go amiss to give the vistor an idea of what it may have been like in its heyday. But restoration is the key - not a modern brick wall just stuck onto a few original stones. 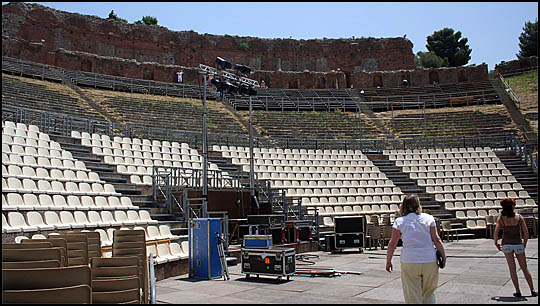 Taormina in Sicily. Equally as spectacular for the view along the coast to Mount Etna, which was puffing smoke out at the time. 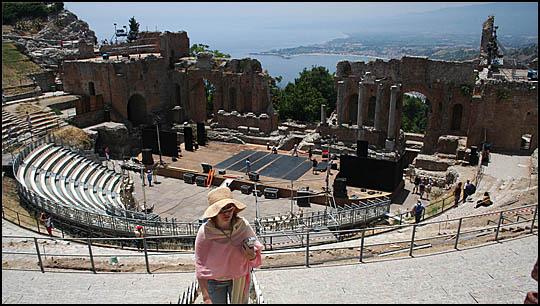 It is described as a Greek amphitheatre, but is built mainly in brick which suggests that the Romans built over an earlier Greek theatre. Here the back wall of the stage is original - and a very rare thing. 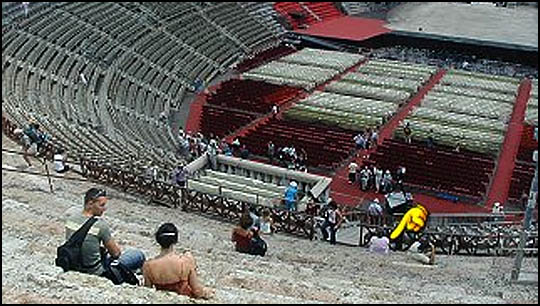 Verona, Italy. This arena held 30,000 spectators in Roman times, though the current set-up with the stage area has reduced this to 15,000 for current visitors who go to watch opera more than death and destruction. Oh... no wait a bit... The yellow finger points out Miss Franny who decided she wasn't climbing all the way up just to watch me take a picture... 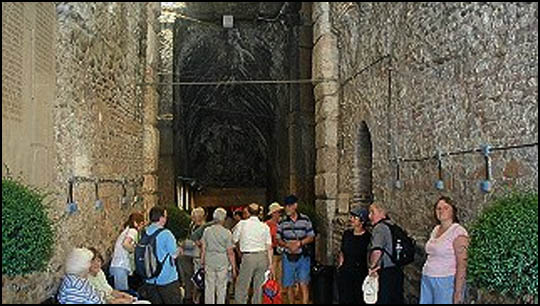 Here we went into the arena where the rocky ceiling above us shows how sophisticated the construction was in the days when lions rather than the odd off-key note brought about the death and mayhem. 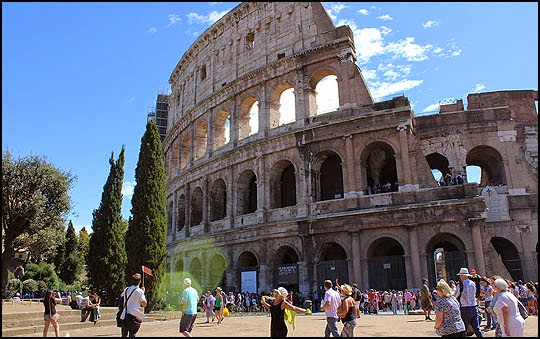 The Coliseum (or Colosseum) of Rome, built 70-80 AD and the largest Roman amphitheatre in the world. It could hold between 50,000 and 80,000 people and was the site of games, gladiatorial combat, executions and re-enactments of Roman battles (complete with actual slaughter...). 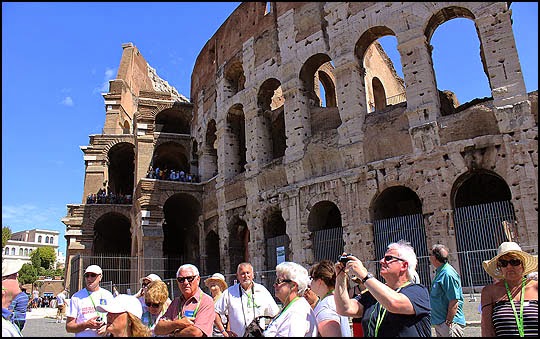 It is one of the most instantly recognised of any building on the planet and receives millions of visitors every year. Unfortunately the one-day tour we were on during a cruise didn't have time to go inside. 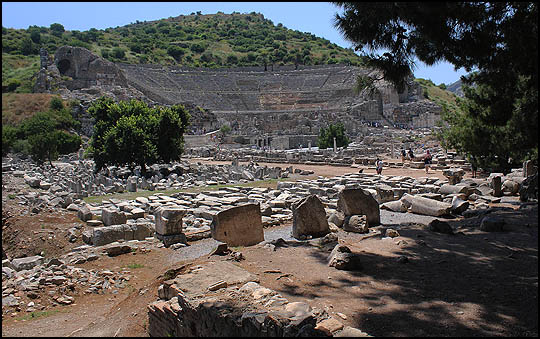 The Great Theatre of Ephesus in Turkey was first constructed in the Hellenistic Period, in the third century BC during the reign of Lysimachos. Once the Romans arrived it was enlarged and formed its current style as seen today. It seats 25,000. The Apostles St John and St Paul both preached here, sparking off the Riot of the Silversmiths, who made their living making and selling silver representations of their goddess Artemis. The ruins of her temple, one of the original Seven Wonders of the World, lie scattered across a field a short distance away. 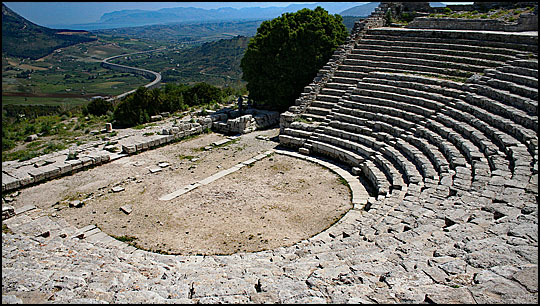 The amphitheatre of Segesta, Sicily. The back wall of the stage is completely gone and the result is an amazing view for miles with the sea flowing into a bay on the horizon and the road from Trapani to Palermo, snaking in an elegant S-bend whilst elevated from the ground on pillars. 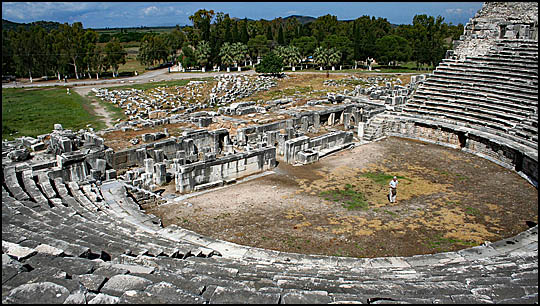 Miletus is not far from Ephesus in Turkey and was a major trading city in ancient times. This was where goods from Asia were bought and from where the great caravans set out south and west across the Holy Land and Greece then west to Italy and Western Europe. The theatre held a crowd of 15,000 spectators. The four columns would have supported a canopy for the rich folks to keep dry and be sheltered from the sun and flying limbs from defeated gladiators. 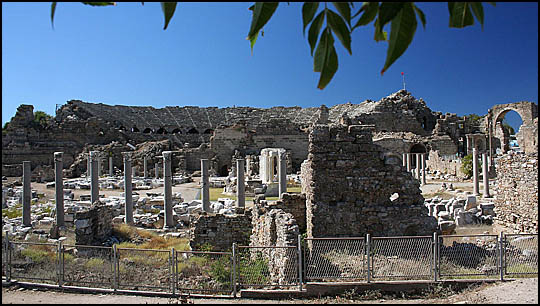 Once again in Turkey, this is the amphitheatre at Side (pronounced "see-day"). We approached from round the back and then found we couldn't get in because they only accepted Turkish Lira and I was carrying Euros which were ok in most of the shops. They also didn't take credit cards. However as we walked on, we found the ruins of a Temple to Dionysus (the Greek equivalent to the Roman Bacchus - the drink-loving god) and once past that we turned to see a perfect view of both the temple remains and amphitheatre. Again it held 15,000 spectators.