Saturday, 18 May 2019. We arrive in Livorno to find dark skies and teeming rain. We have brought no coats. We are booked on a boat trip around the canals of Livorno. We are at the back of the queue which means everyone else gets under the awning... 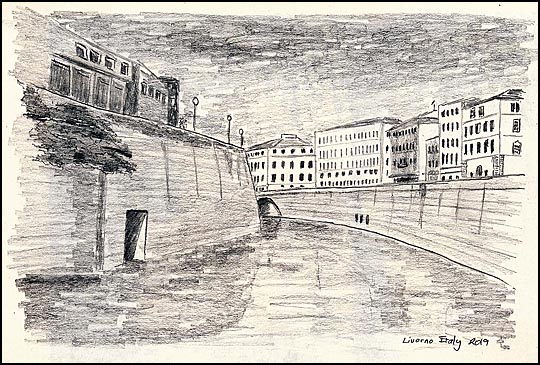 It was raining far too hard to think of taking photos. The tour guide (under the canopy) held up a few packets of polythene raincoats and looked directly at us. "We have some rain jackets for sale..." We're from Blackpool. We won't dissolve. I drew the sketch once we got home from a photo taken on a previous visit. I left a few boats out that were tied up along the side but otherwise this gives you an idea of the view, if not of the rain. 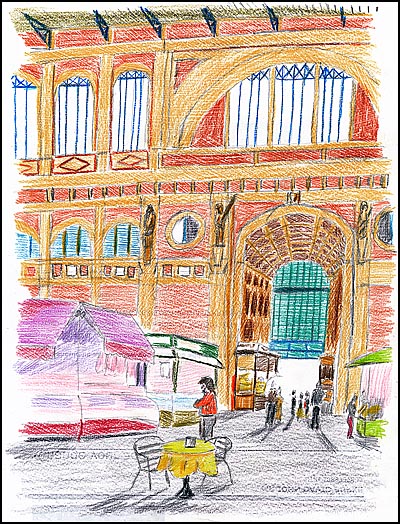 After the boat ride we squelched towards a large building that we recognised again from a previous visit. This is the indoor market of Livorno. The Mercato delle Vettovaglie, as it is known locally, is a huge building which dates from the late 1800s and houses 34 shops and some 230 stalls, primarily selling food but with a few craft or gift stalls here and there. You will find butchers' stalls with beef hind quarters and rows of rabbits hanging, fresh fish stalls, cheese and dairy stalls, wine, biscuits, sweets... There's lots to see and smell! It was crowded. Apart from the usual clientele just about every tourist in Livorno was sheltering in there! We managed to bag a table at a cafe stall and had our beloved latte machiatto - the same size as a small latte over here in the UK but costing less than two euros each! Again, the sketch was done at home. Last night in fact... 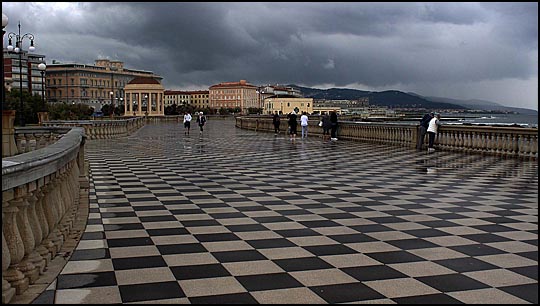 Finally our morning excursion was taking us to "the seaside". It had almost stopped raining by now but, as you can see, the weather was not promising to be good quite yet! To get to this checkerboard promenade we have had to wade a bit through puddles and standing water. 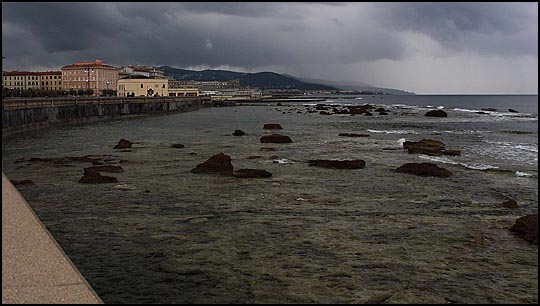 I thought I'd spotted a shortcut by going into the aquarium and out the far end of the reception area, but the rear doors opened onto a large flooded area and there would have been no hopping across that particular puddle! 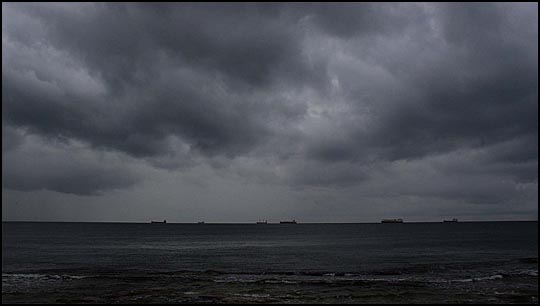 It looked no brighter out to sea, where a handful of ships were heading towards the industrial port of Livorno.

Return to Cruise Index
Posted by John Burke at 09:31