Fire and Ice: An Easy Day in Isafjord

Friday 4 August 2017. During the night that was stubbornly light, we arrived at the jutting out north west corner of Iceland and slipped down a fjord to Isafjord ("Ísafjörður" in Icelandic). 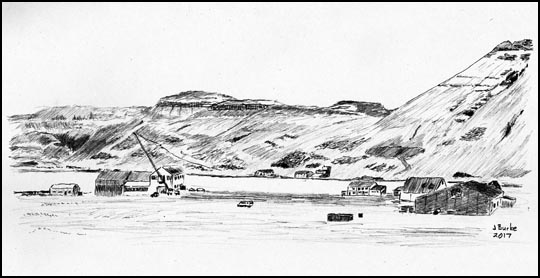 This was drawn from the Celebration's coffee shop on Deck 5. We waited for things to warm up a bit as first thing in the morning there was a - shall we say - a slight nip to the air... By the time we covered up with hoodies and jackets though we ended up carrying them round as the temperature shot up to 23 degrees centigrade! 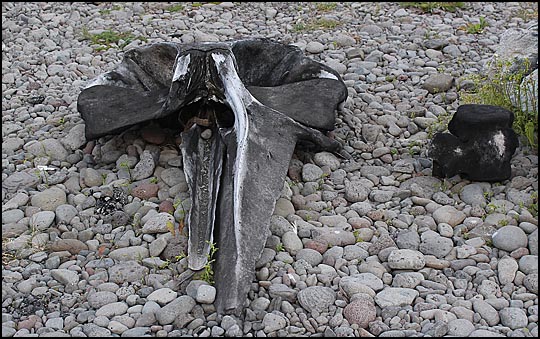 A whale skull and vertebra displayed on the ground near a souvenir shop and cafe. Isafjord was founded by Norsemen in the 800s and 800 years later apparently there were lots of witch trials around here, with anyone found guilty banished to an exposed peninsula nearby, now a national nature reserve. 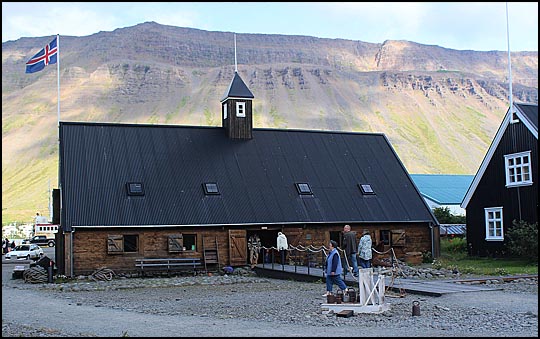 The cafe/souvenir shop was a large wooden building. A couple of cats were sitting or wandering around outside, looking hopeful... It was perhaps their home or a source of the odd tit-bit! 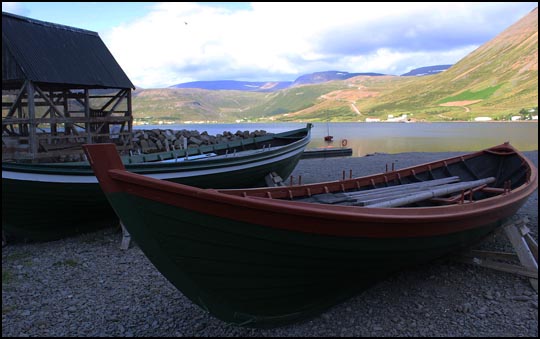 Behind us is the ship and then a high cliff at the far side of the fjord so we were in the shadow of the cliff whilst the entrance to the inner harbour and the hillside behind the hut is lit by the sun. 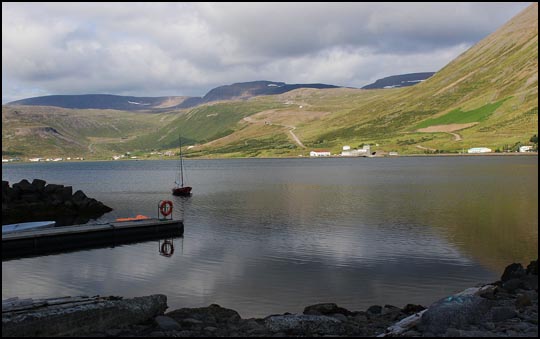 We had decided not to do any excursion today as tomorrow's excursion will be a long full day trip. So we set off to walk around Isafjord itself. 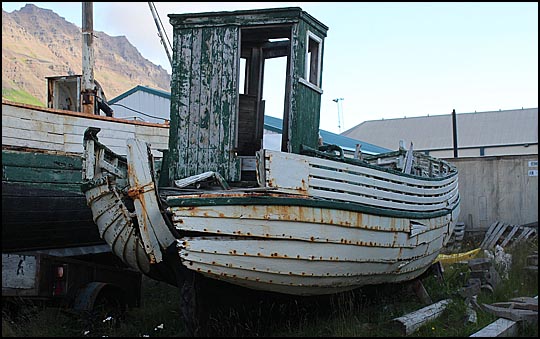 This boat had seen better days, but it looked as though any useful parts had been stripped off to extend their useful life on other vessels. 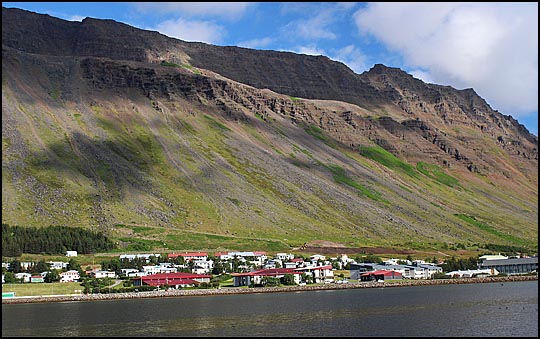 The fjord approaches and passes Isafjord and then does two right-angle bends to the right finally ending in a sheltered inner harbour. We are approaching that here, walking by the edge of the water. 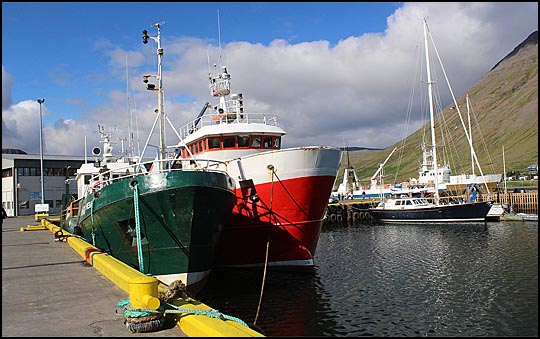 A few trawlers were in the harbour, perhaps having unloaded their catch and waiting for their next trip. A large green forklift truck was kept busy taking stacks of crates from the harbour into town. 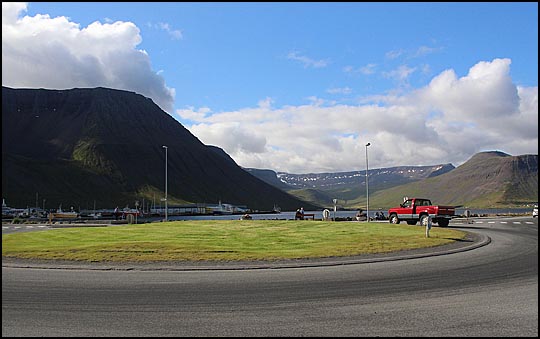 Isafjord's only roundabout. It covers approaches from the small town centre, from the dock and from the houses that strung along the side of the fjord on the far side of the town. 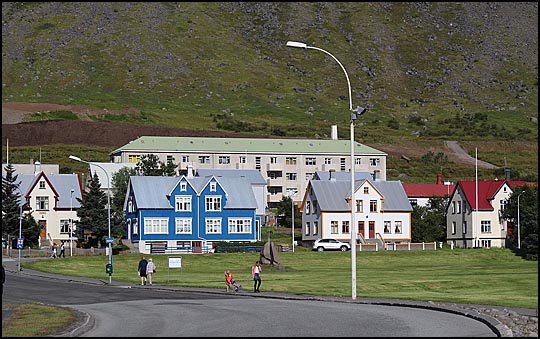 The houses were quite colourful! A large house, standing on its own, turned out to be a former hospital and is now a cultural centre with a library and museum. 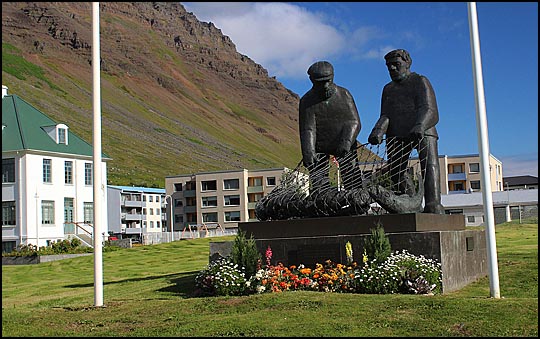 Like most fishing towns, there was a memorial to local fishermen that had set out but had not returned. This one was flanked by two flag poles and had a colourful flower bed set in front of it. 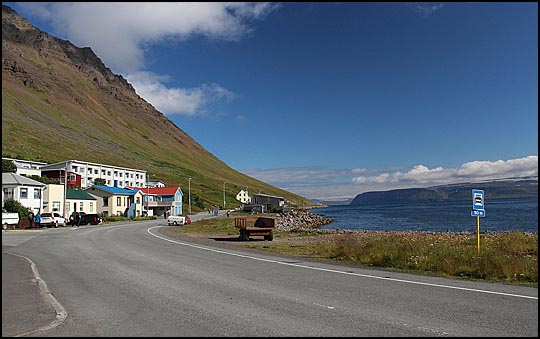 From the roundabout we turned to our right which led via a short street to the edge of the wider fjord at the end of the town. By now we were carrying coats and hoodies and were just in t-shirts. This in a place where the average mean temperature for an August day in just 9 degrees, with the average high being a mere 12 degrees. It's hard to deny global warming here... 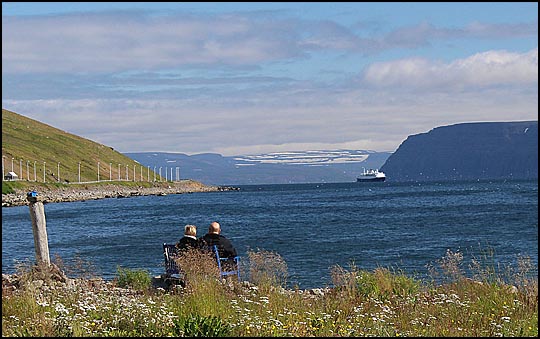 There were quite a few of our fellow passengers enjoying the views from here. There is snow on some of the slopes despite today's high temperatures. We were told that we had been incredibly lucky with the weather as it had been raining hard and cold the previous day. In fact we heard that in most of the ports we visited - I want to travel with this captain again...!

Another cruise ship is approaching Isafjord in the distance. This is the Astoria, belonging to a Portuguese line. We'll have a closer look at her as we sail out. 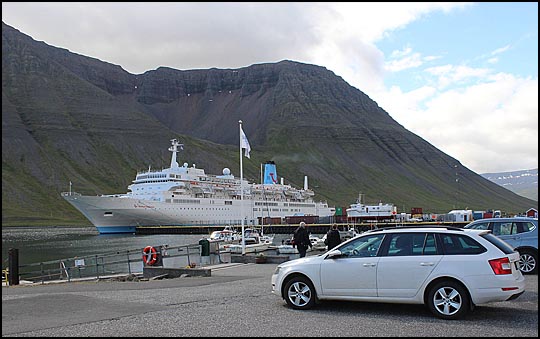 We walked through the small town centre, coming back out to the fjord and our own ship waiting patiently against the dramatic backdrop of the side of the fjord. There's a few specks of snow up there too, proving that today's warmth was truly a bit of a freak luck! 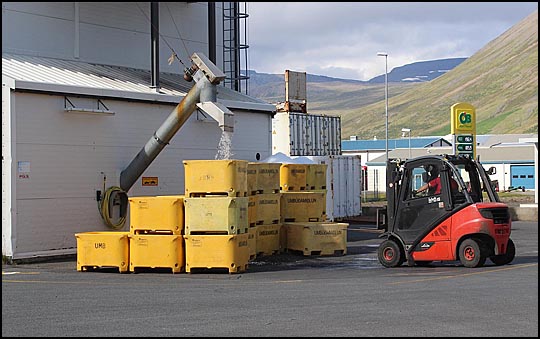 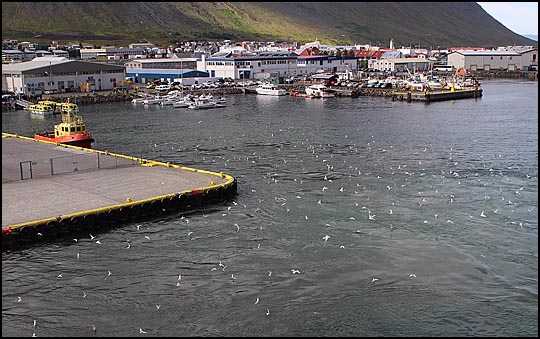 The day passes. At 5:00pm we cast off our cables. The gulls gather excitedly as the ship's thrusters move us out and away from the dock, stirring up tasty morsels no doubt from the below. 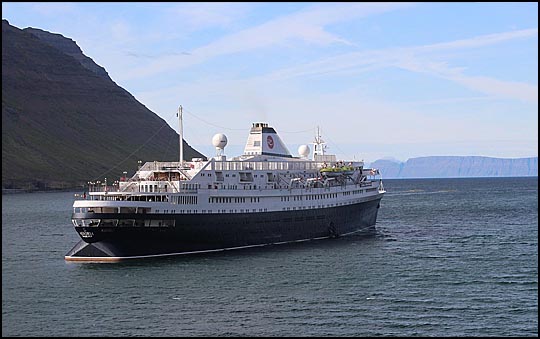 The Astoria. She's an old girl. Built as the Stockholm in 1948, Astoria is incredibly the eleventh name she has sailed under! Built originally as an ocean liner, she currently sails as a cruise ship carrying 556 passengers.

We are now on our way to our final port in Iceland, Reykjavik. Whilst not exactly "fire", the trip we take tomorrow will include some impressive volcanic and geothermal action! And a rather expensive (but very good) beer...

Back to the Cruise Index Page
Posted by John Burke at 11:33