Tuesday - Thursday 1-3 August 2017. After leaving Stavanger in Norway we have two days at sea to look forward to. Stavanger is our last chance to see darkness for a few days too as from now until we reach this latitude again in almost a week, it will remain light all the way through the night, though we will not venture far enough north to see the midnight sun. 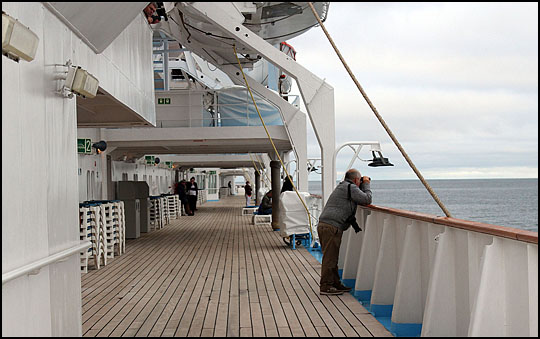 We will be crossing the Arctic Circle though, as we are going to sail all the way round Iceland. Our first stop in that country will be at Akureyri which is reached down a fjord from the far north of Iceland.

Meanwhile temperatures drop as we head north. We dutifully trog round the Promenade Deck to keep the legs going - though we tend to use the staircases anyway more than the lifts and with going up to and down from the cabins several times a day means climbing three or four decks to the main deck or restaurant. I will come home 3lbs lighter than when I left! No mean feat with all the food that is available! 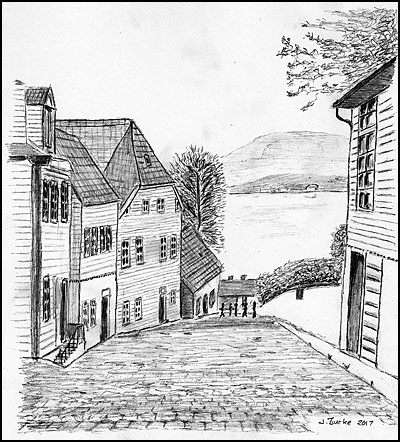 I spent part of the time drawing this from a photograph of Bergen in the cruise brochure. There was plenty going on around us. In the mornings and early afternoon the show team, recently transferred from Thomson Majesty spent time warming up and rehearsing, working out the choreography of their shows on the dimensions of an unfamiliar stage. In the late afternoon a guest speaker, film producer, actor and critic, Tony Sloman, gave a series of lectures, one for each day at sea on the history of films of different genres. We missed the first one which was about musicals, but caught his other talks about Westerns, Gangster Films, Car Movies, and Film Noir. His talks were illustrated by some great clips and old trailers. 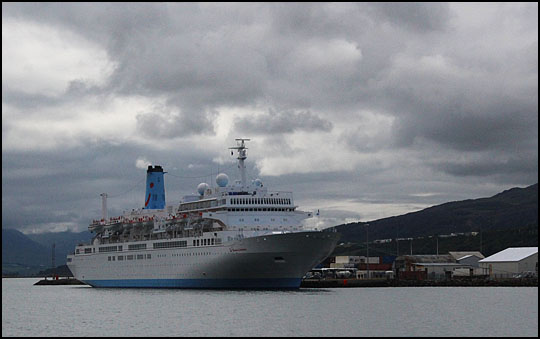 As we awoke on Thursday morning 3 August, we were making our approach to Akureyri ("ak-you-ray-rie" with the accent on the first and third syllables). 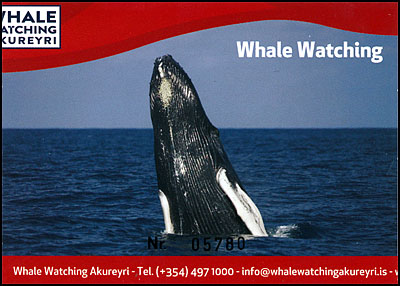 After breakfast we transferred to a much smaller boat for a spell of whale watching in the fjord. Humpbacks, dolphins and porpoises, minke and even the giant sperm and blue whales have been seen here so we were all excited and raring to go! 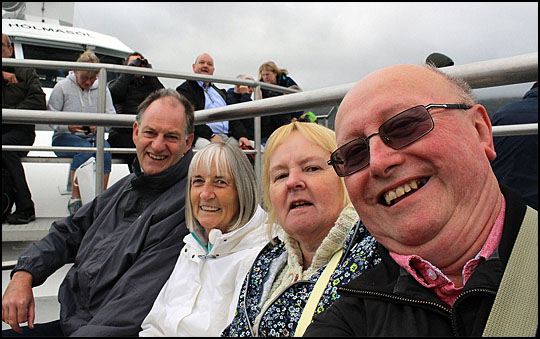 John and Sue joined us on this trip - the only one we managed to do together as on another trip we were all booked on, they had a different set-off time and did the tour in reverse to ourselves. I don't feel the cold usually but here I am wearing a t-shirt, shirt, a knitted arran cardigan (knitted by Fran I might add!) and waterproof jacket and still ended up shivering with cold! 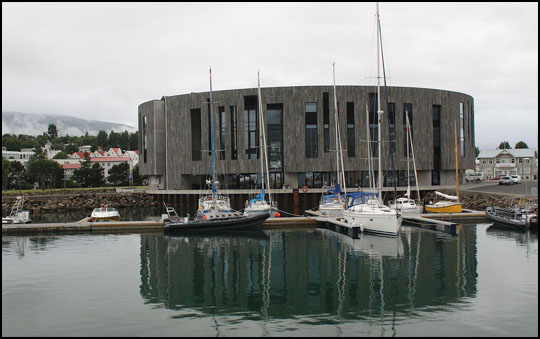 We manage to get on the front corner of the boat and hope that any whales are on our side! As we leave the harbour, the round building is the Hof Cultural and Conference Centre. 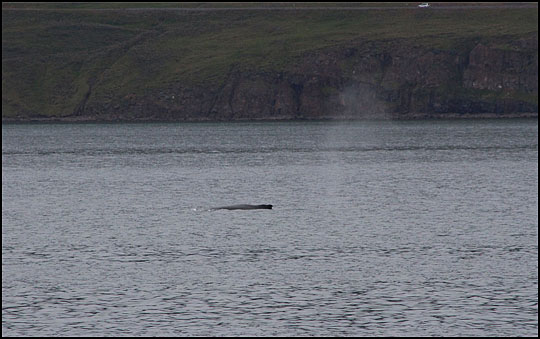 We have not been going down the fjord long when the spotter, Anouk, announces that she has seen a blow from a whale's breath. This is our first sight of it - a humpback whale around a hundred yards out. The slight mist behind it is the remains of its blow. 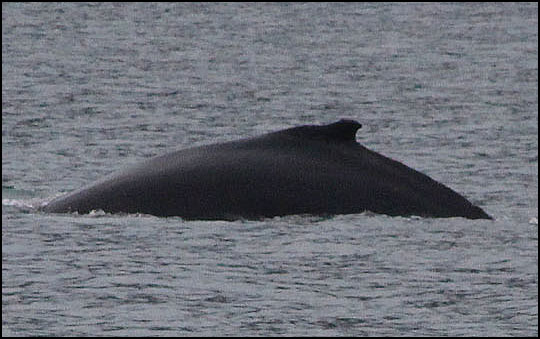 The whale was not feeding and so there were no dramatic vertical breachings, but instead it was heading down the fjord towards open sea, coming up for three or four breaths before arching its back and diving upon which we would have to wait between five and ten minutes for it to re-appear. By which time it could be quite a distance away again! 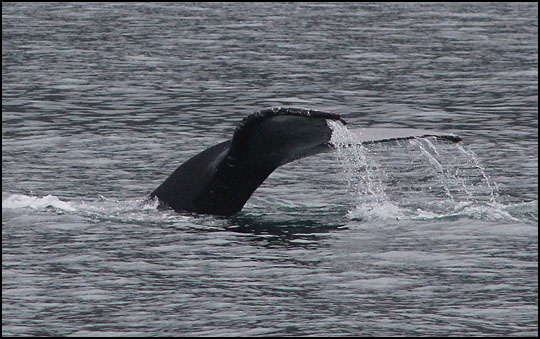 The back arches prior to the whale diving. As it dives, the tail flukes curve out of the water in the classic view. 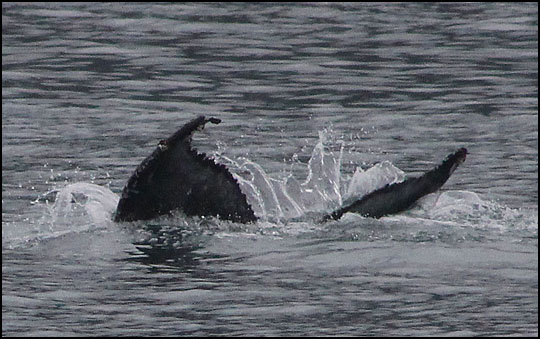 The shape of the tail flukes are a major factor in identifying individual animals. Shape, injuries, crustacean growths and colour all play a part in helping identifying the whales. 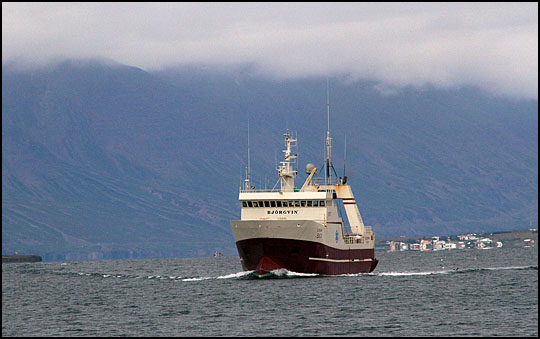 We leave the whale alone and head down the fjord, but without seeing any whales. The Björgvin is a stern trawler, built in 1988. 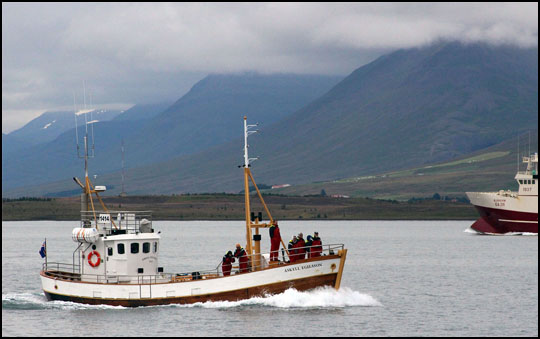 We are not the only whale-watching expedition out in the fjord. In fact it was this boat that found our next whale, though they kept the closest views for themselves. 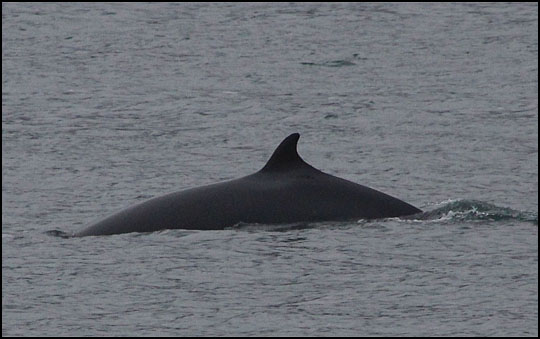 It was a minke whale, one of the smaller whale species and a rarer visitor to these waters. This just skimmed the surface, the tail flukes of this species do not break the water's surface as it dives. 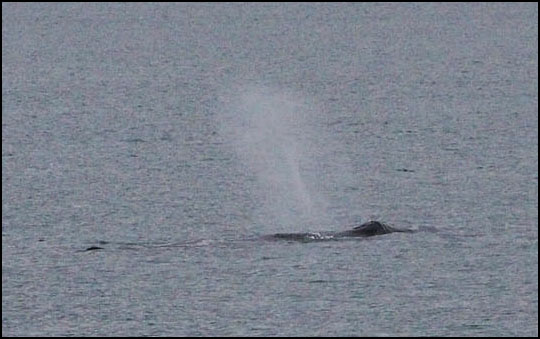 Then as we headed back to Akureyri again, one last sighting of another humpback whale. The blow comes as soon as the animal breaks the surface and as you cannot predict where they will be I was particularly chuffed with this photo! 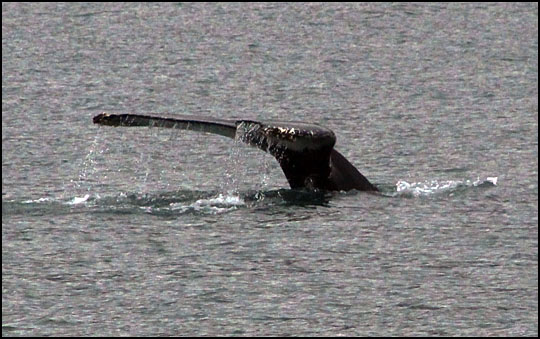 Was it the same whale that we had seen before? We were roughly in the same area of the fjord. 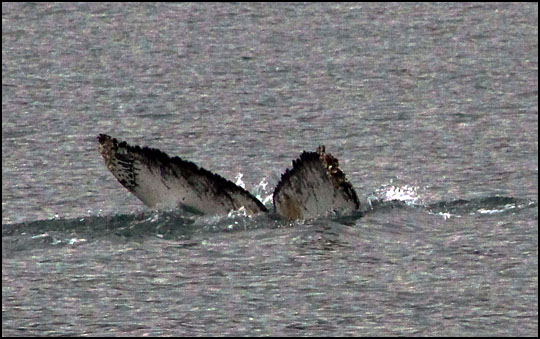 But the tail flukes have a distinctive white marking. This is definitely not the same whale as our first sighting. 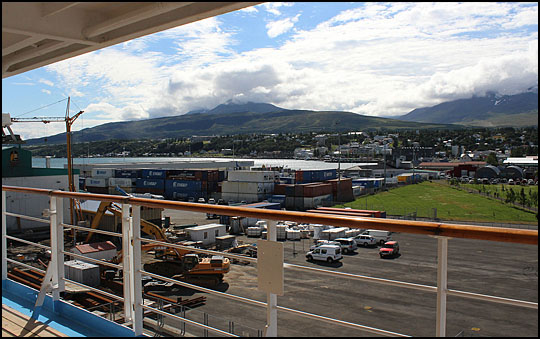 By the time we reach Akureyri again we are shivering with cold but once back on the ship the sun makes an appearance. It remains very cold though. Fran stays inside the ship whilst I literally dash around the Promenade Deck to take photos of Akureyri. Yes, that is snow on the hill, top right... 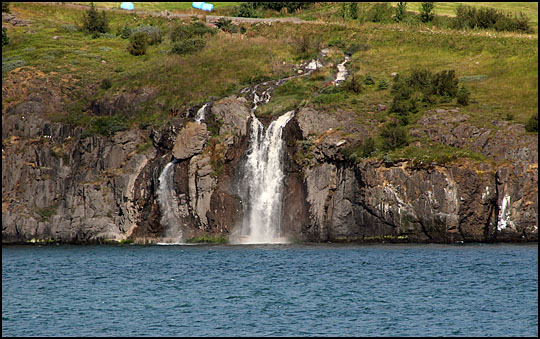 On the opposite side of the ship, a waterfall flows over the cliffs. 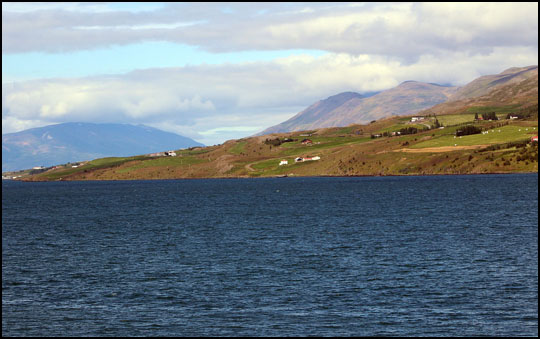 Looking down the fjord. The cold gets the better of me and by the time sail away time comes round I am back inside the ship and heading for the coffee machine! As we have our evening meal by the windows of the restaurant we see two plumes of spray rise up about a hundred yards to our side. More whales, but they remain hidden by the waves.

Back to the Cruise Index Page
Posted by John Burke at 17:22