Phew - it's been one of those weeks out on the road eating up miles and not getting much chance to sort out photos or thoughts!

So let's go back just over a week to last Friday and we piled everything in the trusty MPV and breathed a sigh of relief as we considered that, had it had rafters, it would be full to them!

We were taking our full set of gear down this time so with PA and speakers, keyboard and guitar, gig bag, stands and luggage and four people, we zoomed off down the motorway, stopping at every second services - drat these pills...

The hotel we've used the last two years is now a Travelodge and a communal breakfast-free area so we were staying at the Sunley Conference Centre of Northampton University, who were providing a large room for the Friday night jam session.

Lots of familiar faces there from years past and also some new ones. Some that I knew from the Billy Fury forum but had never met. 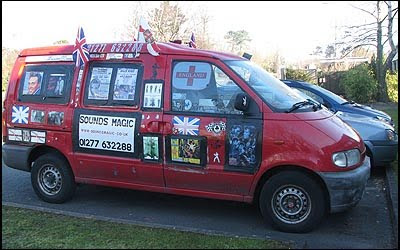 In fact the first thing we saw was the Danmobile! Daniel Heeney, is a long-standing member of the billyfury.com forums but it was our first meeting. "Long-standing" suits him - he's a tall fella! And I loved his act on Friday night!

Cathy and Jean were on hand to give me my first cuddles, Katie, Marie and Jan hadn't been able to make it alas! Likewise a few others but there was a good crowd of us. The Furygirls' favourite, Johnny Storm was there to wow them with his voice. Miss Franny came over all accusingly at me because he did one of her favourite Michael Bolton songs - er... yes, it's a while since we've done that one I know... 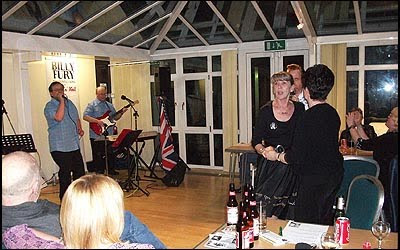 MC, the fabulous Rob Dee called us up. Creeping Bentgrass took to the stage area and we set off with a Billy song - Like I've Never Been Gone, one of my favourites! 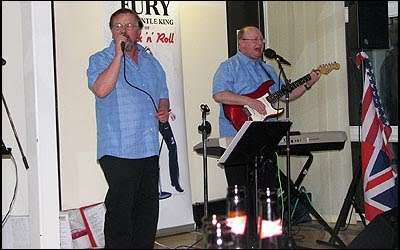 We had a bit of help with Johnny B Goode (below) - he can be a bit of a handful that one! 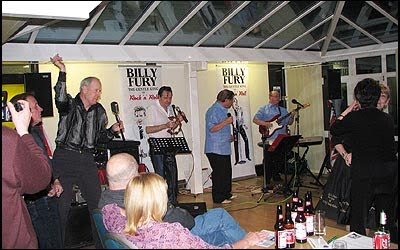 And at the end of the night we were surprised but very honoured to be asked back to play a live backing for all the performers from the night to sing Billy's best known hit, Halfway to Paradise.

Saturday night report to come...
Posted by John Burke at 18:41