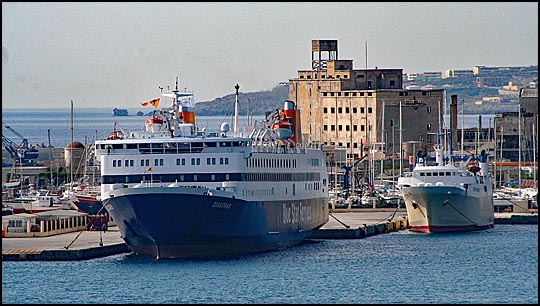 This is another of the sites of one of the Seven Wonders of the Ancient World. The Colossus of Rhodes was a giant statue of the god Helios. He held a bow in one hand, a torch in the other and straddled the entrance to the harbour, with a foot on either side so that ships had to pass between his legs. He had an expression that said "Mind that mast! MIND THAT MAST!!!" 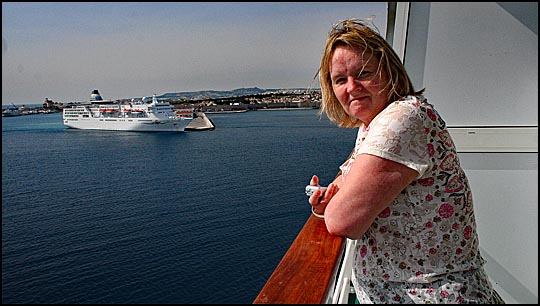 The statue was built of iron and brass between 292 BC and 280 BC and survived all of 56 years before an earthquake brought it tumbling, the statue breaking at the knees and then falling into pieces as it fell. I've used dates from Greek sources here as Wikipedia unhelpfully and somewhat confusingly says that it was built "between 304 and 293 BC, which took 12 years and was completed in 282 BC"...? There was no sign of it as we sailed in, perhaps just as well, as the statue would surely have closed its eyes and gulped at the sight of a mast standing 12 storeys tall... In fact the rubble stayed in the harbour, a hazard to shipping for an amazing 800 years before it was sold for scrap and taken away on the backs of 400 camels. 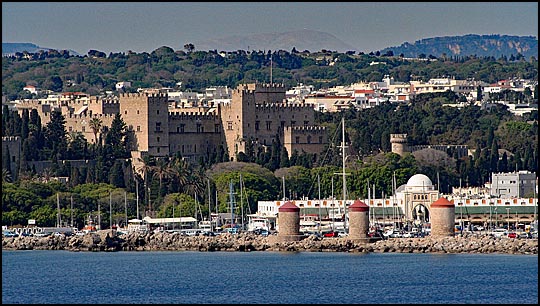 Even without a gigantic man's gigantic dangly bits dangling gigantically over our heads, the approach to Rhodes is impressive. The Knights Hospitallers came here to avoid the persecution of the Knights Templars in 1307 and built impressive defences which were to become the most solid Christian fortifications of their time. 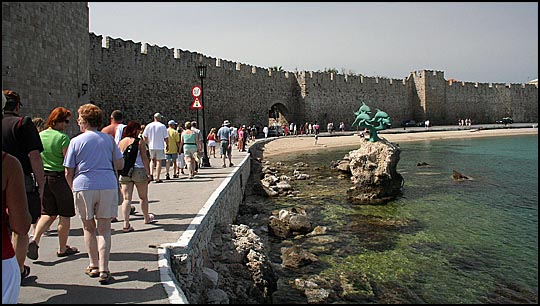 The city is only a short walk from the harbour and we had elected to make our own way again rather than book an excursion. We found ourselves in a procession of cruisers, skirting the city wall to a convenient gate into the streets of the city. 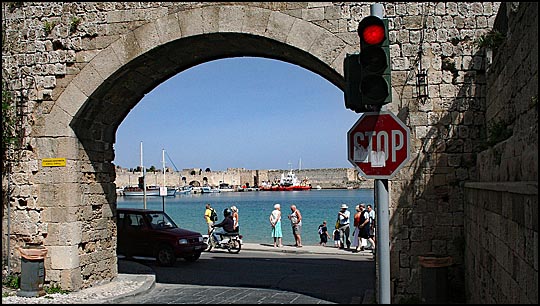 The medieval city is so well preserved it is a UNESCO World Heritage Site and justifiably so. 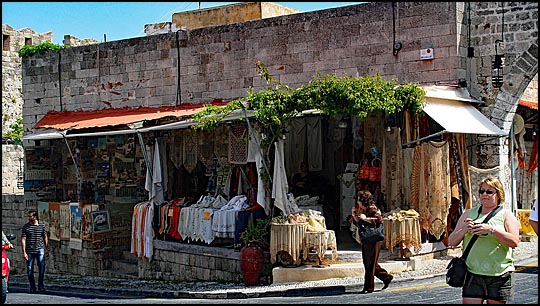 It was a joy to walk through the streets of the city, which are light, airy and interspersed with occasional piazzas, the greenery of trees and plenty of street cafes and bars where you can just sit and people watch with a glass of something cool or warm as to your taste. 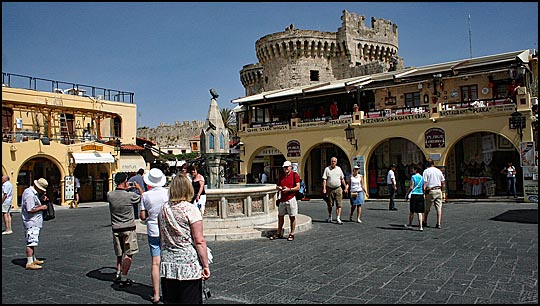 We are inside the city but the towers of one of the main gateways can be seen over the roofline of the Greek steak house that also offers pizza and spaghetti and all sorts of other traditional Greek fare... er… 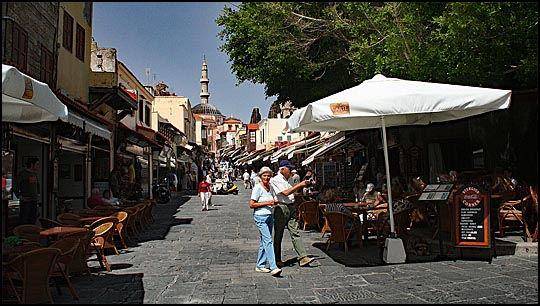 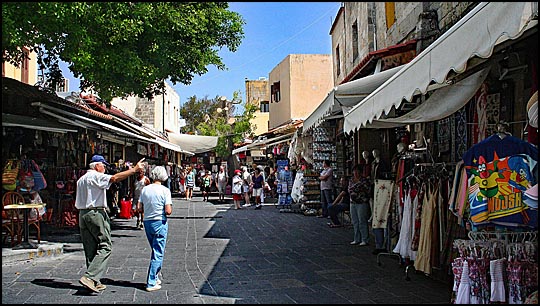 There were plenty of craftware on sale in shops from finely embroidered linen to leather goods (Fran as an ex-leatherworker can never resist stopping to just sniff in the rich aroma of leather - it's a fetish I've yet to exploit, but who knows...) 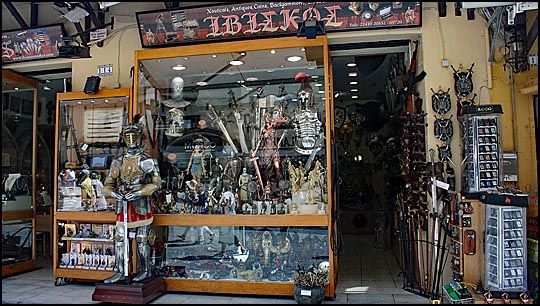 The connection with the Knights Hospitallers is acknowledged in the presence of several shops selling swords, armour and other goods that are likely to be confiscated by customs or ship's security personnel. 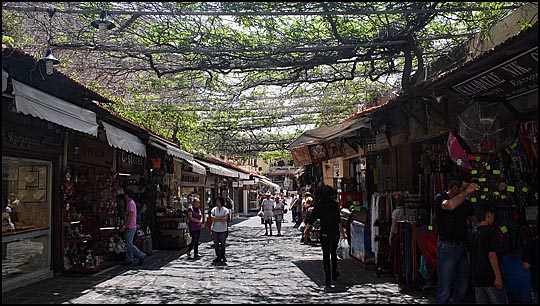 This was a very relaxed day and we had the luxury of not being tempted to try to see everything as there is another trip to the area in the offing later in the year and I want to go up to see the remains at the Acropolis of Rhodes then. 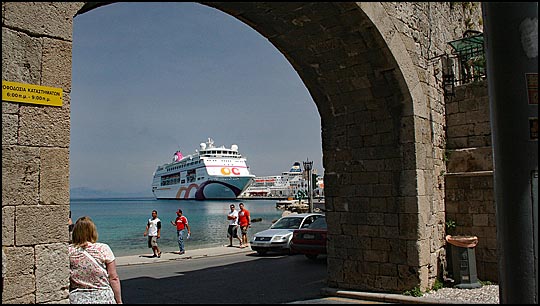 For now we retrace our steps back to the gate through the walls and stop to buy the inevitable fridge magnet (I can just about remember when the fridge was white...) 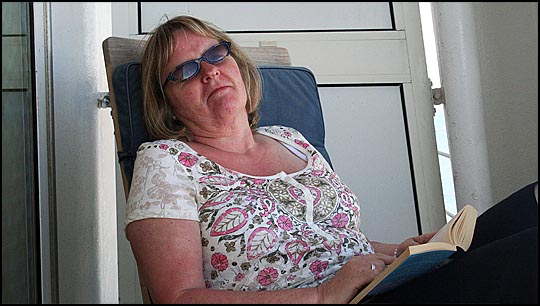 We sat on our balcony for the afternoon and I listened to music on my i-Pod before taking the headphones off and almost falling asleep. The thing that stopped me was the iPod slipping from my grasp and hitting my shin which deflected it to cleverly miss the railings of the balcony and shoot straight off the side of the ship... I grabbed the headphones at the last minute and somehow, unbelievably, the headphone plug didn't come out of the socket. I was a bit aghast with relief as I brought the i-Pod safely up and back onto the balcony! Otherwise someone on the dock below might have been brain damaged by music...

Return to Palace and Pyramids Index Page
Posted by John Burke at 11:25