Sheesh, me old kebab! There's a few memories going through the scanner at the moment from 1981. I was still taking mostly black and white photos at the time, which I processed and developed myself, blacking out the bathroom with thick plastic over the windows and getting giddy on the heady aroma of chemicals in which I sloshed prints about with gay abandon. 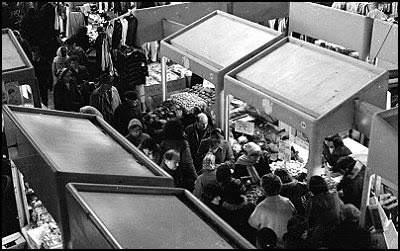 First offering today is this one of the then new market stalls in Rochdale. We came from Rochdale originally and whilst Fran's parents were still alive made fairly regular trips back to see them.

The market had recently moved from the bottom of Yorkshire Street to a new spot near the brand new indoor market and the council had provided these new stalls with rather garish plastic canopies in a choice of bright red or bright yellow. The locals hated them and quickly dubbed the new market Toytown! 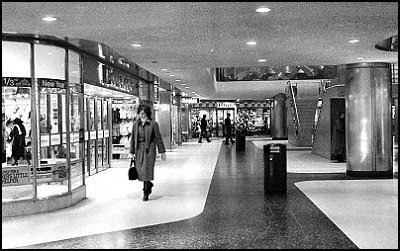 Meanwhile in Blackpool, this is a shot of the Hounds Hill shopping mall. It felt very futuristic at the time. Mothercare is the large shop on the left and had a front both in the mall and on Adelaide Street West (Adelaide Street having been cut into two portions by the development). 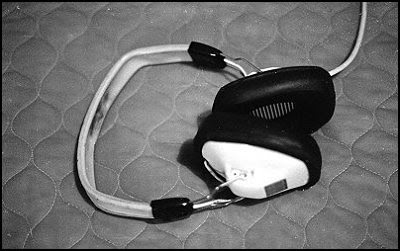 This was my first set of stereo headphones, in ivory plastic with brown foam pads. They were identical to the pair owned by a lad called Paul Fitton, who went to the same school as me and a mutual friend had introduced us way back in 1969. He played me several Moody Blues albums through the headphones and I was knocked out by the clarity of the sound and the stereo effect.

At the time Dad had a stereo set-up, but with a huge cinema speaker at one side whilst for the right hand channel the stereo valve amplifier was plugged into the large 1950s radio set. Not a good match... I bought the headphones and would spend many a night in my own world of Moody Blues, The Supremes and other stuff which would embarrass me greatly to reveal it now... My God, how could I... 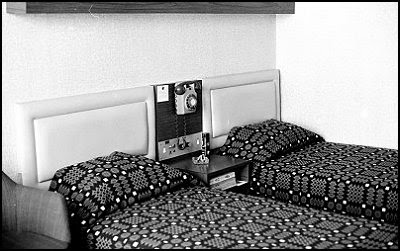 Finally a couple of shots from a trip to London at the very end of January 1981. This was the first time I had ever gone away for work, the first time after 5 years of married life that I'd spent a night separated from Fran and the first time I'd ever stayed in a large hotel.

Holidays were spent in the UK at that time and we always stayed in guest houses rather than hotels. This was an eye-opener and I remember feeling ridiculously impressed with the lavish richness of my surroundings! Even the experience of walking up to a Reception Desk was something I'd ever only seen in James Bond movies...

There was a telephone!!! In the room!!! Look at that natty 1970 wall-phone design too! Push buttons were still a definite luxury - and it wasn't that posh a hotel! I can't remember which hotel it was I'm afraid... 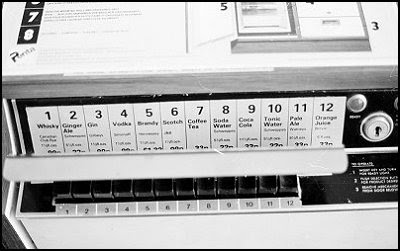 It did have a mini-bar though, although of course I had been warned not to use it as they were unbelievably expensive! Can you make out the prices in the photo? Wish you could find one in a hotel priced like that now?
Posted by John Burke at 11:33