Messing About On The River 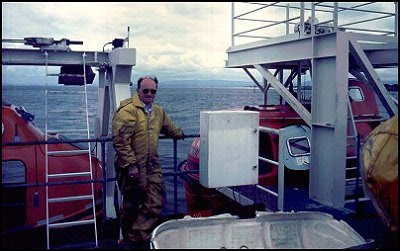 At that time I was working for Fleetwood Nautical College as its Registrar in the last year it existed as an independant college before its merger with Blackpool College at Christmas 1986.

They had (and still have) a working platform on the River Wyre at Fleetwood to train workers on oil and gas rigs in safety procedures for offshore workers. 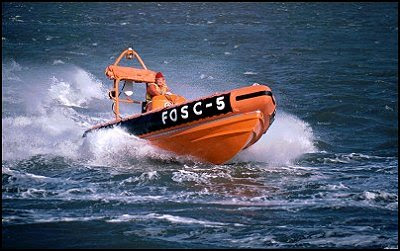 On the platform they had some brilliant bits of kit, including this jet-powered fast rescue craft designated FOSC-5. FOSC stood for Fleetwood Offshore Survival Centre.

Offshore workers had to undergo a 5-day survival course in order to be certified to work on a rig and had to undertake a 3-day refresher every 3 years. Not all of the equipment was as fast or glamourous as the fast rescue boat. There were enclosed lifeboats, including stranger shaped craft than this one. There was an almost circular one that pumped water from underneath and sprayed it down the sides of the craft - to cool down the sides of the thing whilst floating on a sea covered with burning oil.

Being almost circular, it bobbed about a bit! It was not a craft for those who were easily seasick! 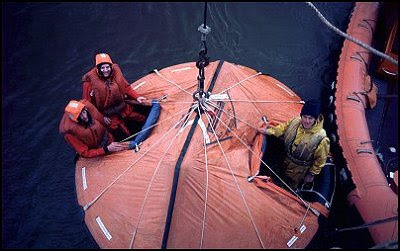 Part of the course involved jumping off the platform into the River Wyre and clambering into an enclosed inflatable life raft - a feat that took nerves and a lot of strength to clamber into the life raft!

Another exercise involved getting into a mock-up of a helicopter cabin which was filled with smoke and then dropped underwater and inverted before the "crew" could escape.