Tuesday, 23 August 2005. We have booked another excursion this to take us to the ancient devastated city of Pompeii. 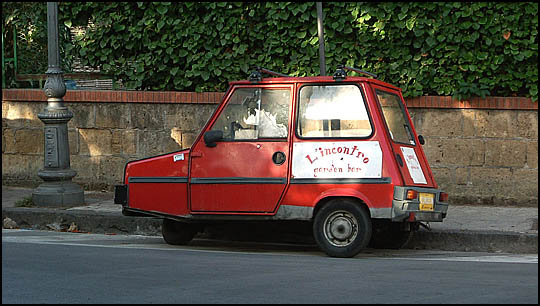 By gum, there's not much space on this coach... Oh, wait no, it's just a cheap way of advertising someone's restaurant! We've seen a few of these tiny three-wheelers about. Some of them have pick-up backs for deliveries or park workers etc. 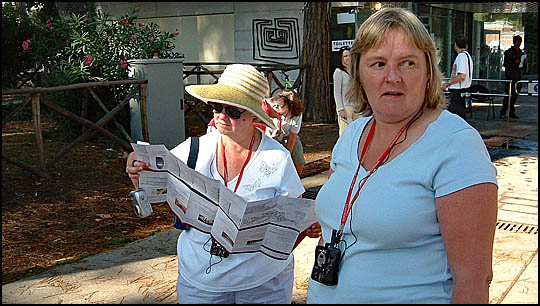 Roman Pompeii. There is much more of it than you would think - indeed the ticket office is still in fine shape... 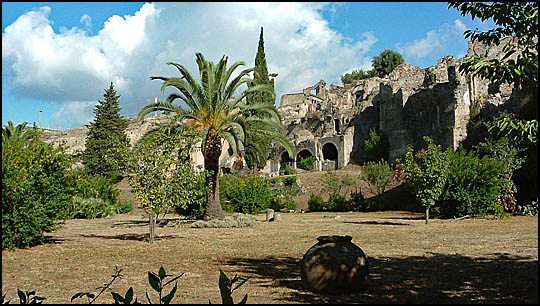 This is our first sight of Pompeii, immediately after passing through the entrance. We are given a set of earphones each and the guide talks into a radio that we can all hear. This is good in that we can all hear clearly - but if he's out of sight we have no idea which direction to go to find him! 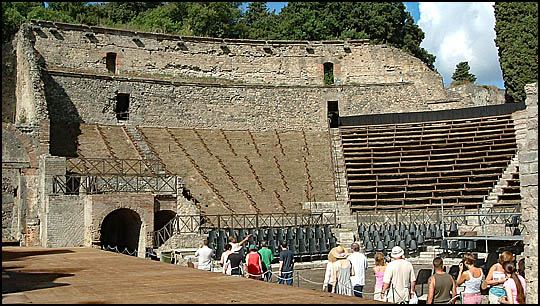 We set off all the same and first stop is a look at the amphitheatre. The band Pink Floyd filmed a short concert (6 songs) here in 1971, though the audience was limited to the film crew and some local children. 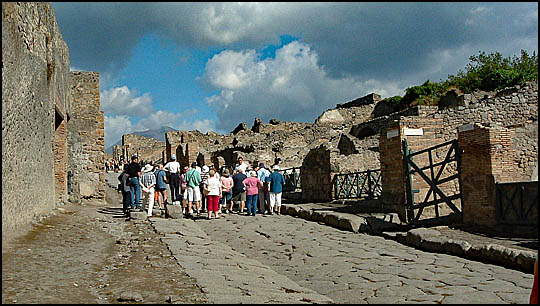 We hit the streets and now it starts to hit you about what happened here. Although these streets are 2000 years old, they look very familiar. A central roadway. Pavements to either side. Kerbstones. Recognisable ruins of buildings to either side... 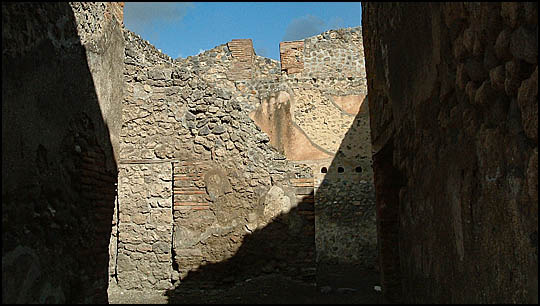 Inside the buildings are still traces of wall plaster and painted designs. Although the exposed stonework may look random and primitive, the brickwork is laid in courses exactly the same as it would be today. As regards the stonework, I have a sneaky feeling that the more random parts of the structure have been added at a later date, perhaps to keep the building from falling following exposure from the layers of ash and mud that covered it. 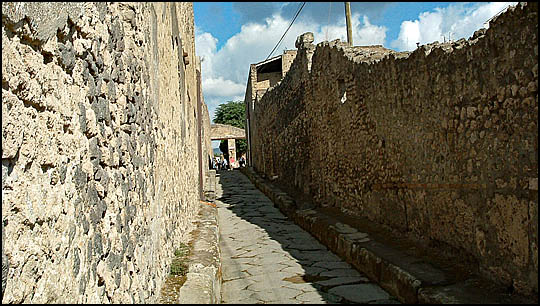 There is a mixture of wide streets and narrow alleys. 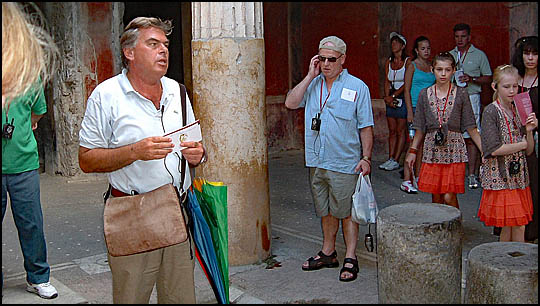 Our guide was quite good. Let's face it, here there is really only one date that matters, so he spoke more about the people, their way of living and the discoveries that have increased our knowledge about them, rather than any list of dates that would have sent me to sleep in no time. 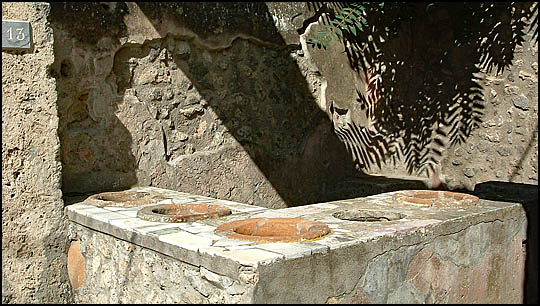 Most Roman towns, perhaps all of them, had several fast food outlets that sold such delights as dormice on sticks, locusts in aspic etc. This is one such, the salad bar of huge earthenware jars, surviving so that happy children could dip their locusts! 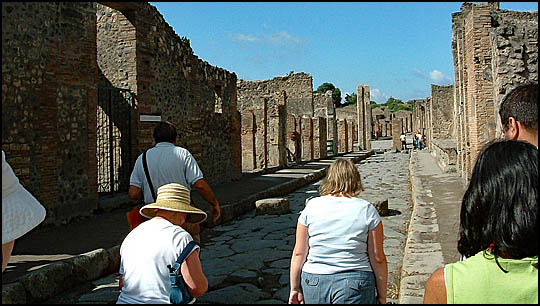 As I've said, walking along streets 2000 years old is humbling. Working on a generation every 25 years that's 80 generations away. If my ancestor had lived there it would have been my great, great, great, great, great, great, great, great... you're right - it doesn't bear thinking about! The huge chunks of stone in the middle of the road by the way allowed people to cross the street without wading through the filth of sewerage and rotting food. Well, perhaps there has been a bit of progress since then... 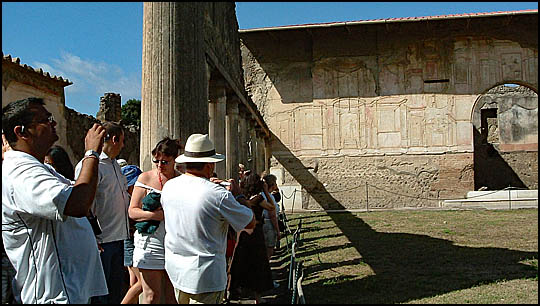 I'm very much afraid I can't remember what this building was, but it had a wealth of art, both painted and carved in relief on the walls. 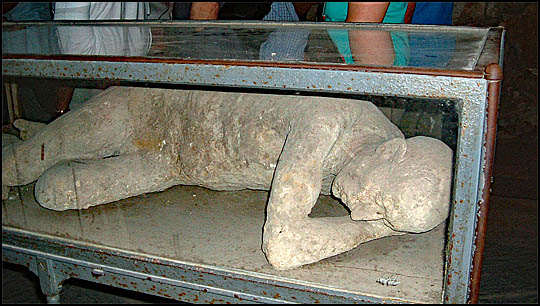 No matter how many times you have seen photos of the bodies, the actual sight of one makes you pause. The volcano's pyroclastic flows were so hot (around 250 degrees centigrade) that they would have killed people instantly even as they left the volcano and before the flow reached Pompeii. The hot ash then settled hardening into rock. As the bodies decayed into nothing, their impression was left inside. This is a plaster cast - not an actual petrified corpse. Even so, the first time you see one, your heart goes whumpf in shock and it makes you think what it may have been like for these poor people. 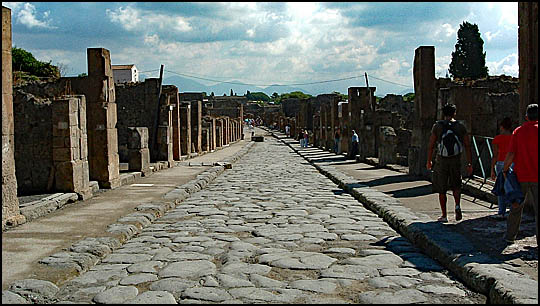 Via dell'Abbondanza, the main street in Pompeii. 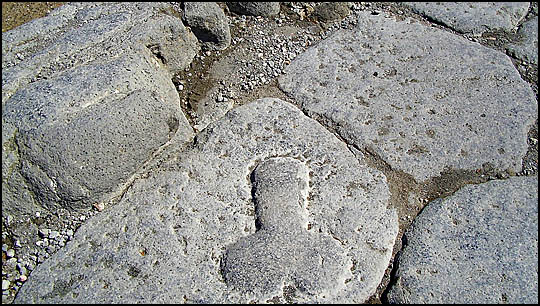 Avert your eyes children! Here and there a carving of a phallus can be found in the roadway - perhaps pointing to a house of ill-repute... or perhaps pointing out a house with a very good repute...! 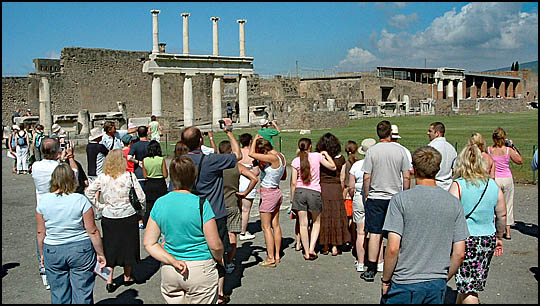 The site of the Forum, looking over to the Temple of Jupiter. 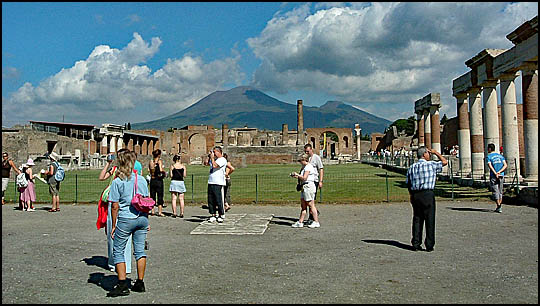 As Lucretzia said to Bilius at No. XXIII Arena Street, "It'll never last..." And it didn't. This is all that's left of why. At the time Vesuvius had a single coned peak. So follow the sides of the volcano up until the lines would meet. That's how high it was until it blew itself apart. 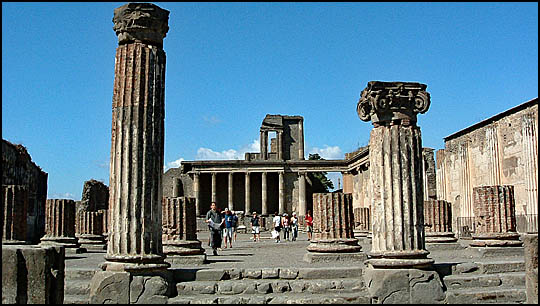 The Temple of Apollo. There are lots of wonderful things to see in Pompeii. It was a large city - you certainly cannot hope to see it all in one visit Another figure huddled against falling ash and pumice stone. This was in one of a number of shops with amphorae and lots of earthenware goods. 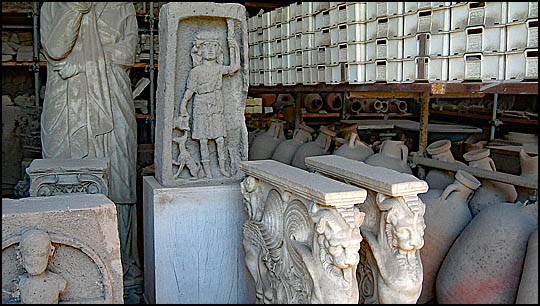 Many of the old shops have been used as storerooms to hold the thousands of finds uncovered over the years. Pompeii had not been entirely covered. The highest buildings would have had their tops poking out of the ash which settled to a depth of around 82 feet (25 metres). However it was 1592 when the ruins were first found, when work was ongoing to divert the River Sarno. At that time the remains were simply covered up again.

Herculaneum was discovered in 1738 and led to an expedition to uncover Pompeii ten years later, although it was only discovered that the city was Pompeii in 1763 when an inscription was found that identified the city. 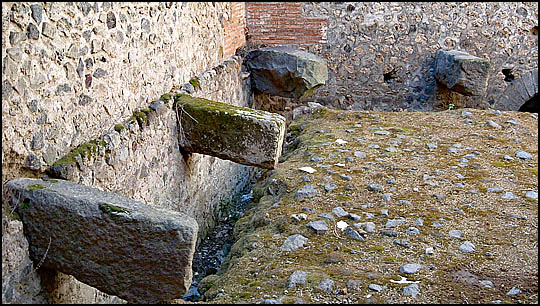 The remains of a latrine. A continuous shelf of marble would have run on top of the supports from the wall with keyhole shapes for men to sit companiably together - no partitions - in peaceful convenience... Waste fell into a flowing stream whilst a second stream with clean flowing water before the men's feet allowed them to dip their sponges-on-sticks that were used in place of toilet paper. 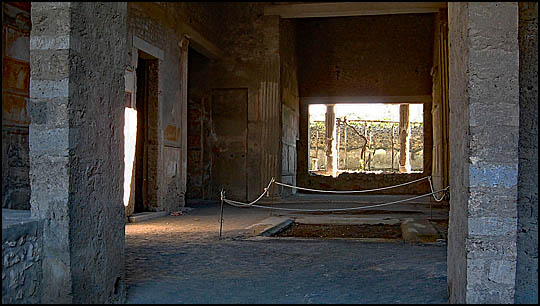 The House of The Tragic Poet (also called The Homeric House or The Iliadic House). 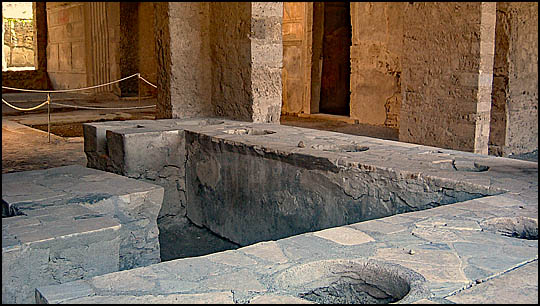 However tragic his poems may have been, he had another branch of MacDonaldus mouseburgers handily just next door. 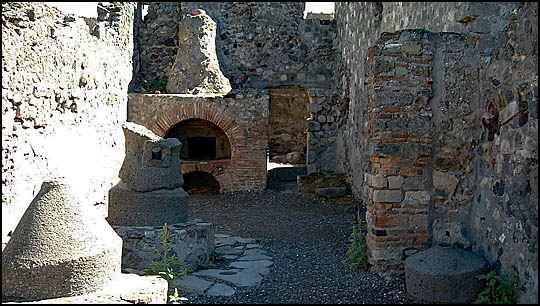 Round the corner was a bakery shop. The oven was still standing, though the fire had gone out. 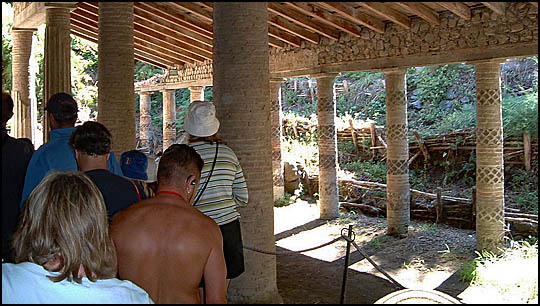 Towards the end of the tour we were taken through the city's cemetery. Bodies were interred in crypts above ground, rather than being buried. Passing through the cemetery, we queue for the final impressive sight as we enter the House of Mystery. 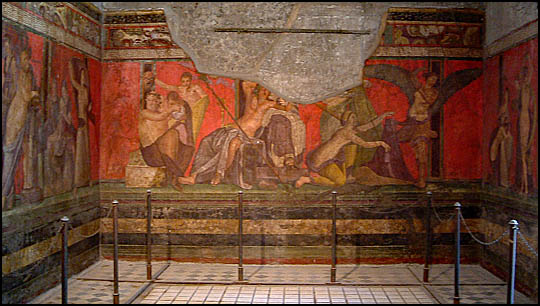 The House of Mystery has the most wonderful Roman paintings left in existence. The colours are amazingly vivid. These paintings are at least 2000 years old. 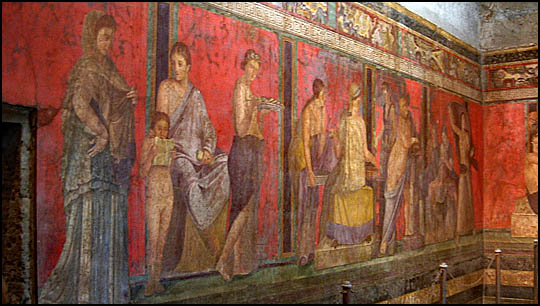 Vesuvius killed somewhere between 10,000-25,000 people in AD79. In 2009 over 3 million people live around it. It last erupted in 1944 and will erupt again, although the eruption of 79 was by far greater than any eruption since (at least 40 eruptions have occurred since AD 79). But that's not to say the next won't be worse 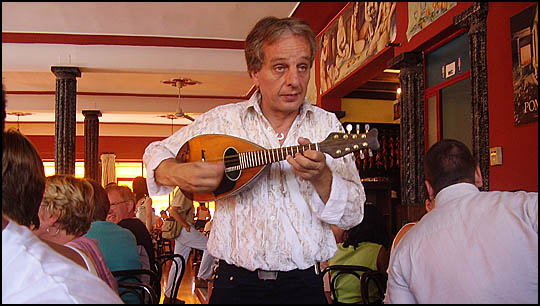 Our trip included lunch in a nearby restaurant. This fine fellow gives a quick serenade of O Sole Mio and that tune from the Godfather - ah splendid! Horse's head and spaghetti! (That's a joke, please do not sue...)