There was an antiques fair on in the Winter Gardens today and I nipped in to have a look, coming away with a whole bag full of 15 books for a tenner - that'll keep me going for a bit - and half a dozen old postcards at 25p each. They are a bit tatty around the edges but what does that matter? 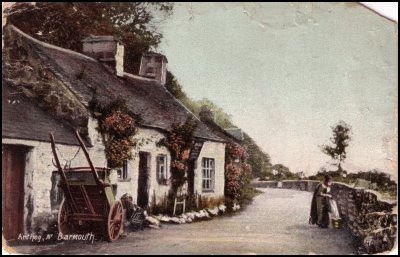 This one shows an idyllic scene of Arthog, near Barmouth in Wales and was sent on 20 August 1918 from the Vicarage to an address - beautifully simple: "The Bungalow, Llanwygwril" is all that's given.

In the picture two children are standing at the side of the road in the distance and the woman in the foreground is pouring water into a bucket, perhaps to give the children a wash which is why they've run off up the road? 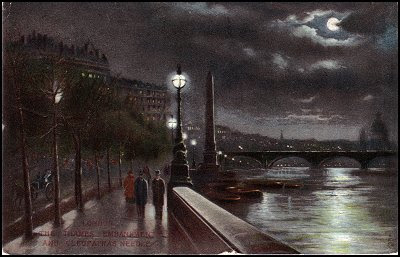 One of the other postcards shows the London Embankment at night with Cleopatra's Needle in the middle of the picture.

It looks more like a painting than a photograph this one, though many postcards were a good mix of both with a painted image over a photographic background. This one was sent on March 10 1904, the postage being, at a ha'penny, half the price of the one sent ten years later.

Again no house numbers used in the address which was sent to "Moat House" somewhere in the Midlands and with a rather apologetic message:

My dear Ellen,
I was so sorry I could not send a card before but I could (then he realised this excuse wouldn't wash as he was in London and crossed out the word "could") did not go into a shop.
With love D.C.T.