A Day in Zadar, Croatia

Sunday 23 September 2018. Marella Celebration docks in Zadar in Croatia. Another of several places we have not been to before this cruise. 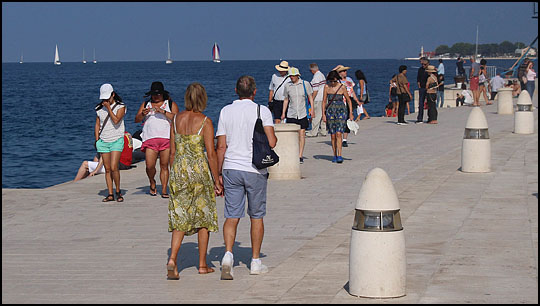 Zadar has a traffic-free medieval and Roman centre and a shuttle bus takes us from the ship to the seafront so that we can explore on our own. There is a sea organ here with the pipes leading to holes in the paving along a 70 metre stretch of the coast. Wave action blows air through them so that random notes sound as you walk along. 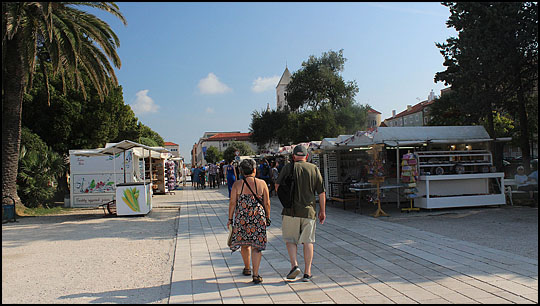 We ignore this path that leads into the town in favour of walking the full length of the seafront which our map told us would lead to one of the old city gates. 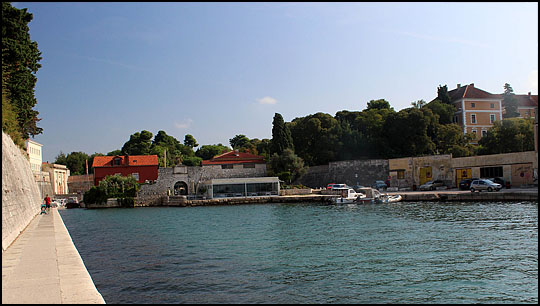 The latter part of our route took us alongside the medieval city walls and a couple of times we thought we were heading for a dead end only for the path to reveal itself almost at the last minute. 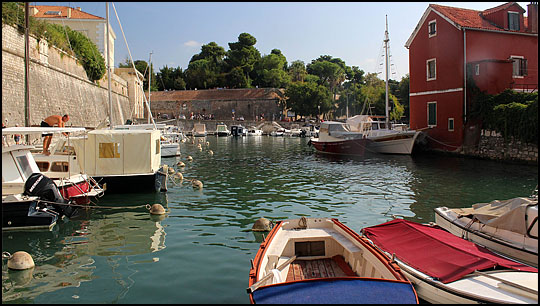 You can see what I mean here. The gate itself is now in sight, but how to reach it? 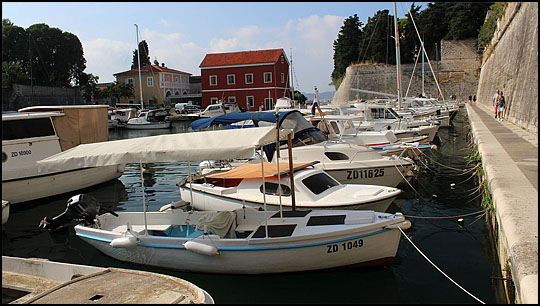 Not until we reach it is the path revealed, narrow, but passable. 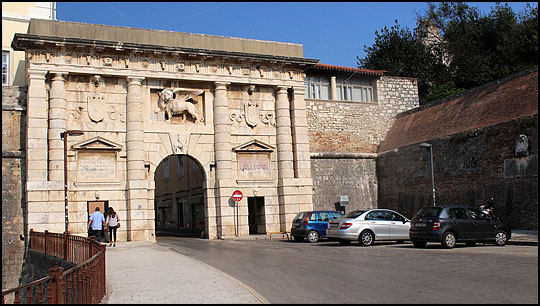 The gate bears the almost inevitable Venetian winged lion symbol. To the right of the photo atop the wall are five wells, but we missed them this time. 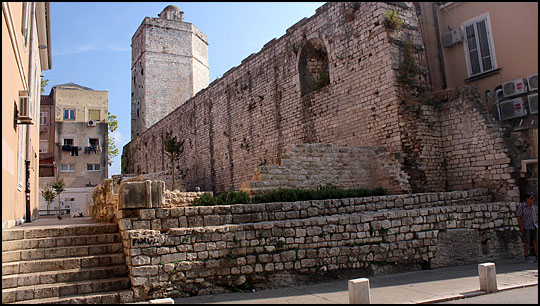 Instead we passed through the gate immediately looking right to the walls of the Svarog Bar and the Captain's Tower. 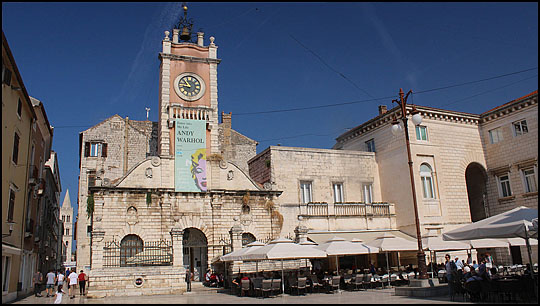 Narodni Trg or Peoples' Square. The building is the home of the Town Guard. It's ok, I wasn't causing trouble... 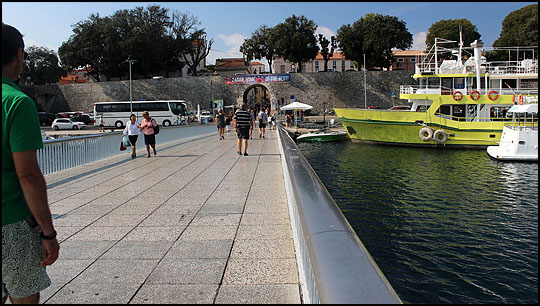 We turned right 90 degrees at the Square and, passing through a gate, came to a waterway with a pedestrian bridge to the opposite side. It turns out that the old town of Zadar is built on a peninsula or promontory, so the water on both sides of it is the Adriatic Sea. Over the bridge was the modern part of Zadar. In this view we are facing back towards the old town and the two figures on the banner over the gate are Zadar's medal winning rowing team from the 2016 Olympics. 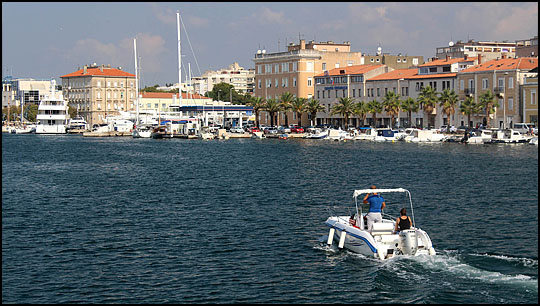 Looking towards modern Zadar over the inlet of the Adriatic Sea. 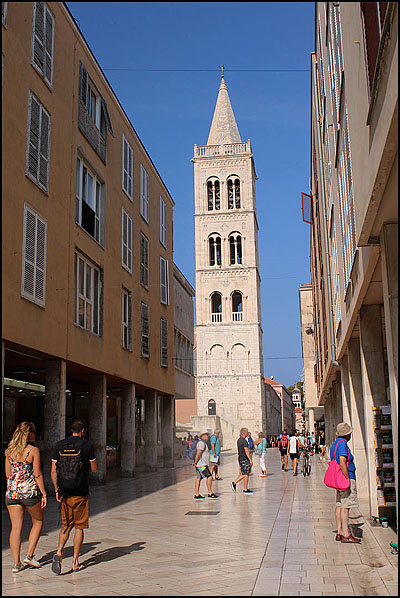 We returned to the Peoples' Square and once again turned right 90 degrees thereby continuing in our original direction through the town. We were now walking along a well-to-do shopping street. At the far end, the bell tower is that of St Anastasia's Cathedral, which dates from the 1100s and contains the saint's relics. 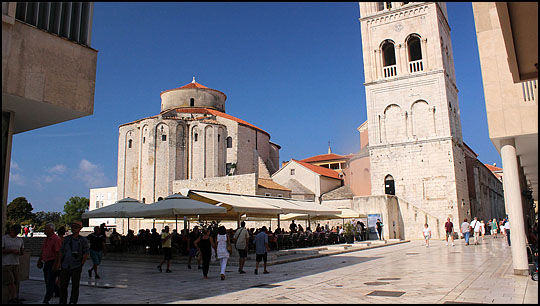 Next to it, once we reached it, is the unusual circular Byzantine church on the left; St Donatus, dating from the early 800s CE. It is one of a very few Croatian churches to survive the Mongol invasion of the 13th century. 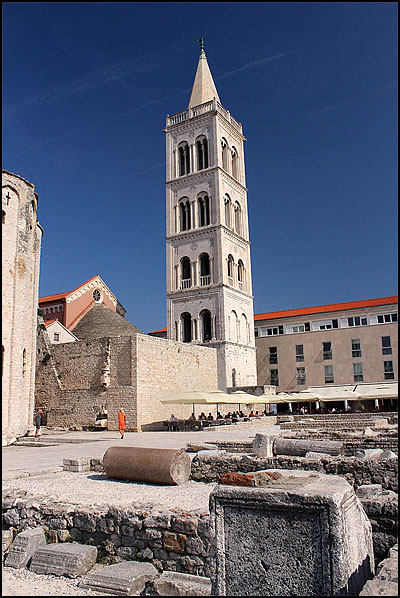 So a Mongol invasion, the Ottomans and Venice. Before them all were the Romans and these two churches stand over the site of the Roman Forum. 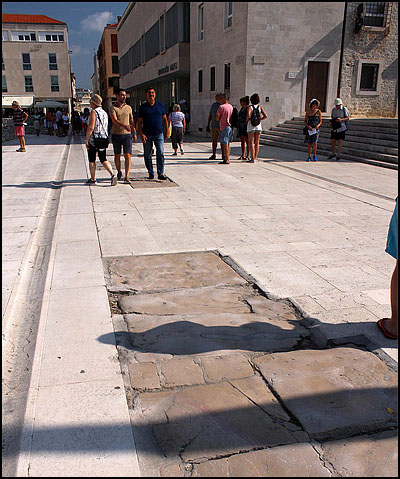 Some original Roman stonework is contained inside the churches and in the pavements and gardens to the west. 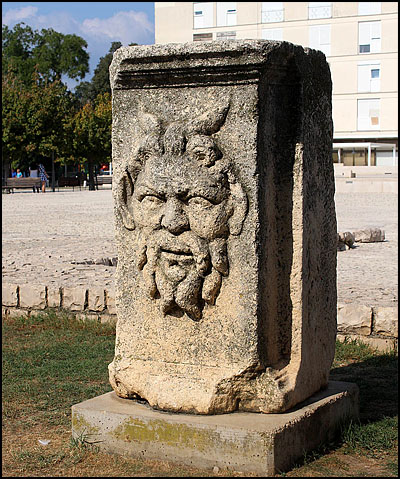 Making a selfie was a tough proposition in the Roman days... 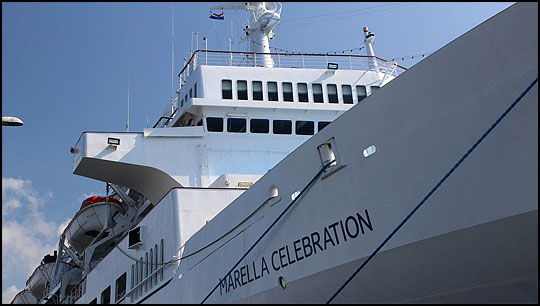 We sit admiring the Roman remains and gardens then walk back to the pick-up point for the shuttle bus back to the ship. The bus leaves as soon as we have sat down. 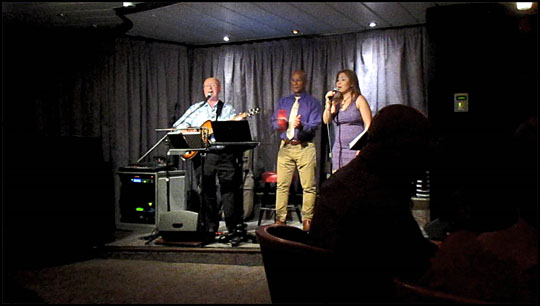 Songs tonight include Halfway To Paradise by Billy Fury and I Saw Her Standing There by The Beatles.