Sunday 1 May 2016. In the last article we took a walk through the huge shop along Main Street U.S.A. so I suppose this could almost be part two of this day in Florida's Magic Kingdom. There will be at least one more to fit in all the photos I took (never mind everybody else in the party!) so we still haven't finished with Disney just yet! 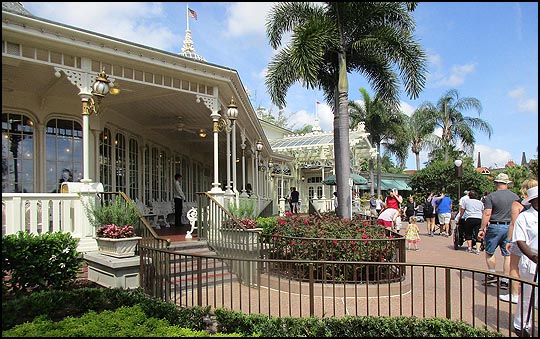 This would be our last visit to the Magic Kingdom so I did go a bit berserk with the camera trying to capture as many reminders as I could. Even so there's loads of stuff that over the weeks since we got back I've thought "I don't have a picture of ----!" This is the beautiful Crystal Palace. 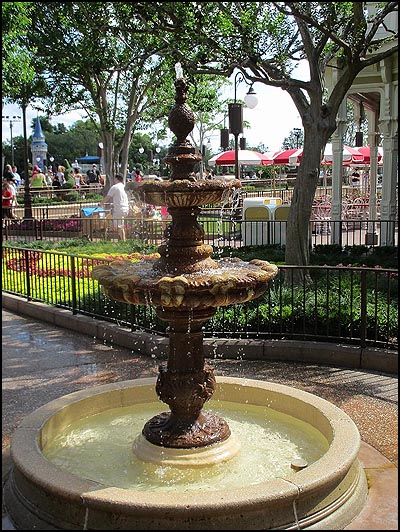 The fountain helped cool you down just by the gentle sounds of the water splashing. Many guests dipped their hand in it whilst passing. The gardens are kept immaculate. 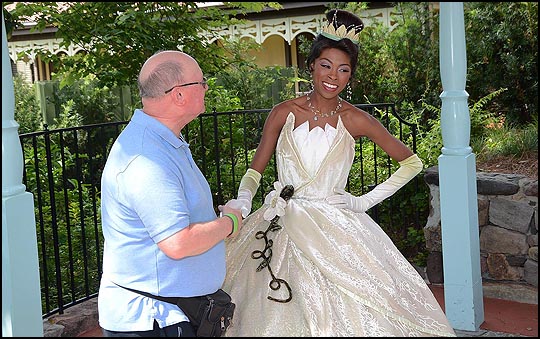 This is Princess Tiana from a fairly recent Disney cartoon, The Princess and The Frog. Perhaps a trifle older than the Tiana of the film, though we did notice that one or two princesses had grown up somewhat during the stay! She had no one waiting to meet her which we thought must be a bit off-putting for her so whilst at this point we didn't have the EGGs with us to use Grace as an excuse. we went up to give her a photo opportunity.

She held out her hand for a handshake but you can't just shake the hand of a princess, so I raised her gloved hand and lightly kissed it, which caused her to give a surprised (but it did sound quite pleased!) "Ohhh!" 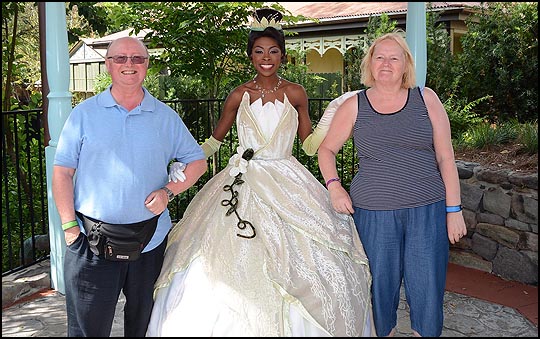 She said, "Can I take your arm, Sir?" Well of course you can my dear, but please bring it back quickly as we fly home tomorrow... 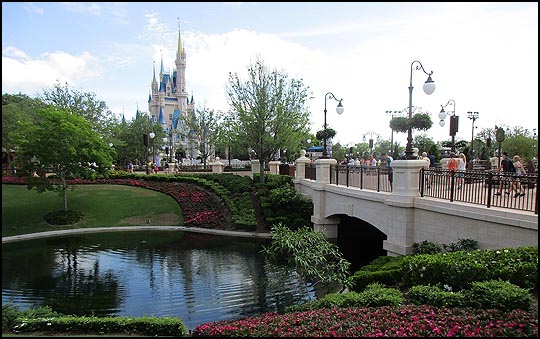 Water plays a large part in the landscaping. Considering that everything you see here was a swamp before Disney arrived, it's hardly surprising that there should be some water I suppose, but it does make for some wonderful views. 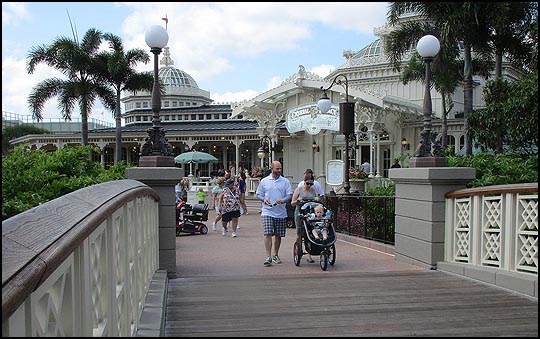 The other thing that water does is require you to either cross it or circumvent it. You have the choice to do both mostly, but let's have a look at some of the bridges. 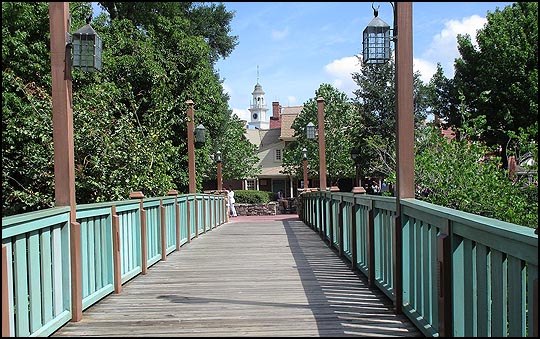 This one crosses from Adventureland to Liberty Square. It's on a direct line from the previous one that led from the Crystal Palace. Square lanterns light the board walk after dark. 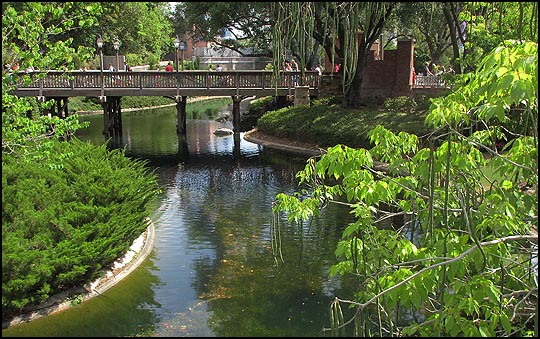 Looking from the bridge we see another similar bridge which leads from the central hub of the park also to Liberty Square. This time the lanterns are slightly more modern in style and sit on extensions at the side of the bridge's piers. 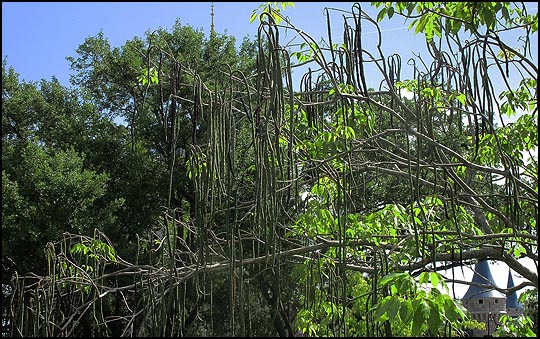 Whilst looking at the above bridge I suddenly noticed that the tree on our right was loaded with long bean stalks or seed pods. So if you want to go looking for any Disney magic beans... 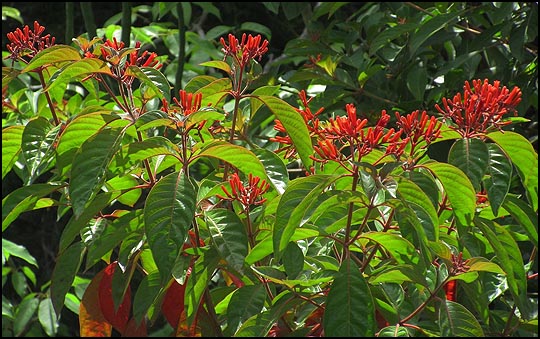 At the foot of the tree was this gorgeous bush. Please don't look for any plant identification from me. My knowledge only extends so far as to be able to say that this is a bush with flowers on... 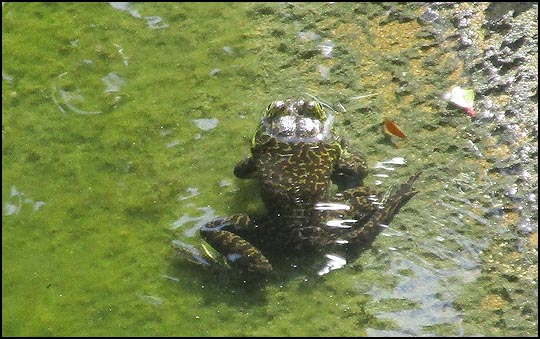 And looking even further down... I sent Miss Franny running back to Princess Tiana to tell her we had found her frog... 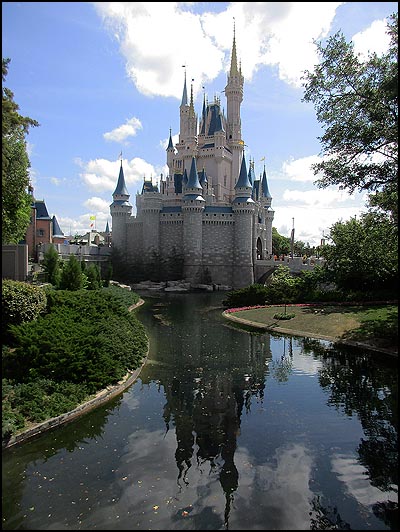 Join us next time for a closer look at the sumptuous Cinderella's Castle amongst other things.