Sunday the First of May. Our last full day in Florida and although we won't be flying until 6:00pm-ish tomorrow I suspect the day will be a wash-out as far as doing anything but eating and preparing to leave is concerned. But first there's one last day to cram in those experiences and they will probably stretch to at least three articles... 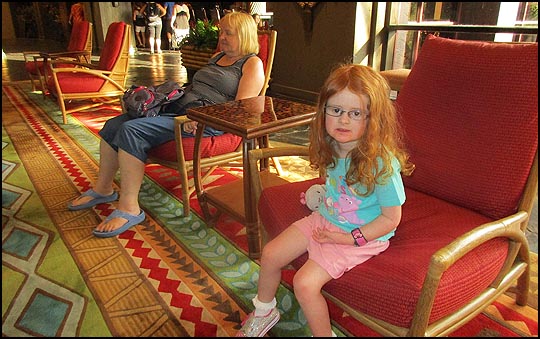 We start with a bus to the Magic Kingdom, where we catch the Monorail to Disney's Polynesian Village Resort. We are here for another character breakfast and happily Grace has got over her grots, having thrown them mainly all over herself, her Mum and a total stranger in the middle of The Lion King Show at the Animal Kingdom yesterday afternoon. She is bouncing about in excitement again at the thought of meeting Lilo and Stitch. 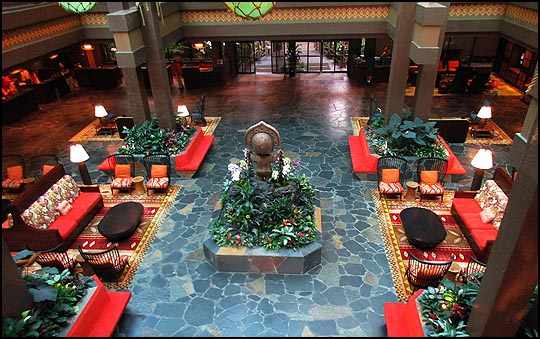 Eddie has stayed in this resort with his parents before he and Gill were married and it does look a very nice place. Themed on the Polynesian Islands of the Pacific the resort opened in October 1971. The Great Ceremonial House that we are in was modelled on a Tahitian royal assembly building and contains the resort's main restaurants and shopping area. There used to be a water feature in the lobby but it was removed for Health and Safety reasons and to provide a larger social space. 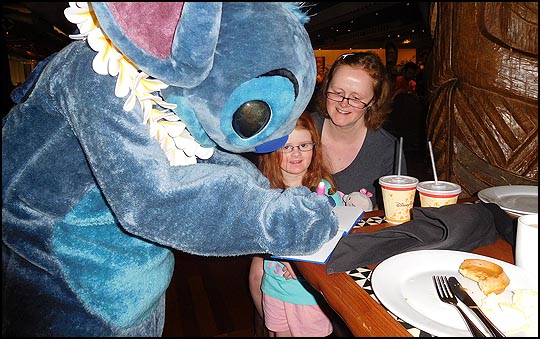 We are called to our table in the Ohana Restaurant and it is not long before our first visitor is welcomed by an enthusiastic little girl! This is Stitch. Perhaps not one of Disney's best known characters to adults, but he is one of the two main characters in Lilo and Stitch. This tells the heart-warming story of an alien half-robot, half-animal intelligent killing machine that lands in Hawaii and befriends a little girl. So far, so believable... 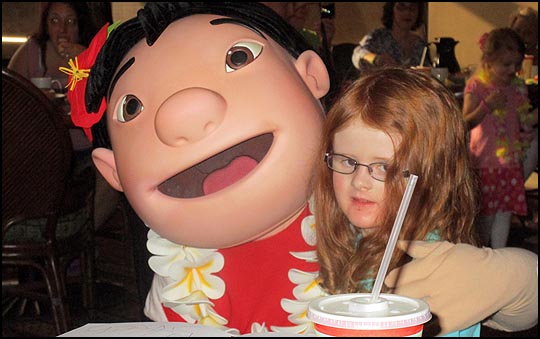 Lilo is the little Polynesian girl that he forms an attachment to. And you thought it was going to be the tale of a killer alien and an inflatable polythene mattress, didn't you...? 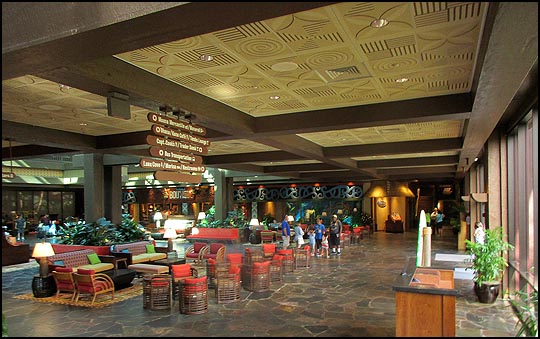 After breakfast, the EGGs are keen to get as much time in the parks as possible but we decide to have a look around the resort first and meet up later. We have a fast-pass to all go on It's a Small World. As though I don't have that tune still going round my head... 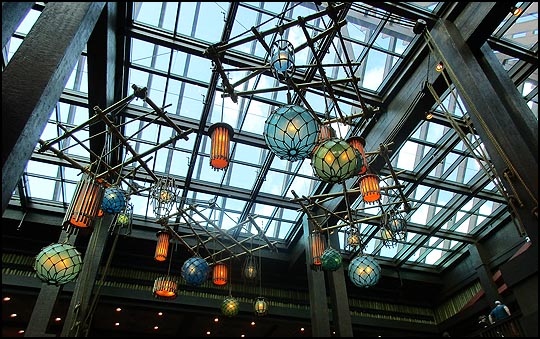 So a few photos inside the Great Ceremonial House, starting with the glass roof and colourful lighting. 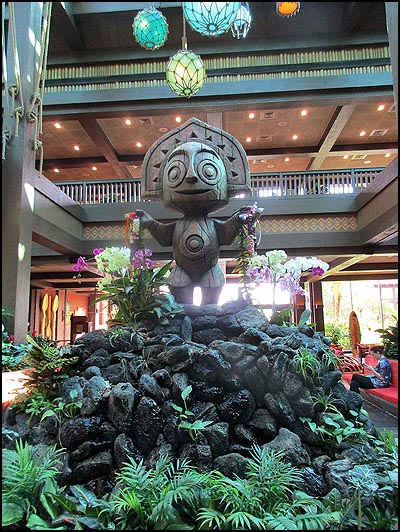 The little Tiki carved wooden sculpture takes pride of place in the centre of the lobby, facing the main entrance doors from the Monorail station. 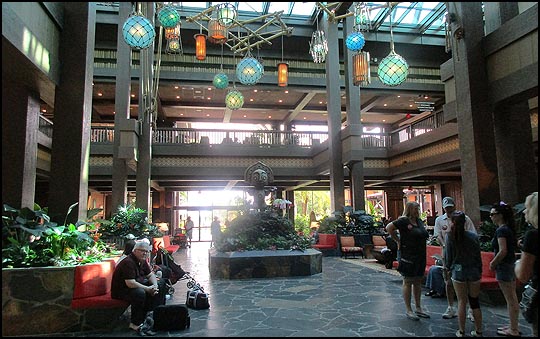 Behind him another set of doors at the far end gives access to the pool and beyond to the Seven Seas Lagoon. 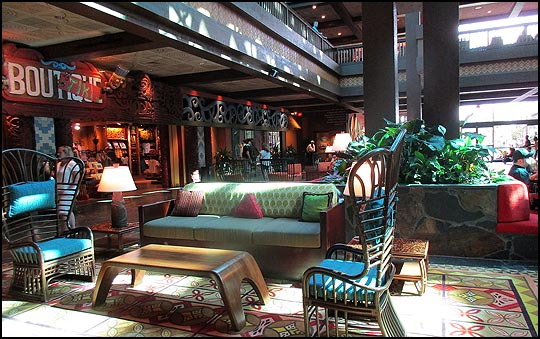 After a look at the decoration, Fran thinks it only right that we should also have a look round the shops... There's not a great multitude of them in here at ground floor and we only went in one anyway which was a boutique. 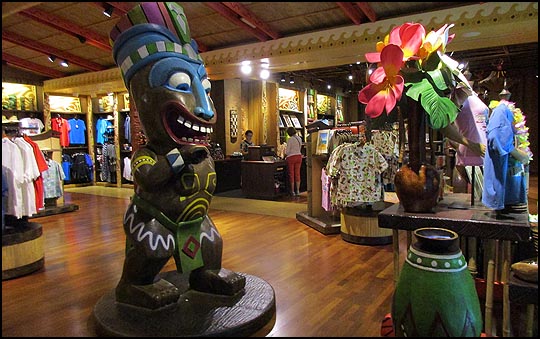 A tiki figure in the boutique. As he is looking down I would have thought it would silence any misbehaving child with immediate effect if they were placed in front of it! 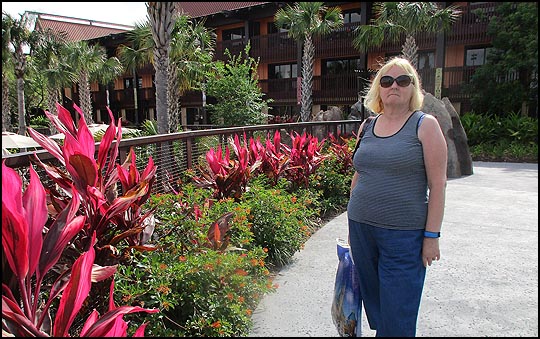 Miss Franny standing in front of one of the accomodation longhouses. This one faced onto the pool. Ground floor rooms had a little patio area and upper floors a small balcony. 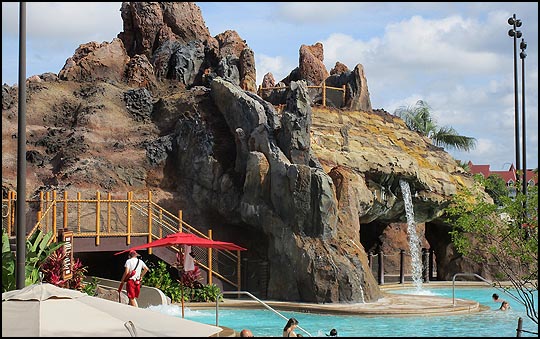 A bit of imagination has been used on the pool. On the right hand peak of the mountain you can just make out a dark hole that is the start of a water slide that curves to come out by the gent with the red shorts. 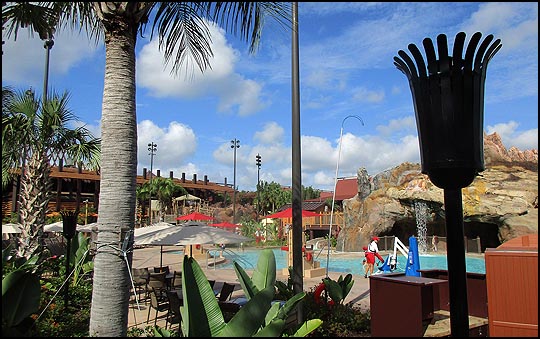 Another view of the same pool shows that parents, grandparents and non-swimmers are provided with poolside tables and sheltering table umbrellas for shade. 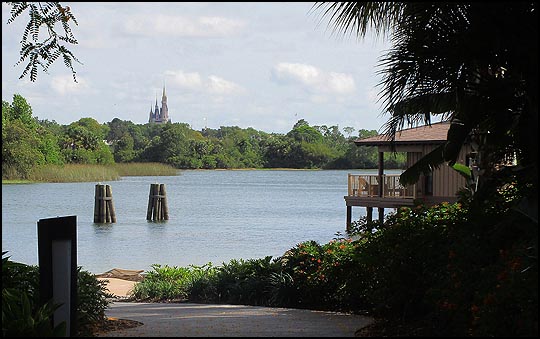 The resort fronts onto the Seven Seas Lagoon across from the Grand Floridian resort and looking down the lagoon we can see Cinderella's Castle in the distance. 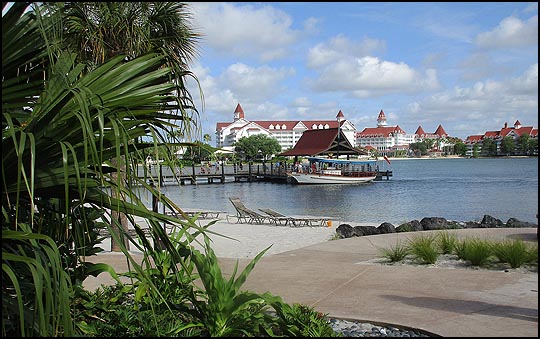 Looking at this photo you can see that Grand Floridian resort is much nearer than Cinderella! We'll take a closer look at the boats in a moment. 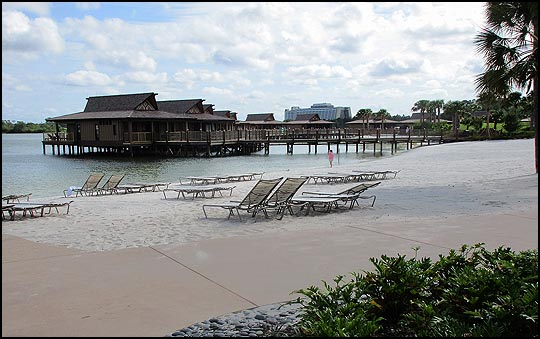 The white sand beach is almost deserted and with temperatures already in the 90s I suspect anyone from a similar climate to Blackpool's must be sheltering from the sun, preferably in an air-conditioned environment! 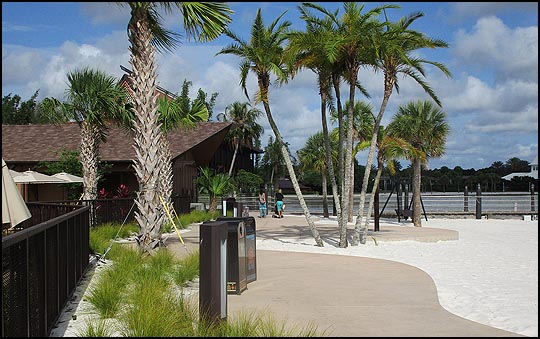 But we are not entirely alone as we circle the swimming pool with a view to taking a boat across the lagoon. 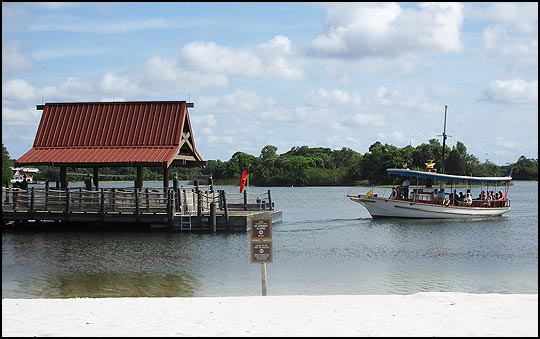 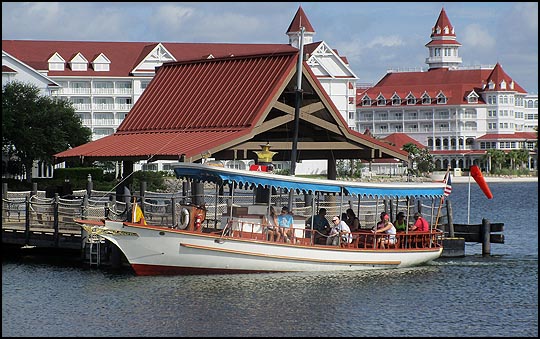 It is moored at the end of a pier and we have to do three sides of an oblong to get there so we'll let that one go and catch the next! 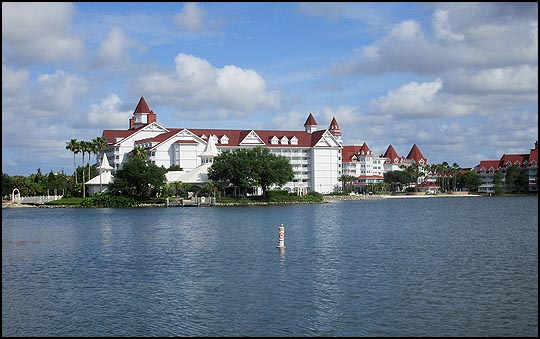 It will give us time to admire again the clean lines of the Grand Floridian Resort & Spa. This (make the most of it!) will be our last view of it for this holiday. 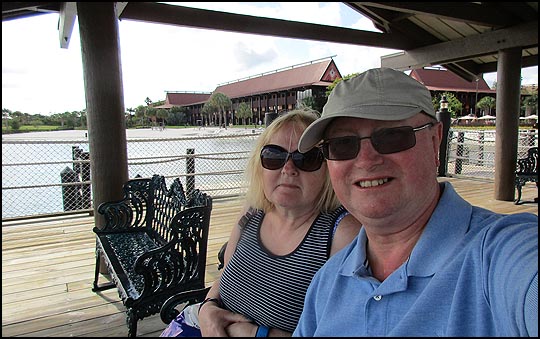 We amble onto the pier and take a seat as we wait for the next boat to come along. It is really nice here actually. We are under shade and out in the fresh air. Add a couple of cushions and I'd have been happy parked here for a while! 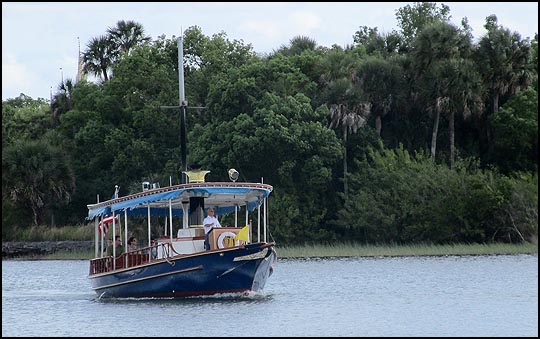 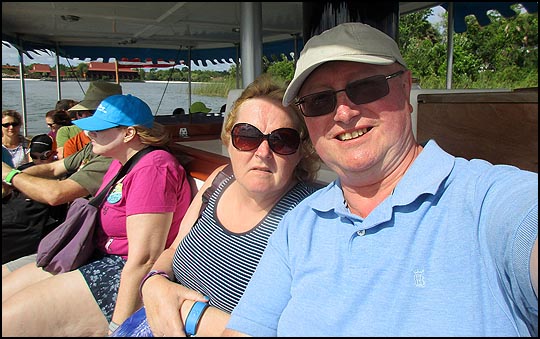 So as we get on the boat is fairly full already. I find a spot on the side of the boat, right by the wheel. I'm a true Pisces - I love boats and ships and spent a very happy year at one point looking after the administration function of Fleetwood Nautical College before it became part of Blackpool's large college. So it's nice to be in a position where I can chat to the guy at the wheel. 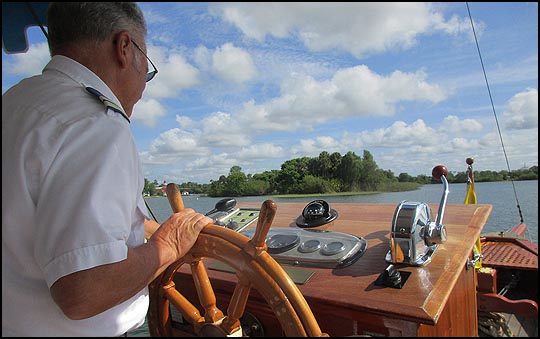 The entire crew is called Bob. I get into a short conversation with him. He does a two hour shift on this boat and then moves to another on a different route. This helps keep the job from becoming boring and keeps the boatman alert. "It's a great job," he enthuses. "I get to drive lots of boats belonging to someone else and they put the fuel in as well!"