I have blogged about this ride at the Pleasure Beach before, way back in 2008, but I was miserly with the photos then. In those days I only put a single photo on every article so, thanks to a prompt by James who left a comment asking for more photos of the ride, here's an update. 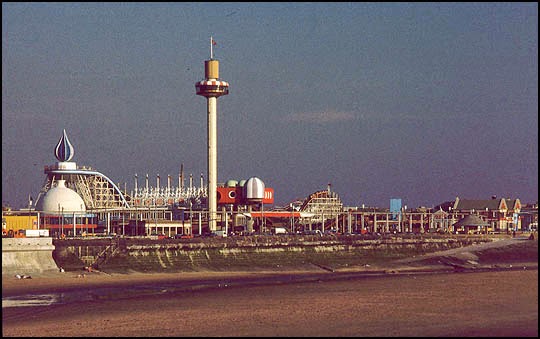 The Space Tower was opened in 1974, a 160 feet high column with a slowly spinning pod that rose to the top, spun round a couple of times and came down again. It gave some fabulous views over the Pleasure Beach itself and from the top on a good day you could see the mountains of the Lake District, the rides on the horizon at Southport's Pleasure Beach and even the Isle of Man. The latter, if I'm honest, called for not a good day but an exceptionally good day! 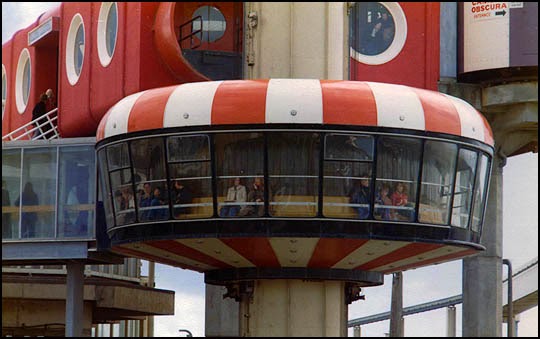 The pod in which riders sat had a single bench seat in a circle facing out. This was uncushioned plastic and after a bit most visitors stood up to let the pain die down! 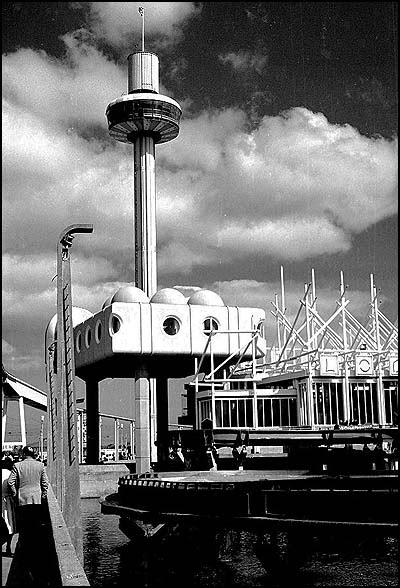 I took this shot in black and white with a red filter on the camera to darken the blue sky almost to black. It also had the effect of turning the bright red building (which housed an amusement arcade) to white. Access to the ride was down a glass-enclosed ramp close to Watson Road and the exit from the ride was above this and led into the arcade itself. The rather weird looking structures with the curve at the top in the left foreground carried lights to illuminate the Log Flume at night. 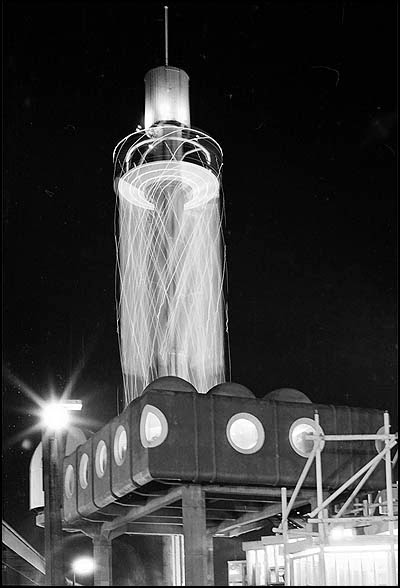 Because the ride started to rotate as soon as it started to rise the tower and continued to rotate in the same direction at the top and on its way back down, by closing down the lens of the camera and keeping the shutter open for the full length of the ride I created this rather ethereal column of light, the spirals being caused by the tiny lights on the pod. In order for the photo not to be washed out and over exposed whilst the ride was at the very top, I simply put my hand over the lens to block all light until just before it started to come back down again. 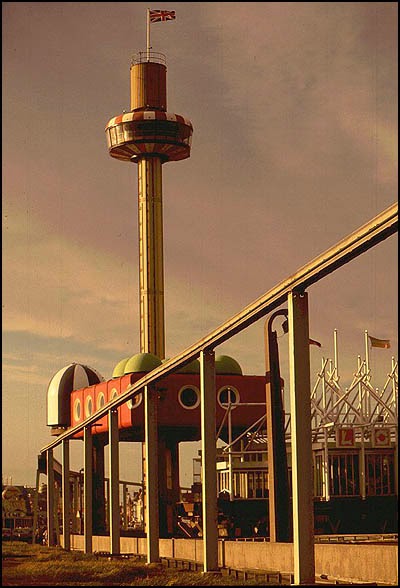 A sunset shot, enhanced a little if I'm honest by another filter. The little purple and white striped dome on the left was a camera obscura. 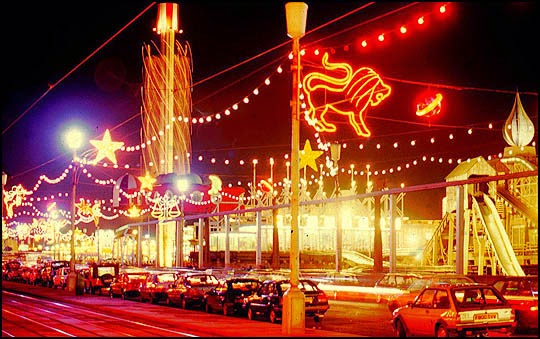 A colour attempt at the column of light. Not quite as successful due to a bit of a breeze blowing on that particular night that rocked the tripod that my camera was sitting on. The ride lasted until 1993 when it had to come down to make way for the new roller coaster, the massive Pepsi Max Big One. It was dismantled and taken to the company's pleasure park at Morecambe, then embarrassing its employees by making them dress as cowboys for the wild west-themed Frontierland. Even this didn't save the park from falling into hard times and it closed in the early 2000s, the repainted tower in sponsored colour scheme as the Polo Tower (the tower itself painted to resemble a tube of Polo mints). The Tower was the last bit of Frontierland to be demolished, but inevitably it came down eventually in 2004.

Addendum: That last sentence was a little premature - thanks to a response to my article posted on Facebook by Dave Oldfield, I was prompted to go for another look and there it was, still standing on 30 March 2015. For a look at the remains of the tower on that date see this entry from 31 March 2015.