The third article made up of photos from a recently unearthed photo album. All the photographs were taken of Blackpool in 1977. This was the Silver Jubilee year of Queen Elizabeth II and a time of exciting changes in Blackpool some of which are illustrated here. 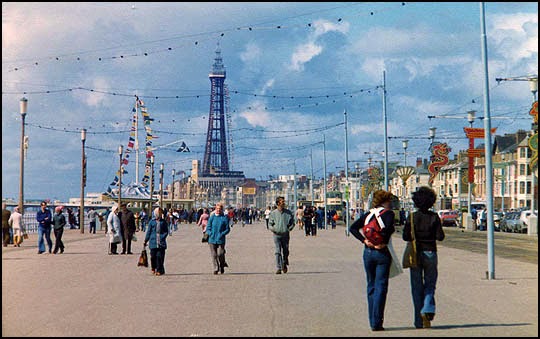 Not all of the photos were taken on the same day. There's about 60 photos in the album. In 1977 there was no such thing as a digital camera, almost no such thing as a digital anything. Home computers were still a few years off and whilst there may have been the first few digital display watches coming out, anyone who answered "16:05" in response to being asked the time was probably looked at scathingly whilst saying "What's that in proper time?"

So these photos were taken on colour negative film. Technicolor film was a favourite of mine at the time, though I also used Kodacolor every now and then, or Fuji or other obscure brands like Barfen or Orwo which could be bought in bulk lengths through the photographic press and had to be loaded into cassettes in total darkness before being used in the camera. Bought films came in lengths for 12, 24 or 36 photographs and once exposed, films had to be taken to the local camera shop, chemist or the few specialist developing houses for the film to be developed and photos to be printed on special paper. The alternative was doing it yourself in a darkroom which for colour prints was a very fiddly business with some quite nasty chemicals.

The first photo today was obviously taken on quite a breezy day. The flags are flying well off the tethering ropes of the flag pole to the left of the Tower whose own flags, placed there for the Silver Jubilee, plus the excess material of people's seventies flared trousers are all showing the direction of the wind blowing off the Irish Sea!

Above the Promenade, the strings of sockets are waiting for the illumination bulbs to be fitted and over the roadway on the right the illuminations show a Chinese theme. 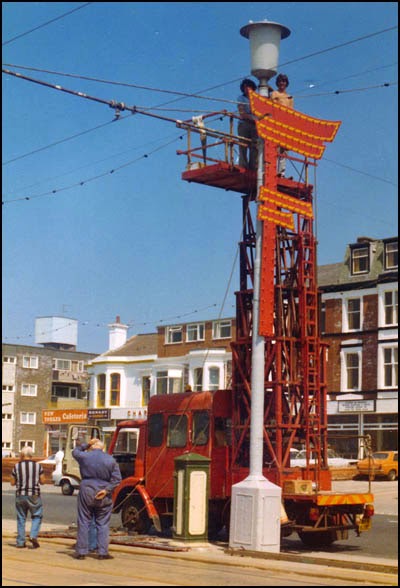 This looks as though it was taken on a brighter day! It shows a gang of workmen from the Corporation putting up the illuminations we saw in the previous photo. 1977 marked a bit of a changeover period for the illuminations. It was in the middle of several years in which the illuminations on lampposts along the roadway changed from these wooden flats, painted with designs that were then lit by coloured bulbs. Some of the bulbs were painted matt black on the outer part of the bulb so that viewers saw the lit board underneath rather than the glare of the bulbs themselves.

The extending lift of the Corporation wagon looks rather primitive by today's standards. One side of the lamppost has been fitted with its flat and the other lies on the ground. The lorry operative, dressed in overalls is scratching his head in conversation with someone hidden behind him, but the two men up on the gantry have seen me and are posing happily for their picture to be taken.

On the other side of the road in front of the wagon is the bright orange sign of the New Yorker Cafeteria. I have fond memories of sitting in it in the mid sixties, sipping scalding milky coffee (latte? What on earth is that???) out of clear glass Pyrex cups that sat on matching clear glass saucers whilst listening to The Beatles Yellow Submarine on the jukebox! 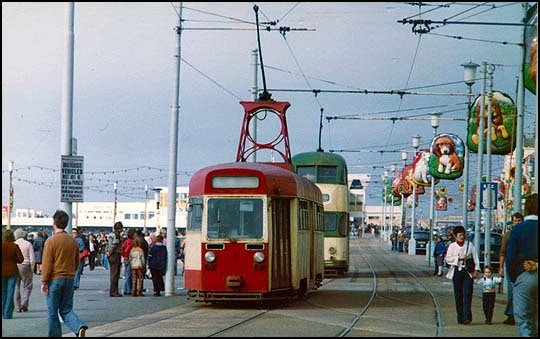 A little further along the Prom, we approach the Central Pier. A double deck "balloon" tram heads north up the track, closely followed by tramcar No.1 - a new-fangled tram adapted from the Brush railcoach tramcars and given extensions at each end so that they can be run as a One-Man-Only operation. The driver no longer has a cabin to himself, but is sitting as a bus driver would, with a ticket machine taking fares as people enter the tramcar. This leads to conductors losing jobs and also hold-ups along the line, as each tram has to stop longer for the driver to take fares. Due to the strange configuration of the ends of the tram, they came to be known as "coffin-trams".

The coffin tram here is rolling over the junction of the emergency line running down from Princess Street. This street was the first in the world to have an electric tram roll down it in 1885 but was in use only as an emergency route to the Promenade in case of a fire in the tram depot. Because there is a gap in the pavement for the trams, a sign warns car drivers that unauthorised vehicles must not be used or parked on the foreshore.

Looking to the right for a moment we can now see some of the new illuminations - a set showing puppies - made of fibreglass with the light bulbs housed internally and lighting the display from within. 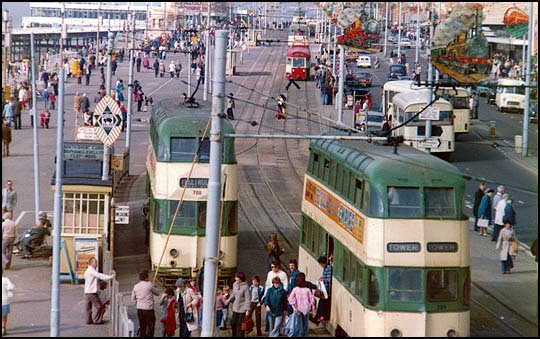 Further up the Promenade again, to take this photo I am standing on the pedestrian bridge over the seafront roadway between New Bonny Street and Adelaide Street West. The trams are at the Tower tram stop where the line branches off to a third line. Trams for the Tower only stop on the middle line, one of whose passengers are disembarking in the photo. They then have their poles reversed here and then cross over to the southward line. At the bottom of the photo a tramway official is taking down the long hooked pole used to grab the tram pole which is pulled down off the line, often with a satisfying crackle of sparks and then swung round as the operator walks round the tram to position the pole under the line at the other end of the tram and slowly ease it upwards until it sits correctly on the line.

A Fleetwood-bound tram has swung into the branch on the left to continue its journey northwards. Further up the line a young man has cheekily tried to dart in front of the southwards coffin tram. The driver has sounded its hooter, causing the young man to take a spectacular flying leap to get out of the way. For most other towns in the UK, trams have not been seen on the road for over twenty years and visitors to Blackpool sometimes act as though they expect the trams to be able to swerve round them!

On the right hand side the illuminations at this point are the old-fashioned flats and are a series featuring steam locomotives. The bulbs along the streams of smoke from the funnels are controlled by elaborate banks of relays and flash on and off in sequence to give the illusion of smoke coming out of the funnel and along the top of the train. Very effective and in the absence of computers and gaming machines, they instil a sense of wonder in children who see them. 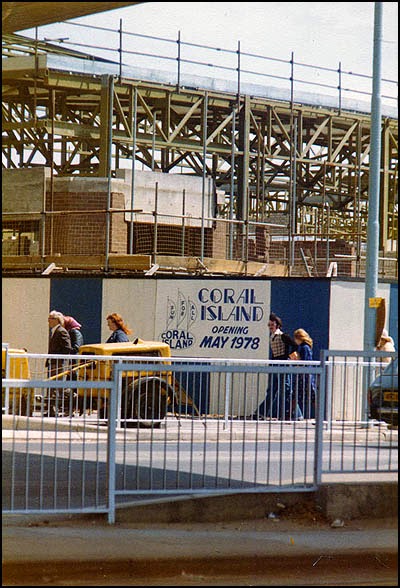 Taken from the bottom of the pedestrian bridge (it can just be glimpsed overhead in the top left corner) we see the girder framework of a new building on the Golden Mile. A sign tells us that it will be called Coral Island and that it is scheduled to be opened in May 1978. Locals tut over the size of it, as most amusement arcades along the Golden Mile at this point in time are nowhere near as big as this is going to be. Others are still sighing as they look at the site, remembering the heydays of Blackpool Central Railway Station which occupied the rear of this site until its closure and demolition. 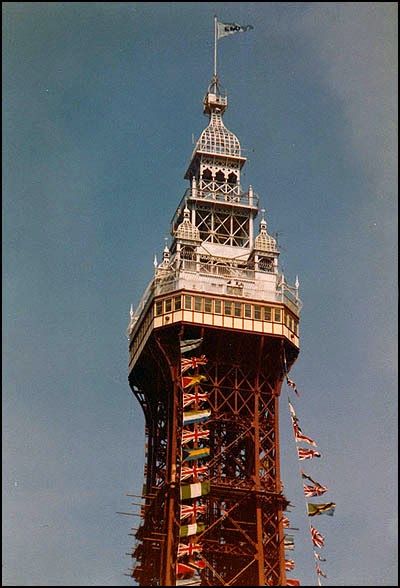 We are close to the Tower. Looking up we can see that the Tower top has been painted silver in honour of the Queen's Silver Jubilee. This brings us to the end of article No.3. In the next article we'll have a look at both sides of the Promenade, as even the side next to the beach and sea is very different to today. 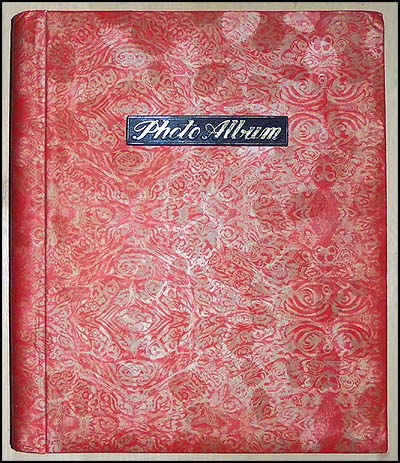 Return to Blackpool Promenade and Beach Index Page
Posted by John Burke at 14:03