Saturday 18 August. We take the ferry down Lake Garda from Riva to Malcesine. 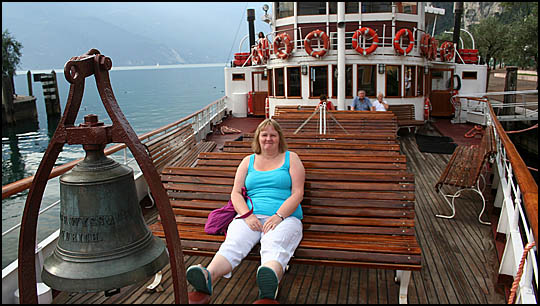 The nine o'clock ferry from Riva is the G.Zanardelli, a paddle steamer that is so beautiful it deserves - and will get - an entry all to itself in a day or two. Meanwhile Fran stretches out as at this hour we do not have too many fellow travellers! 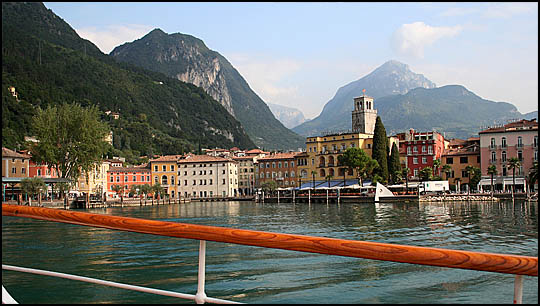 I always think that the view of Riva from Lake Garda is one of the most beautiful bits of scenery on Earth. Who could fail to fall in love with a view like that?

The nine o'clock ferry does not cross the lake to Torbole, but instead immediately heads southwards down the lake towards its first stop at Limone. This takes 40 minutes and the time is spent relaxing, drinking in the views and feeling the breeze in your face. There's a set of dots floating in the sky in the distance and we wonder what they are until we get closer and can make them out properly. 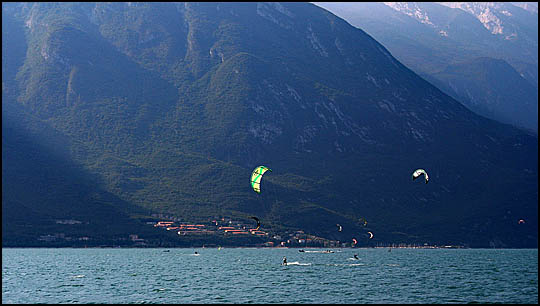 They turn out to be the large canopies of kite surfers. These criss-cross the lake at a few points but these are whizzing to and fro in front of our path and seem almost suicidally eager to get as close to our bows as possible, like birds darting in front of your car down a country lane. The G.Zanardelli may be an old ship, but there is nothing wrong with its hooter, which frightens us to death never mind the kite surfers! 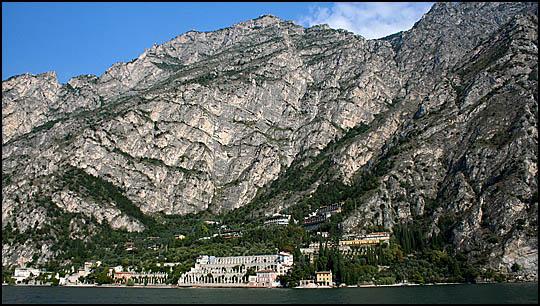 And then the imposing cliffs of Limone. The first sight of Limone is of the terraces of stone with pillars rising as though to support a roof. These are lemon terraces. Limone does not grow all that many lemons now, but in the past these groves were filled with trees and produced some of the largest lemons you can imagine. Nothing like the small weedy things we get in England! They are like small rugby balls! You will find some on the markets and shop fronts in Limone. 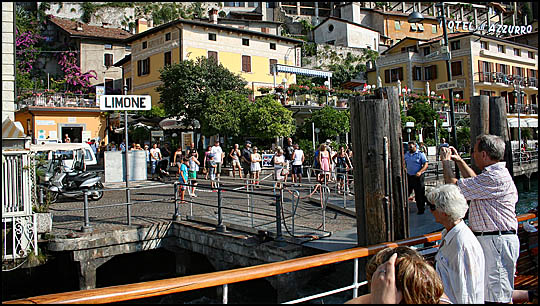 The G.Zanardelli hooter blasts again briefly to let the shore staff know to leave the ticket office and stand by to receive the next group of tourists. There's a sizeable crowd of people waiting to board, armed to the teeth with cameras, sun tan lotion, excited children and aged mothers. The Italians have far more aged mothers than aged fathers it would seem... They swarm onto the ferry, jostling for places against the rail where they can be photographed with Limone as the backdrop.

"Bella!" enthuses one daughter as she snaps for posterity a wrinkled 80-year-old, clad in a skirt matched (I say this loosely) with a bikini top that has a rather optimistic cup size. What used to be her breasts hang into it and curl back up in the bottom of the cups, the nipples pointing vertically at the sky. Behind me a young man leans over the rail to be sick into the lake... 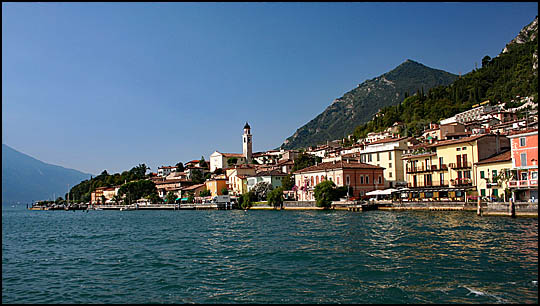 For the good of my health and the retention of my breakfast I try to concentrate on the lakeside scenery of Limone. There, for instance, is the bar cafe we sat in, in 2004 with my own mother, who would not be told to stop flapping away at a hovering wasp until she did connect and managed to knock it out of the sky and straight into her glass of wine... Ah... we're off again! 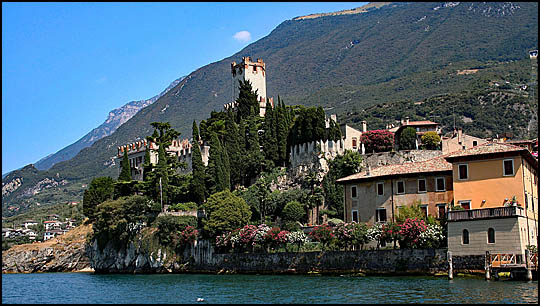 The crossing (for Malcesine is on the eastern side of the lake) from Limone to our final destination takes a further 25 minutes. We are now on a quite crowded boat and there are people to watch - and avoid watching - and a new set of kite surfers to negotiate.

Malcesine has a castle set prominently on a huge jutting rock by the lakeside and this is what you look at to gauge how close you are. The G.Zanardelli will turn at this point and return to Riva so we sail past the landing stage and turn to come back to it. The ramps clatter onto the side of the boat and we are herded off and onto the terra firma of Malcesine (say it "Mal-chess-sin-ay" with the accent on the second syllable). 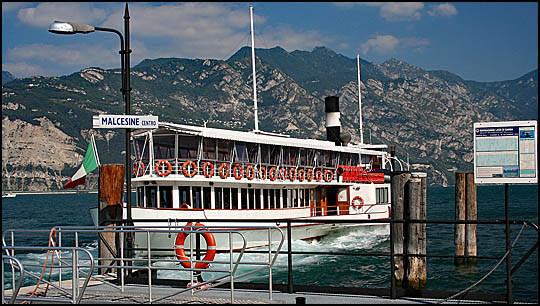 The first thing you have to do is to watch your ferry depart. The side paddles of the G.Zanardelli churn the water from blue to white and she pulls away from the landing stage, leaving you to the tender mercies of Malcesine for a few hours.