Last night saw us at the Heskin Hall Steam Fair once more - we've been playing this event every year since 2006 and it is always a brilliant night for us. 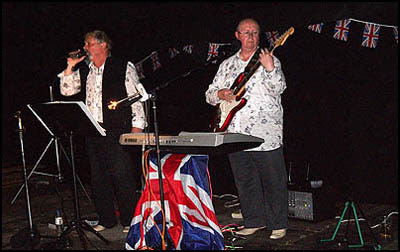 A huge marquee was our venue for the night - half again as big as in previous years and as we set up only a couple of tables had people sitting at them. I needn't have worried though because the place filled to capacity with a considerable number of people standing close to the bar area as well as the seating area.

We were kept busy. In fact we played an incredible four and a half hours, finishing with a version of House of the Rising Sun.

For some reason my guitar effects pedal was giving me palpitations - it cut out once or twice but seemed to come back ok after a vicious kick... Going to have to look at that and hope it behaves itself today! 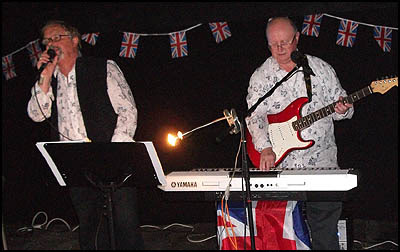 This afternoon we are playing for the Diamond Jubilee Party at Scorton Village. The weather is a bit wet - it was raining last night as we carried the gear back to the car and from the state of the field had been for some time.

It's not let up since then so I think we're going to be in the Village Hall rather than on the field but we'll do our best to inject a bit of cheer!