A couple of gig reports. Fran hadn't picked her camera up for the first one but yesterday David gave me a disk of photos taken by Jeannie so I can now include a report here!

23 December 2010 saw us at the Wyrebank Banqueting Suite in Garstang, battling snow and ice to get there to play for a rather unusual event. 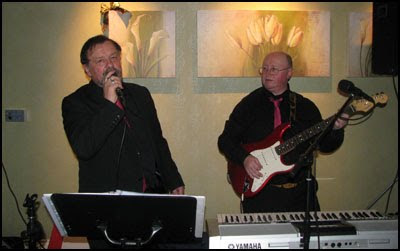 This was a pig club - a group that had reared a pig and was celebrating this night with the fruits of their endeavour. A meal of pork sausages and mash with plenty of sausages was followed by a sale of yet more sausages and a raffle - no they had other prizes for that!!!

Generously they invited us to sit with them for the meal and whilst David and I hardly ever eat much before a gig, (belching down microphones is never good...) it was an excellent meal.

Then we played for the rest of the night before slipping and sliding back on the ice to load the car in rather cold temperatures! Oh - and we were given a big bag of sausages as a bonus! They are rather yummy... 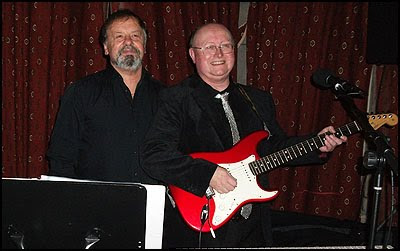 Last night we played the New Year in at Lancaster Golf Club. As I tuned the guitar just before starting I hit the end of a string with the tip of my thumb, feeling the string go right down into my thumb.

Muttering a surprised "Good Gracious!", I had to stick a plaster on the end of my thumb to avoid getting blood all down the neck of the guitar which would have gone sticky and perhaps not looked as aesthetically pleasing as I'd have liked.

Unfortunately the only plaster they could find was designed to cover the whole of the upper torso... Still, after a couple of songs I was able to take it off and apart from a mild soreness the thumb performed it's usual task of keeping the neck of the guitar pressed against my fingers with no problem! 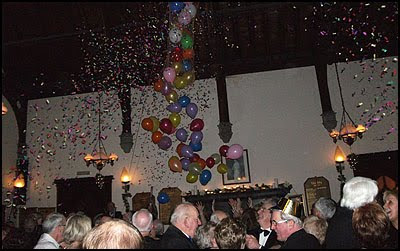 And what a night! The dance floor filled as soon as we started to play and as we counted down to midnight there were balloons, confetti, cheers, hugs and kisses all round. No sausages though...
Posted by John Burke at 09:57