In the first part of this look at family cars we saw a tiny part of Dad's Ford Popular...because no photos exist of all of it! That started a trend... 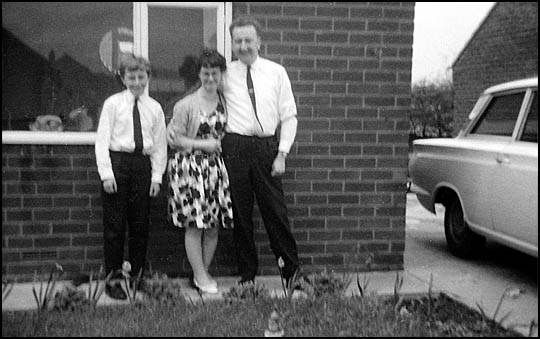 This is the only photo I can find showing his second Cortina... As a bonus it does show me, Mum and Dad, so my brother Frank obviously took it. Not a single photo could I find of the blue and white Cortina he had before this all-white one. 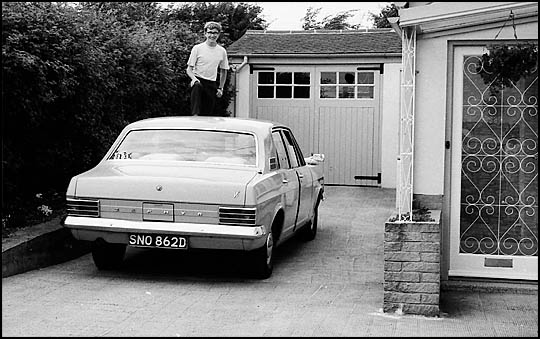 His next car was a Ford Zephyr 6 Mk IV. I apologise wholeheartedly for the twerp standing on top of it... I wonder who it is... A least that photograph shows all of the car... After a few breakdowns during the four years he had this car (average life of a car in the sixties was 80,000 miles and Dad did over 20,000 a year) he traded it in for the brand new Ford Escort Mk I. In Great Yarmouth... 220 miles from home... Because it broke down again on the way there. Unfortunately there are no photos at all of the Escort. Dad hated it anyway. After the Zephyr it was just too small. 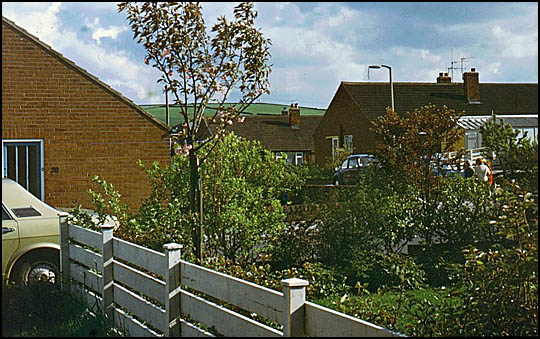 He bought another Zephyr 6. And with this we are back to photos showing just a tiny bit of the car! So away from this sad trend and Dad's cars! Let's have a look at mine 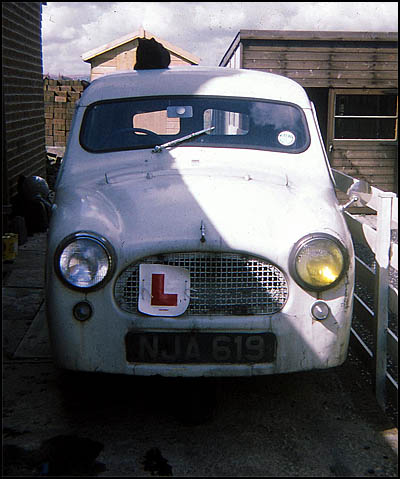 I was 16. You could drive 3-wheelers at 16. That's the only reason... ok? This was NJA 619, a 1959 Reliant Regal Mk IV van with lights of many colours as can be seen here! The seats were like deck chairs and the engine, set far back because of the central front wheel, jutted out into the cockpit of the car. This was good for two reasons. One: there was no heater but the engine got hot! Two: 11 years old was very old for a car in 1970 and the bloody thing used to break down every 15 miles or so because oil leaked into the pistons and fouled the spark plugs up... With the engine between me and the passenger, I could change the spark plugs without leaving the car in the rain!

This could have got extremely expensive but I had two sets of plugs, a rag, a file and a set of feeler gauges in the car. Whoever was in the passenger seat would clean one set of plugs and when the car conked out the new set could be installed in around 5 minutes flat, whereupon we set off again and the passenger set to work on the recently removed set of plugs!

To qualify for a 16 year old to drive it a 3-wheel car had to be under a certain weight. Unfortunately someone had put a metal sheet over a hole in the floor in the back of the van and when we had to have it weighed it was overweight. It was illegal for me to drive it, so a replacement was sought. 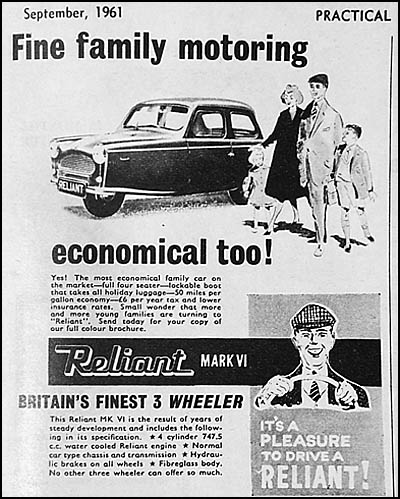 I bought a 1962 Reliant Regal Mk VI saloon next which I drove until I was old enough for a 4-wheeled car. Alex Dyson remembered this car mainly for the fact that it once did a magnificent seven miles before he had to clean up the spark plugs...

Actually I drove it until the engine bearings went and the engine crunched into the radiator, fan first with a huge cloud of steam and a wave of heat into the car. I reached for the gear lever but it wasn't there - it had disappeared - dropped through the floor... I've never seen Mum get out of a car so quick in all my life! To make matters worse a long queue of laughing people was at the bus stop just next to us...

Coming up... the 4-wheeled cars! (But the entry after that one will not feature 5-wheeled cars...)

Return to Family Memories Index
Posted by John Burke at 20:44