Creeping Bentgrass were booked to appear at Turton Tower yesterday afternoon for the launch of a Walking Festival. We will be at the Olde England Kiosk on Friday night in Sunnyhurst Wood to celebrate the end of the festival too. Though they are not that far apart come to think of it, so if it takes anyone 5 days to walk from Turton Tower to Sunnyhurst Wood then they aren't trying! Far enough that I'd not try it though! Somehow I don't think that walking from one to the other is the aim of the Walking Festival to be honest! 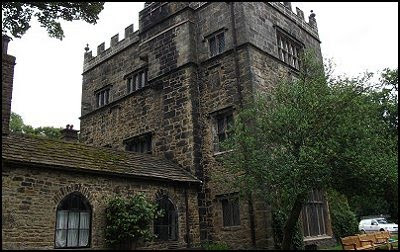 We arrived a little early in order to give ourselves time to find the venue, which I'd not visited before.

Turton Tower is one of Lancashire's old halls. The house was built during the Tudor and Stuart period in the 1600s, though by making additions to a Pele tower which had been built in 1420. It was bequeathed to the local council in the 1920s and has been open to the public since 1974. More information can be found at the website of the Friends of Turton Tower. 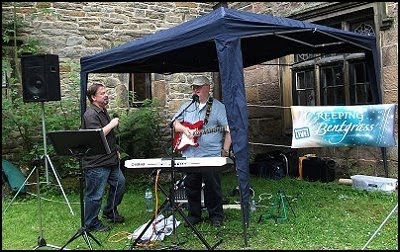 We were sited against the wall of the tower and the kitchens to the tea room (from which came a wonderful range of smells throughout the afternoon and also a peal of delicious laughter at one point - not sure what was going on, but I did ask to join in, which got a laugh from the audience! 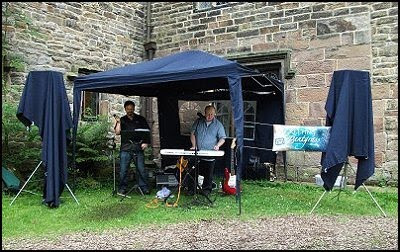 There was a wonderful view before us. Picnic benches were dotted around the grassed area where we were playing and we had a number of people listening to us throughout the afternoon, whilst over the hedges and fence opposite, woodland stretched in front of us an people walking along paths in the middle distance waved to us as they walked with family and dogs. The Mayor, who was present for the launch of the festival came to meet us and helped make it more of an occasion and the staff at the house were fantastic.

A sudden shower made us stop for a moment to withdraw under the cover of our gazebo, but we were soon set up and playing again and the audience were very brave, staying put. Sure enough it soon passed over and apart from having to shuffle a bit more backwards as the gazebo roof started to drip a bit we were fine. The sides of the gazebo were utilised to provide matching speaker covers! 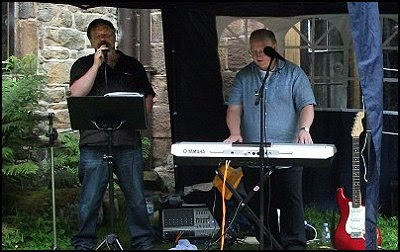 It was a wonderfully relaxed afternoon. We were on form and we had a very appreciative audience - for this type of open air gig such enthusiastic applause is rare and was very much appreciated by us. This year has been busy for us. We normally play around a dozen gigs a year but yesteday was already the 13th public performance of 2010 and there's enough in the diary to take us to twice our normal quota before the year's end.

The first gig using the new car too - all the gear went in the back without too much trouble and David and Jeannie were able to sit on the back seats without having to share footspace with speaker stands!
Posted by John Burke at 10:52